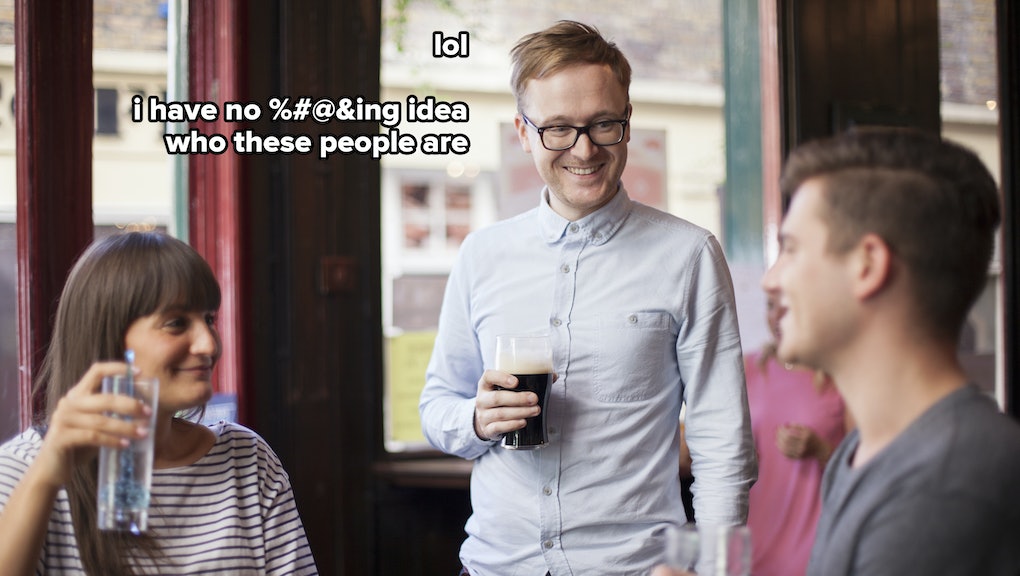 Science Explains Why You Can't Seem to Remember Anyone's Name

Admit it: You're terrible with names. They're like tiny grains of sand you can't keep cupped in your hands no matter how hard you try, and you curse your sieve-like brain when you run into someone at a party and think, "Dammit, who is that again?"

For Katie Simpson, 26, the curious phenomenon of forgetting somebody's name as soon as she meets them is simply a matter of genetics.

"My dad and I both remember faces quite well, but there are plenty of names that we don't remember," Simpson told Mic. "The joke is always, 'Yeah, I can tell you all about your life story, but your name just always slips my mind.'"

Forgetting names is "so common that it doesn't seem memorable anymore," Simpson explained. "It's mostly the feeling at big events, like networking events or holiday parties. 'I've been talking to you for 15 minutes, so sorry, what's your name?' People usually laugh about it, or you're able to blame it on [those] two glasses of wine."

In theory, a name should be easy to remember. It's relatively simple, it's often the first thing we learn about someone when we meet them and it's one of our base forms of identification.

This simplicity, however, also lends itself to indistinctness: A name usually isn't unique, even though the person to whom it's assigned is. We don't choose our name ourselves, and it doesn't convey much personal information.

"Names themselves are pretty arbitrary things," David Badre, an associate professor of cognitive, linguistic and psychological sciences at Brown University, told Mic. Badre, whose research laboratory focuses on memory and cognitive control, explained that it's much easier for us to remember facts and details when we already have a foundation for the knowledge, and when we've already established that it's something we care about.

"We don't arbitrarily stick things in file drawers in our head," he told Mic. "For someone who really likes baseball, it's incredibly easy for them to learn new facts about baseball. Part of that is because you have a big existing knowledge structure, and you can use that to learn new information. But if you're asked to memorize random things — obscure facts, for example — you don't have the benefit of knowing all those existing structures. Names are kind of the same thing."

Moreover, Badre said, if a name doesn't stick out to us immediately, we're less likely to do the work of remembering it — that is, repeating it in our heads or in conversation.

"We don't arbitrarily stick things in file drawers in our head." — David Badre

Molly Potter — a professor of psychology at Massachusetts Institute of Technology who studies attention, perception, comprehension and memory — emphasized the arbitrary and often unconnected nature of names.

"Names are usually minimally 'meaningful,'" Potter told Mic in an email. "If you're told that she's Joan Spencer or Anna Brock, there's little distinctive information to connect her to, once the sound of the name is no longer in your present mind."

Yet other things we're told only once — anecdotes, for instance, or specific personal details, like occupations and interests — are much easier to recall.

"Interestingly, we are good at remembering stories, whether in the form of gossip, novels, movies or the like, even after only one hearing or viewing," Potter said. "Presumably [it's] because they pull together individually familiar ideas into a new and meaningful structure that we can rebuild later as we think about or recount the story."

Compared to other identifying characteristics, names are low-priority. For Katie Simpson, names are far less salient than things like a new acquaintance's facial details or level of interest in the conversation.

"In my family, in some ways, it's what our brains are choosing to remember," she told Mic. "Our brains are more focused on what this person looks like or other important details about them. I'm often so busy focusing on context and more who they are as a person. [It's] what I need to know on a more subtle level."

Badre said this method makes sense. "It's about prioritizing memories. Our memories didn't evolve to remember everything. What they're there for is to remember the things we need, when we need them," he said. "When we're first meeting someone ... [our] brain is on overdrive. There's so much rich information you're trying to think about."

The stakes are higher if it's a high-stress social situation, like a work event or a party. In these settings, there are also a lot of people floating around — Simpson said it was usually easier for her to remember names during one-on-one interactions — and it can be even more difficult to keep new faces straight.

There's an odd contradiction between the commonness of forgetting someone's name and the offense it can cause. As Potter put it, "the problem is that our own name feels distinctive and meaningful, so when someone immediately forgets it, we feel they weren't paying attention to us or were not interested in us."

For Simpson, while she remembers plenty of other things about a new contact, the inability to place his or her name is a social stumbling block. "As much as we laugh it off, it does undermine that [fact of], 'Yes, I remember you,'" she said.

Take former president Bill Clinton, who is said to have a superb memory for people and experiences. In a 2004 interview, Oprah Winfrey made note of Clinton's "extraordinary memory for even the briefest experiences and for people's names and histories." His otherworldly charisma, unsurprisingly, is also legendary.

Fortunately, there are ways to be more like Bill. If you're not blessed with Clinton's oratory skills, fear not.

"There are a couple of different approaches," Daniel Wendler, the author of Improve Your Social Skills, an online guide to social interaction, told Mic. "One is just pure repetition. If you repeat [the name] immediately after you hear it, that doesn't help you all that much. But if you're able to repeat it a couple times, and in a couple of different ways, then that can help ground it more deeply."

He advised incorporating the name into a sentence — but make sure it's creative, not awkward and clumsy. "Things like, 'OK, so, you said that you're an engineer, I've never been an engineer, what's it like? If I'm Joe, and it's my first day on the job, what would that be like?'" Alliteration can also be helpful; thinking of someone as "Jumping Joe" and visualizing the person jumping up and down is more memorable than simply thinking of them as "Joe."

"If you're able to repeat it a couple times, and in a couple of different ways, then that can help ground [the name] more deeply." — Daniel Wendler, author, 'Improve Your Social Skills'

When it comes down to it, Wendler told Mic, it doesn't really matter if you forget someone's name — it happens to everyone, and most people probably won't hate you for it.

"I think it's something that's going to happen to everyone to a greater or lesser extent," he said. "This is normal. It's not a massive faux pas. You can ask them for their name again at the end of the conversation. I've never had a bad response when I've admitted that I've forgotten their name."