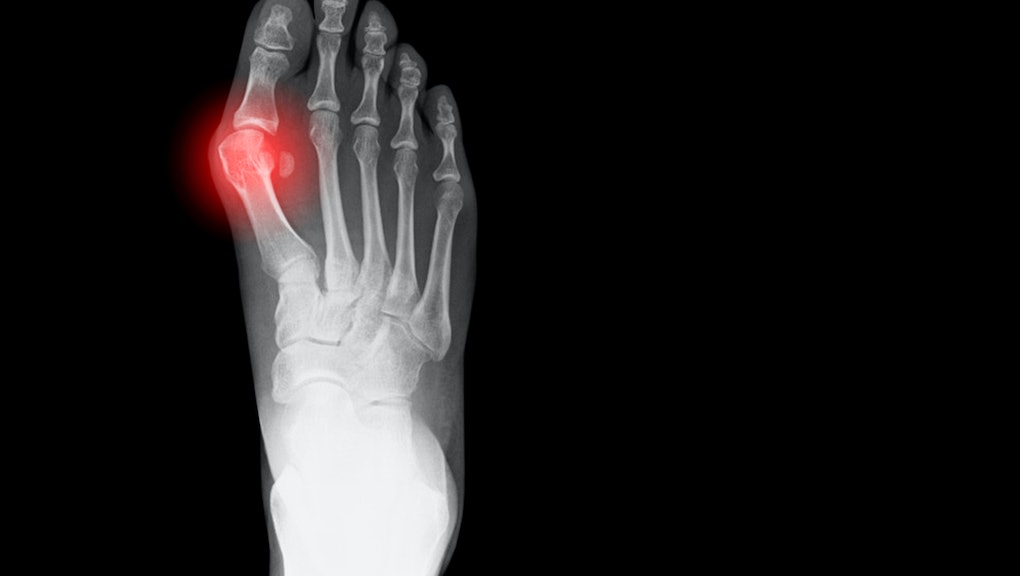 The Truth About Bunions, the Foot Problem Everyone's Embarrassed to Talk About

I call it my arch enemy. It's located at the base of my big toes.

There lies, on each foot, a bunion: protrusions of bone that make my toes bend inward at weird, sharp angles and give my feet the rough overall shape of diamonds. They sometimes hurt, sometimes don't fit into shoes. They are always repellent to look at.

Bunion shame is real. One year, before the family Hanukkah party, my mom — who also has bunions — politely suggested I put on socks so I wouldn't force relatives to witness my feet.

The summer my friends all bought gladiator sandals, I couldn't partake: My feet wouldn't fit through the straps. The salespeople would frown and attempt, half-heartedly, to convince me the straps would "stretch out."

In high school, my then-boyfriend was so perplexed by the way my left bunion jutted out my foot, he measured the angle with a protractor.

And in college, midway through a conversation with a friend, I watched a look of horror explode on her face. "What happened? Why is it so swollen?" she asked, pointing with a trembling finger down to my flip-flop-clad foot.

Maybe it's their unusual appearance, or maybe it's their ogreish-sounding name, but bunions aren't a common topic of conversation, despite the fact that they affect an estimated 23% of adults between 18 and 65, according to a study in the Journal of Foot and Ankle Research. I've talked to many folks who, upon learning I have bunions, mistakenly think my feet are covered in blisters or open sores.

"Don't people pick at them a lot?" a co-worker asked me when I revealed I was writing about bunions.

"Oh, sorry," he said. "I was confusing them with Plantar warts."

To bust all those bunion myths out there, I enlisted the expertise of Dr. Irene Loi, a podiatrist at NYU Langone Medical Center's Department of Orthopedic Surgery.

First up: The myth that a bunion has something to do with flesh-eating fungus growing your foot.

The same thing can happen on the other side of the foot, where the fifth metatarsal bone meets the pinky toe. "It's called the bunionette," Loi said.

How do I know if I'm getting a bunion?

Bunions typically begin as reddened skin over the big toe joint, according to the American College of Foot & Ankle Orthopedics & Medicine. You may also start experiencing pain in the big toe joint, or in other small joints of the foot — you might feel it when you wear tight shoes or move your toe in certain ways.

"Either before or after this occurs, a firm bump will develop on the inside of the foot, near the base of the big toe," ACFAOM's website says. "This bump will grow in size, often to the point where it is unsightly and embarrassing."

Do people get bunions because their shoes are too tight?

Actually, shoes that are pointy, narrow or have high heels can certainly lead people to develop bunions — or worsen bunions over time. But bunions can also be genetic. "It runs in the family," Loi explained.

But as ACFAOM notes, bunions themselves aren't genetic — "although factors which predispose an individual to bunions may be hereditary, the problem is an acquired one," their website says, "meaning that the patient has the ability to cut his or her risk factors."

As people age, their bunions get worse: 35.7% of adults over 65 have bunions, according to the study mentioned above.

Only women get bunions, right?

Nope. Sorry, dudes, you can get them too. Though bunions are more common among women — likely because women are the target demographic for pointy, high-heeled shoes — they're also present in 13% of men.

There's no way bunion surgery exists. Does it?

Thankfully, it does — though it's probably not fun.

After making an incision in the foot, surgeons use a sagittal saw to shave down that bony bump. Then they'll put the bones in proper alignment, fixing them in place with screws. "Don't worry," Loi said, "the screws are MRI-safe, and they won't beep when you go through the security system in the airport."

The surgery itself takes around an hour. If you include prep time and post-anesthesia care, the whole procedure takes about three or four hours.

According to Loi, "Each individual varies and everyone's pain tolerance is different." Patients can be under IV sedation throughout the surgery, Loi said, and receive local injections to numb their foot before and after the procedure. Afterward, if the pain is too great, they can be prescribed medication.

Even if the recovery process isn't painful, it could be annoying. It takes around four to six weeks, during which time you have to wear a special "post-op shoe." "Then, once the X-rays show healing signs, we will transition you into regular shoes and send you for physical therapy for the range of motion of your big toe joint," Loi said.

I'm going to go get bunion surgery this summer!

Bad idea. "Winter is the best time," Loi said, "as most of my patients love to show their feet in the summer when they wear flip flops."

Do people with bunions absolutely have to get surgery?

No! There are ways to manage bunion pain without going under the sagittal saw. Patients who wear wider shoes tend to have less bunion pain, Loi said, as do patients whose joints are more flexible. Other alternatives to surgery include anti-inflammatory drugs, steroid injections and spongy pads to cushion the spot between the bunion and the inside of a shoe.

There's even a booming industry of bunion splints.

However, if none of those things work, patients "might have to opt for surgery treatment as the last option," Loi said.

As for me, I've found ways to cope with my bunions. I haven't worked up the courage for surgery, but I have found I can relieve some pain by wrapping a hair elastic around both my big toes, which pulls them toward each other — the opposite direction to the way they naturally lean.

And I've learned to buy the right footwear. Gladiator sandals are a no-go, but flip-flops work great. In the cooler months, I wear leather boots that stretch out with wear.

Oh — and when barefoot, I stay away from any and all geometry equipment.