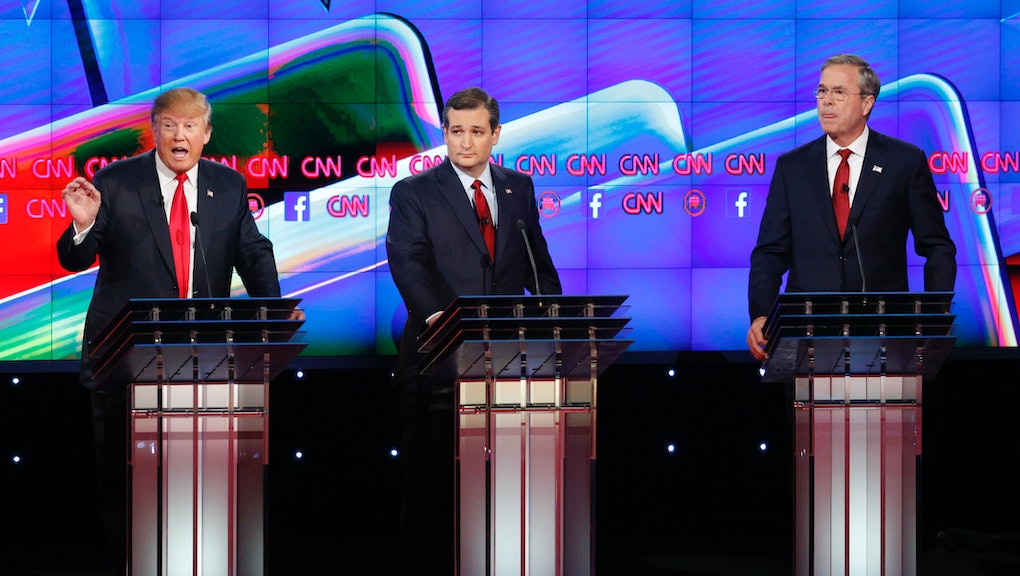 Laying into "chaos candidate" Donald Trump at the CNN Republican primary debate in Las Vegas on Tuesday night, former Florida Gov. Jeb Bush attacked what he called the "lack of seriousness" at the heart of the former reality show star's boisterous candidacy.

Sparring with Trump over how to combat the Islamic State militant group, also known as ISIS or ISIL, Bush alleged that Trump had offered little more than bluster.

"This is another example of the lack of seriousness," Bush said. "Look, this is, this is troubling because we're at war. They've declared war on us and we need to have a serious strategy."

Bush continued, "Look, two months ago Donald Trump said that isis was not our fight. Just two months ago. he said that Hillary Clinton would be a great negotiator with Iran. And he gets his foreign policy experience from the shows. That is not a serious kind of candidate."

Trump fired back not with a detailed strategy for combatting ISIS, but by asserting that his personal attributes would best equip him to defeat the group, and pivoting back to the issue of illegal immigration, long a Trump hobbyhorse.

After a tense back-and-forth, an exasperated Bush said, "Donald, you're not going to be able to insult your way to the presidency. That's not going to happen. And I do have the strength. Leadership is not about attacking people and discouraging people. Leadership is about creating a serious strategy to deal with the threat of our time. I laid out that strategy before the attacks in Paris and before the attacks in San Bernardino, and it is the way forward."

Since launching his campaign this June, Bush has bet that GOP voters would find that pitch persuasive, ultimately rejecting the personality-focused antics of Trump. That bet doesn't appear to be paying off: Amid deep-seated conservative frustrations, Trump's swashbuckling campaign is dominating the polls. Bush, the erstwhile frontrunner, is now languishing in single digits, underscoring how Trump's often substance-free appeal has remade the GOP race.