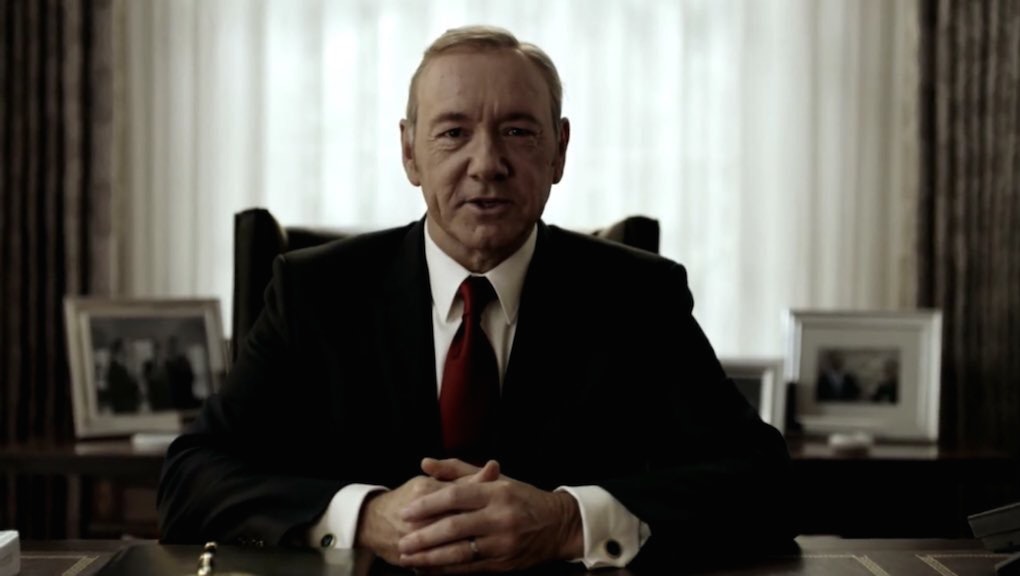 It's a new day in America. During the final Republican presidential debate of 2015, an ad played inconspicuously during the second half of the debate, as most of the audience's eyes were glazed over. House of Cards lead Frank Underwood appeared, greeting his American people and announcing his candidacy for president of the United States — in the form of a fourth season that will begin streaming March 4 on Netflix.

The House of Cards official Twitter account immediately tweeted after the surprise commercial, "It's a new day in America. #FU2016."

"It's a new day in America," the trailer begins, as shots of American landscapes and beautiful horizons fade and trumpets play. "Today, more people will go to work. Return home to their families, and sleep more soundly than ever before. All because one man refuses to settle, putting people before politics."

"America, I'm only getting started," Underwood says, appearing at the desk of the Oval Office as he seems to be signing a law into order. "I'm Frank Underwood, and I approve this message."

So many questions arise from the surprise announcement for die-hard House of Cards addicts. Will the First Lady restore her proper throne or is she planning something much bigger than ditching her husband? Is Underwood signing his "America Works" legislation into effect? What will this mean for a United States under President Underwood?

For House of Cards fans, the season four announcement seemed to take importance over the controversial fear-mongering taking place in the final 2015 GOP primary debate.