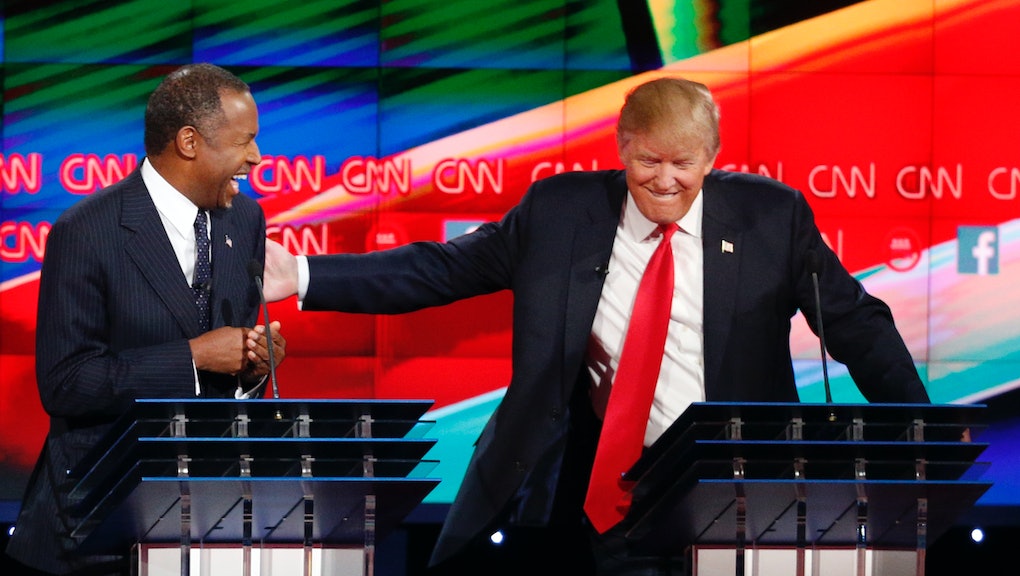 Anxious for the Next Round of Polls? Twitter Trends From the GOP Debate Offer Insight

If Twitter activity is any indication, Bernie Sanders won the GOP presidential debate on Tuesday night. Yes, you read that correctly.

Twitter Government, a Twitter-run account, is ahead of the political polls game. Keeping tabs on followers a presidential candidate acquires over the course of a debate is just as good a predictor of their success as most other polls.

It's the same strategy CNBC used after the Oct. 28 debate. "Last week during the Republican debate, we tracked in real time the number of Twitter followers each candidate gained during the debate," CNBC's Eric Chemi wrote. The social media victors were Ben Carson, Marco Rubio and Ted Cruz, and when the polls came out a week later, those three candidates saw the biggest surge in poll numbers. The network found equal success using the same strategy in an earlier GOP debate.

There is a major advantage to using this method over simply counting the number of mentions a candidate receives, which does not factor in the context in which a candidate is being discussed (e.g. "@realDonaldTrump's hair scares me" or "Wow. @realDonaldTrump just opened a can of whoop ass on @JebBush").

Comparing the number of acquired followers to the number of mentions a candidate received on Twitter exposes inconsistencies, suggesting that the numbers could be measuring different things.

One still has to take these results with a grain of salt. There remains an inherent selection bias based on the fact that certain types of voters are more likely to take to social media than others.

"Those type of data can be cluttered with people who already support a candidate rather than new supporters," Chemi wrote for CNBC. "It might also be cluttered with certain voters who just talk too much on social media, outweighing the opinions of many more quiet voters."

Of the candidates on stage, Trump triumphed in both mentions and followers, yet the ranking of candidates after that varies. Jeb Bush, for example, did not make either of the top five lists regarding new followers, yet he came in second place with number of mentions.

These data also allow for a more micro analysis of the debate, revealing the most popular moments based on what parts of the debate were tweeted about most. Though it may be hard to gauge "success" here, there is no refuting which exchanges prompted the most chatter. Anyone watching could have guessed which squabbles (all of which, naturally, involved Trump) would make the most waves on a network whose bread and butter is controversy and buffoonery — at least when it comes to politics.

Those moments, in descending order, were:

Similar initiatives have been made in using social media data to try and better gauge public opinion. One such is Mic's very own Debatemoji, which assesses which emojis are being used with which candidate on Twitter and how frequently the two are associated.

It will be a few days before the first post-debate poll is released, but until then, these little gems of insight from the Twitterverse should satisfy the most impatient wonks among us.