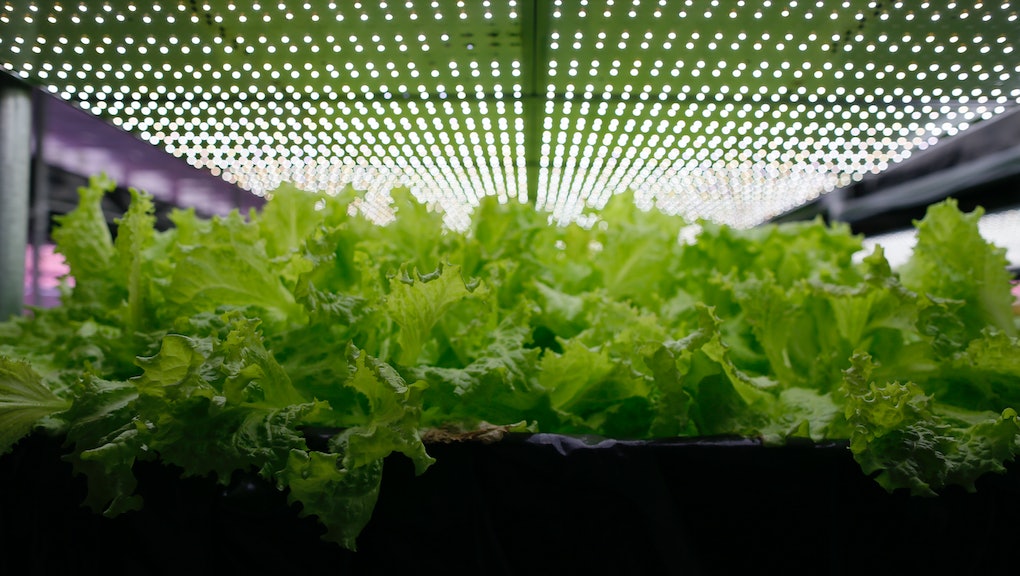 Everyone's favorite salty meat strips may cause cancer, but a new study from Carnegie Mellon University suggests they're a far better food choice than lettuce — at least, in terms of protecting the environment.

"Eating lettuce is over three times worse in greenhouse gas emissions than eating bacon," co-author Paul Fischbeck, a CMU professor of social and decision sciences and engineering and public policy, said, according to a CMU news article. "Lots of common vegetables require more resources per calorie than you would think. Eggplant, celery and cucumbers look particularly bad when compared to pork or chicken."

Fischbeck and his fellow researchers based their study on the U.S. government's 2010 Dietary Guidelines for Americans, designed to help Americans achieve and maintain a healthy weight. Among its recommendations are "increas[ing] vegetable and fruit intake," and "increas[ing] the amount and variety of seafood consumed by choosing seafood in place of some meat and poultry."

The first scenario — keeping our current food mix as is, but eating fewer calories — lowers energy use, blue water footprint and greenhouse gas emissions by around 9%, according to the study.

In other words, switching to a higher-vegetable diet was found to be more harmful to the environment than keeping our meat eating habits the way they are.

"These perhaps counterintuitive results are primarily due to USDA recommendations for greater caloric intake of fruits, vegetables, dairy and fish/seafood, which have relatively high resource use and emissions per calorie," the researchers wrote.

But before you triumphantly roast a turducken this holiday season, think again: Meat is still bad for the environment.

A chart in the study reveals the environmental impacts of various food groups. Though increasing our fruit and vegetable intake might, overall, be more harmful to the environment, it doesn't change the fact that meat, poultry and eggs still produce plenty of greenhouse gas emissions — in fact, more, per calorie, than fruits and vegetables.

"The study confirms that meat, poultry and egg food groups, as a whole, are relatively high sources of greenhouse gas compared to vegetable, grains, pulses and sugars," Antony Froggatt, a senior research fellow at Chatham House, told Mic in an email. "Therefore, reducing consumption of the former food groups, which is also recommended from a health perspective in this and other studies, can be an important opportunity of greenhouse gas emissions savings."

Meat production is harmful in other ways, too. Besides its water and energy use and greenhouse gas emissions, "there are significant implications for land use," Froggatt said. As a 2014 Chatham House study noted, around 75% of our planet's agricultural land and 23% of its arable land are used to support livestock — be it for giving animals room to graze or growing crops to feed them.

"On current trends, by 2050, more crops could be fed to animals than to humans," the Chatham House researchers wrote. "This will increase pressure on land, contributing to the expansion of agriculture into forest."

That's not all. Froggat pointed to past research suggesting the production of animal products might use more water than the production of vegetables. A 2012 study in Animal Frontiers found that "in industrialized countries, moving toward a vegetarian diet can reduce the food-related water footprint of people by 36%."

And this research, by the United Nations' Food and Agriculture Organization, suggests that globally, vegetarian diets use less water than diets containing meat.

This year, the USDA's Dietary Guidelines Advisory Committee reached similar conclusions. In its 2015 scientific report, the committee suggested that plant-centric diets are healthier and better for the environment — the first time the committee had ever weighed in on sustainability issues, as Mic reported.

"The major findings regarding sustainable diets were that a diet higher in plant-based foods, such as vegetables, fruits, whole grains, legumes, nuts and seeds, and lower in calories and animal-based foods is more health promoting and is associated with less environmental impact than is the current U.S. diet," the report stated.

One possible reason for the discrepancy between the CMU study and prior research? CMU's study looked at caloric intake, instead of comparing foods in terms of protein — a more common and accurate metric for comparison, according to this Daily Kos post.

If you were to replace Americans' bacon calories with calories derived from lettuce — as the CMU researchers' second scenario suggests — you'd have to produce a seriously huge amount of lettuce — around three full heads. That's an absurd amount for a single meal, even for the most devoted salad-eaters.

You know, now that we've hashed this out, maybe we should all just drink soylent instead.