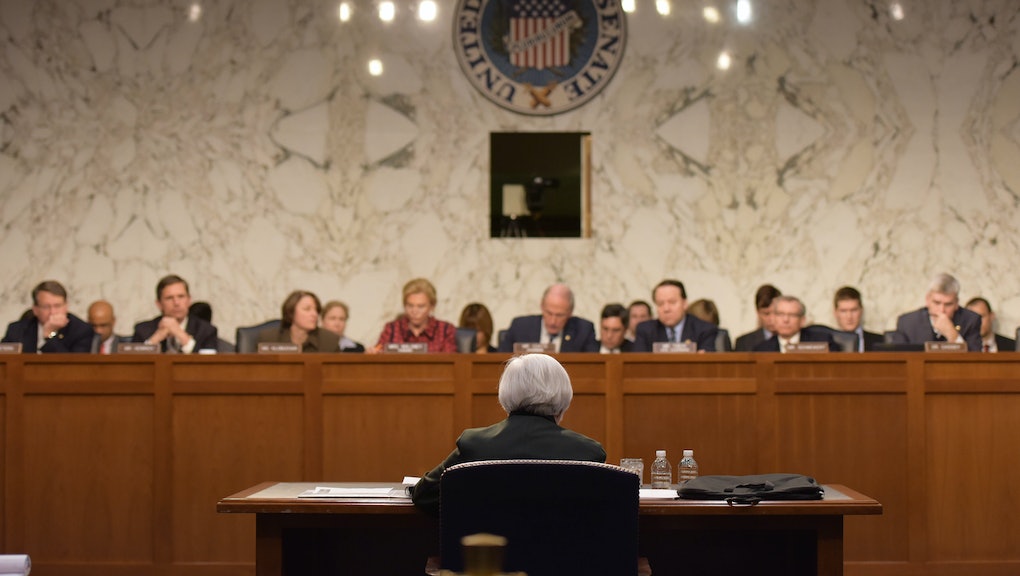 The Federal Reserve announced Wednesday it was raising interest rates for the first time in close to a decade.

Many people don't quite know what that means, and for those who have some inkling, the announced .25% bump may not seem particularly noteworthy.

But the Fed's unanimous vote — which comes after seven years of record-low rates — has enormous consequences for the economy. The rate will only go from nearly zero to about one quarter of a percent, a rate change that will be unnoticed or imperceptible to most people. But it signals something far deeper: the end of an era.

The interest rate hike, the first in nine years, means the Fed believes that the economy is in better shape than it's been in a long time. It signals that unemployment has been low enough for long enough that the Fed — and chairwoman Janet Yellen — believe a small increase is necessary to head off the possibility of inflation. Should more hikes follow this increase in the future, it could reshape the way in which Americans save and invest in the economy dramatically in the long run.

Why it matters: By increasing interest rates, the Fed is slightly dialing back the flow of new money into the economy. It's doing this to get in front of the possibility of inflation — something there are not any signs of yet, but also a phenomenon that tends to snowball rapidly once it emerges. The longer that interest rates are kept at or close to zero, the greater risk over time that inflation suddenly starts to kick up and spiral out of control. So the Fed has made the estimate that it's time to act to prevent that possibility, although in a very incremental manner.

What does that interest rate mean for today's economy? It means that most adjustable-rate debt will increase as well. On its own, the .25% bump won't have a huge impact, but if there are more increases in the coming year, it will be felt more tangibly.

Higher interest rates slow growth and dampen demand. The Fed's move means that credit card payments will be higher, and leave people with less money to spend on other goods and services. It means higher rates on adjustable-rate mortgages, leaving people with less money to spend on other things. It means that people will have a harder time refinancing their mortgages, which means less disposable income. And it means that businesses will be able to borrow less, and thus be less likely to make expansions and investments in things like a new office or equipment.

That slowing is good to prevent the economy from overheating when there's very strong wage growth, but that's something a number of progressive economists think that there are not yet any signs of. And they fear the Fed's decision is premature.

"You're supposed to raise interest rates when unemployment is too low, workers are making too aggressive wage demands and getting them and they're threatening to set off wage and price inflation," Josh Bivens, research and policy director at the Economic Policy Institute, told Mic. "That is just not the economy we have today, so I'm not sure why we're going in that direction."

Bivens says he believes the rate increase doesn't in and of itself threaten economic growth or demand in the economy too much, but that further increases could "keep the economy from improving the point it has today."

Wednesday's decision to increase interest rates isn't something that everyone is welcoming, given the fact that the economy is still not humming at the pace that it could be. But it's a vote of confidence from the government that things are normal and stable — something that seemed almost unfathomable in the not-too-distant past.