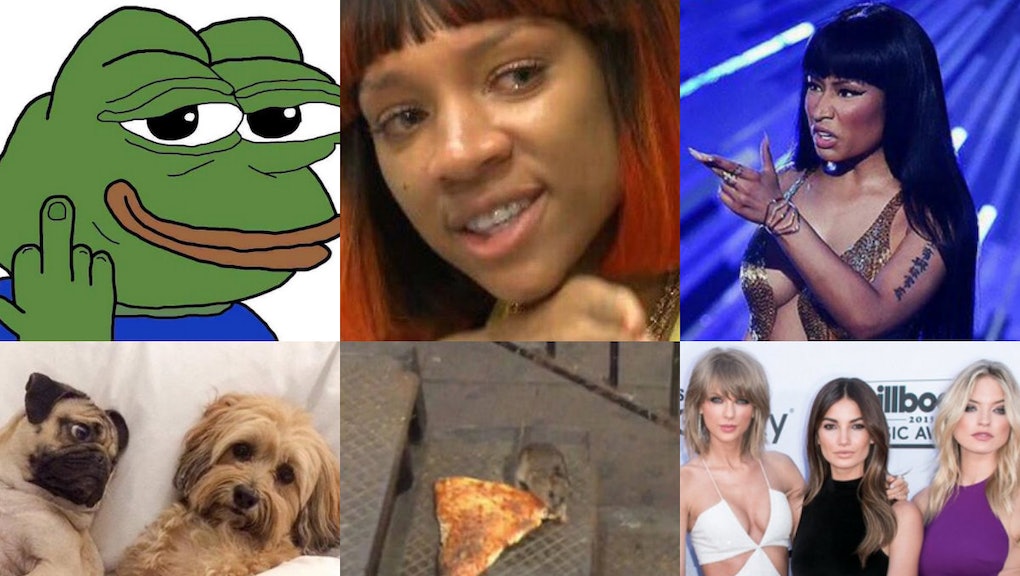 Though it would seem like online communication would get more complex as time went on, it's actually become quite efficient: Nowadays, people can express powerful emotions with just a few clicks thanks to GIFs, emojis and viral memes.

In fact, Oxford Dictionary's Word of the Year isn't even technically a word — it's the "tears of joy" emoji, proving that much of the world is consumed in the new art of internet expression. Luckily for avid internet users, 2015 was a year for anyone interested in joining in on internet jokes, with countless memes being created each week to highlight trending topics, controversial moments in pop culture and other hilarious absurdities.

Though the list is endless, here are 13 of the best memes to have circulated the world wide web in 2015, from Lil Mama's tearful radio interview to Katy Perry's infamous left shark appearing behind just about anything.

Pepe is the cartoon frog in all of us.

Lil Mama's sad moment on a radio show years ago was unearthed in 2015, and will now live on forever.

He was just trying to bring a little extra cheese home for the family when a passerby snapped a pic. Now, the New York rat is on his way to the White House, apparently.

2015: the year Black Twitter discovered their favorites actors have been type-casted this whole time.

Girl, you need to never wear those again. Ever.

6. This could be us but you playin'

Some people went to new extremes to prove their love for each other on social media. Others wished they could do the same — or they were just busy eating.

Nicki Minaj made MTV Music Video award history when she called out "this bitch that had a lot to say," Miley Cyrus. Her final three words have now become a phenomena of their own.

See also: Ten minutes into "Netflix and chill" and he gives you this look.

2015 finally took a turn for the best when Adele triumphed T-Swift as the Queen of #SquadGoals.

Twitter users showed you how to really nail any audition.

When a few photos from the Pope's international travels seemed to show the pontifex spitting some fire bars, the internet did not waste time.

Everyone already knew the Queen slays in dance numbers, but who knew she stayed on the beat with songs she's not even dancing to?