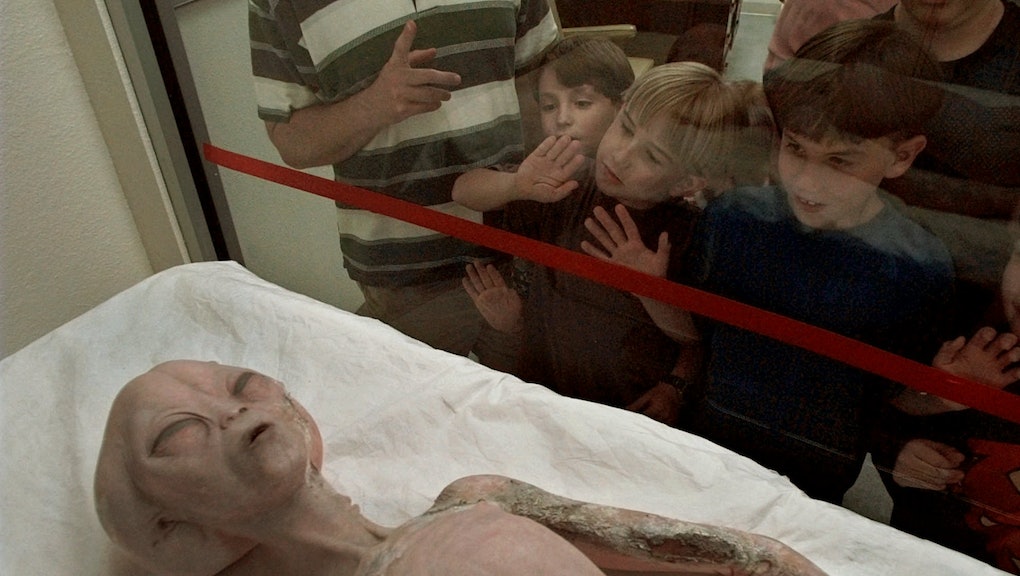 Are Aliens Real? Here Are 6 Images That Have People Believing In Alien Life

For earthlings, the existence of life on another planet is an age-old question. Before launching into space Dec. 15, British astronaut Tim Peake told the Guardian the world is most likely close to discovering single-cell organisms that live on other planets — only they won't be little and green like pop culture depicts. Or will they?

NASA agrees, but sets the deadline at 2045. In order to verify life on planets, astronomers need to understand how the compounds on other planets and the stars surrounding them work, according to a 2014 NASA article. Hint: That has yet to happen.

But that doesn't stop the Internet from going crazy whenever a slightly suggestive photo surfaces. Below are six images taken by NASA and civilians that still have people believing there's life elsewhere.

1. The pyramid-like structure located on Mars was captured in May, according to USA Today. While it may just be a geometrical coincidence, some believe it to be evidence of an alien civilization.

2. Also in May, NASA's Curiosity Rover recorded a figure that looked similar to woman, CNET reported.

3. Perhaps one of the most famous alien-to-earth encounters was the 1947 Roswell, New Mexico, incident, in which an unidentified flying object crashed in the desert, according to the International Business Times. It was later explained to be a government spy-testing balloon, but true believers think that's just a cover-up. Still, the area is a notorious hotspot for alleged alien activity.

At a UFO conference in May, old pictures of the body of an alien-like creature that were recently discovered were presented. But a closer inspection revealed that it might be a small mummified child with a placard from the San Francisco Museum instead, the U.K's Metro reported.

4. In 1976, bright objects were seen flying over Tehran, Iran, prompting the military to send jets out for interception, Forbes reported. Apparently, the jets' communication and weapons systems were rendered useless from an unknown cause.

5. Dubbed "Mars Henge," this circular formation of objects on the surface Mars was captured earlier this year by NASA, according to the Huffington Post.

6. In November, a California woman found a strange two-legged creature in her backyard. Reddit users were quick to answer that it could just be a deer fetus and not ET.