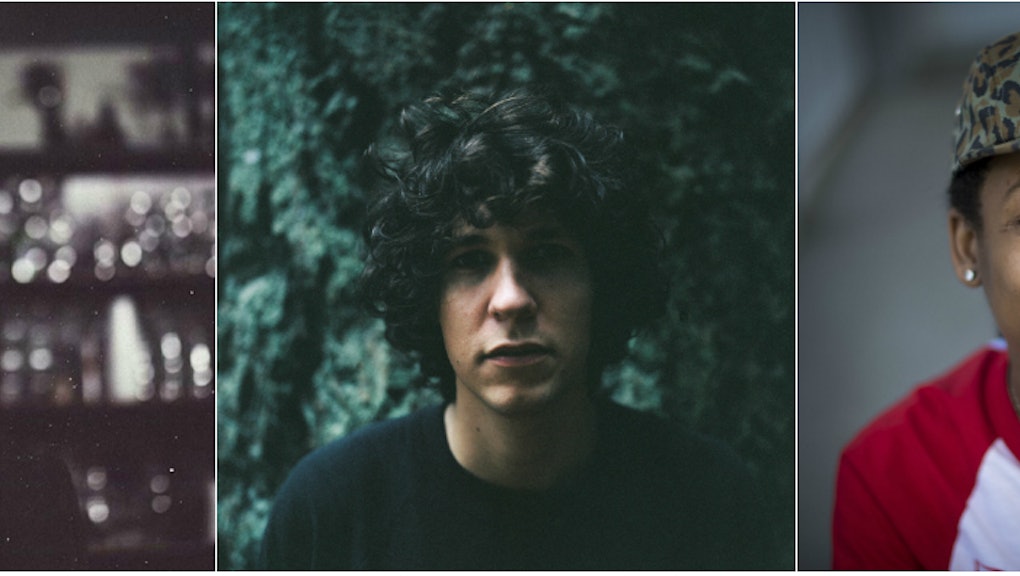 Behind almost every pop artist, there hides a host of unsung talents.

Songwriting, producing, engineering — so many ingredients go into crafting a high level pop song. Few artists can take the Prince route and do it all themselves, and few should try. There's no shame in collaborating. That fusion of talents can bring out some unexpectedly potent mixtures, as so many of this year's top tracks prove.

Here are 11 of these artists who have contributed to major songs being celebrated on year-end lists and articles across the internet, but who are not seeing their names get top billing. They deserve a long slow nod of appreciation.

While interviewing Tobias Jesso Jr. for the Guardian in November, Adele described him as her "secret weapon."

"I absolutely loved him; his vibe, his humor, the way he plays piano," she said. "I'm definitely going to work with him again."

Jesso got his start back in 2013, when he sent a demo to JR White, bassist for the now-defunct indie band Girls. White, along with Patrick Carney of the Black Keys, helped Jesso record his debut album Goon, which dropped in March. He prides himself on his talents as a writer and a piano player over those as a singer, which makes him a perfect match for Adele, whose vocal talents are unparalleled.

"I often compare my voice to an old car you're only 50% sure will turn on when you need it to," Jesso told Adele for the Guardian. "Writing is a bit easier for me."

Architect of the enormously popular, lean-addled trap sound that's everywhere in modern hip-hop, Metro Boomin masterminded two number one records in 2015: Future's Dirty Sprite 2 and Drake and Future's What a Time to Be Alive. He executive produced and produced the majority of the beats on both albums.

Boomin, real name Leland Wayne, has been a fixture in the Atlanta hip-hop scene ever since relocating there from St. Louis in 2012. The first well-known rapper to spit over his beats was OJ Da Juiceman, who helped introduce him to Gucci Mane, someone Wayne majorly credits for helping him get his start.

"[Gucci] has a great eye for talent, and he's such a big influence on all of us," he told Complex in October. "Everybody looks up to him in a way, even as far as rapping or whatever. He was really the only nigga of his status, like we always looked at him as a legend. [He's] the only legend to reach down to us."

At only 18 years old, Ebony "WondaGurl" Oshunrinde has already had several beats featured on some of the biggest rap albums in recent memory. In 2013, one of her beats anchored "Crown," a song on Jay Z's Magna Carta Holy Grail. Around that time, she mentioned that Drake was her next target in an interview with MTV. This year, she made it happen — by sending the beat through an Instagram direct message.

"It keeps making me want to work harder," she told MTV. "Then I'll get closer to all my other dreams, too. I'll get closer to Kanye [West]." Now that's she's become an integral part of Travi$ Scott's camp — who's affiliated with West's G.O.O.D. Music — that may happen very soon.

Major 2015 hits: Kendrick Lamar's "King Kunta," "These Walls" and "The Blacker the Berry"

Jazz man Terrace Martin has been working with Kendrick Lamar ever since the beginnings of Lamar's career as a young signee on Top Dawg Entertainment label. Martin's also had his own solo career releasing hip-hop-tinged jazz records, such as 2013's 3ChordFold, while working with closely with other big names in jazz like Robert Glasper and Thundercat (Martin's cousin).

In an interview with Billboard, Martin said that outside work inspired Lamar to begin experimenting with integrating more jazz and '70s funk into his West Coast sound. "Kendrick took a liking to the page that we had been on," Martin said. "And was like, "You know what? Let's make that page bigger with my influences and your influences, and let's do something that we all never did.'" The result was To Pimp a Butterfly, one of the most unanimously beloved albums of 2015.

Max Martin is the Andy Warhol of modern pop. He mass produces radio hits like Warhol did Campbell's cans back in his Factory days. Martin has been honored as ASCAP's songwriter of the year eight times, including this year. He also won a producer of the year Grammy for co-writing and producing tracks off Taylor Swift's 1989, Ariana Grande's My Everything, and her rival Katy Perry's Prism.

He may do exactly the same this year for helping facilitate the Weeknd's transformation into a chart-topping pop star. The Weeknd went to the right person.

When Justin Bieber first heard the melody that Jason "Poo Bear" Boyd had come up with for Skrillex and Diplo's "Where Are Ü Now?" he was a little skeptical. "It was actually super weird for me at first," Bieber told the New York Times. "I was like, 'This is wrong, Poo Bear.' He was like, 'No, it's right. It's wrong right.' I just had to get used to it." The song ended up starting off Bieber's comeback on the right foot; the eight other songs the two collaborated on for Bieber's Purpose sealed the deal.

"I spend a lot of time writing and creating music, but the most important thing is bringing those vocals out of these artists, having them do stuff that they never knew that they were capable of doing," Boyd told the Examiner of his methods back in 2013. "They know that when they leave the studio, they are going to sound better than they've ever sounded before."

Earlier this year, he also shared two solo songs on his SoundCloud: "Beats 2 Make Love 2 (Intro)" and "To Do List."

Major 2015 hits: D'Angelo's "The Charade" and the Hamilton cast album

The Roots did not release a record in 2015, but the group's drummer and helmsman, Questlove, kept busy musically by helping to actualize some very important projects.

A longtime D'Angelo collaborator, from way back when the Soulquarians were a functioning writing team, Questlove worked on the long-anticipated Black Messiah writing music and laying down drum tracks. The grooves he helped conjure with bassist Pino Palladino are one of the album's most standout features, "the kind of bottom they already change up as flexibly as anyone in the pop sphere," famed rock critic Robert Christgau wrote.

Questlove also worked on the Hamilton cast album, with Roots' MC Black Thought producing the record and acting as somewhat of an emissary from the hip-hop community. "When I talk to Lin, or when I sit in the presence of the thing he has made, I feel the spirit of hip-hop," Questlove wrote of the project for Rolling Stone. "Without straining yourself, you can see all the way down to the idea. Hip-hop and Broadway have met now, and shaken hands, and both have walked away elevated."

Ariel Rechtshaid has one of the most diverse sets of production and writing credits to his name. He's written and produced for indie acts such as Vampire Weekend, R&B acts like Blood Orange, all the way through the EDM reggae of Snoop Lion and Major Lazer. This year was a pop-focused one for Rechtshaid, contributing to Adele and Carly Rae Jepsen's most-recent records. He also appeared playing bass beside Jepsen when she performed on Saturday Night Live in April.

A seasoned professional, working on Adele's "When We Were Young" still shook Rechtshaid to the core. "You know Adele for being a phenomenal singer, but it floored me to hit record and hear that [voice] come through speakers," Rechtshaid told the Fader. "It was maybe one or two takes, honestly. The first line came through, she nailed the emotion, and then she just took it all the way home."

His voice actually appears in the background vocals of "When We Were Young" — likely the "first record that I've produced that my voice has wound up on," as he put it to the Fader.

Quentin Miller started a very public conversation about the validity and value of collaboration in July, after rapper Meek Mill accused Miller of ghostwriting Drake's "10 Bands." Meek Mill claimed he had a reference track of Miller rapping the lines, which Drake end up taking word for word for the song. It launched the two rap stars into a messy beef that played out in diss tracks, tweets and PowerPoint presentations, and Miller faded into the background.

Miller defended himself in a Tumblr post. "We came together and made something special," Miller wrote. "I am not and never will be a 'ghostwriter' for Drake. I'm proud to say that we've collaborated, but I could never take credit for anything other than the few songs we worked on together." What hip-hop does with the revelation that rappers often bring in lyrical collaborators in the same way pop stars do remains to be seen in 2016 and beyond.