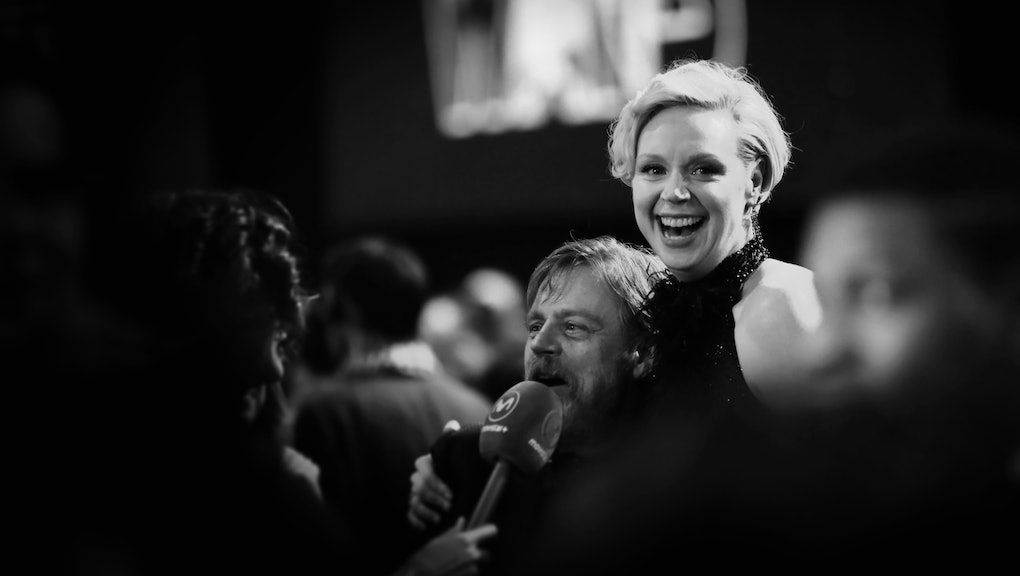 Amid all the press tour stops and concerns about spoilers, it's easy to forget there's a brand-new Star Wars movie coming out this weekend. After all the hype has died down, the movie will exist on its own merits — and judging from early reviews, it'll be a pretty great one.

One of the elements that makes it stand out already is the casting. Not only did director J.J. Abrams bring back veterans like Harrison Ford and Carrie Fisher to play Han Solo and newly appointed General Leia, he filled the younger ranks with fresh, exciting choices. There's John Boyega playing a Stormtrooper defector, Daisy Ridley playing new protagonist Rey and Lupita Nyong'o as the pirate Maz Kanata. Instead of merely filling roles with white men, Abrams looked to represent what a real galaxy far, far away would look like.

Perhaps no choice is more interesting, though, than Gwendoline Christie as Captain Phasma. As one of the members of the Empire-esque First Order, the character is one of the main antagonists of Star Wars: The Force Awakens — an unusual role in the franchise as a woman. Christie is playing the series' first female villain, all while covered in a suit of armor.

"I was thrilled it hadn't been feminized or sexualized," Christie said during Thursday morning's European press conference. She described Phasma as someone who is "functioning and ruthless."

Phasma is not a supervillain in body-tight spandex posing ridiculously. She is a warrior and an enemy, fighting against a resistance effort with a female Luke Skywalker figure (Rey) and a female general (Leia).

This may seem simple, but it's actually quite revolutionary. In a Hollywood where parts for women are still in distressingly low supply, to have female characters taking such key roles in what's sure to be one of the biggest blockbusters of all time is a major step. It's also a smart move for the movie's box office longevity — not that it will need it, of course.

Abrams isn't directing the eighth installment in the Star Wars franchise, but one hopes his successor Rian Johnson heeds his example. The Force Awakens increasingly looks like a Star Wars film for the 21st century. When it succeeds, it should inspire other franchises to do more.