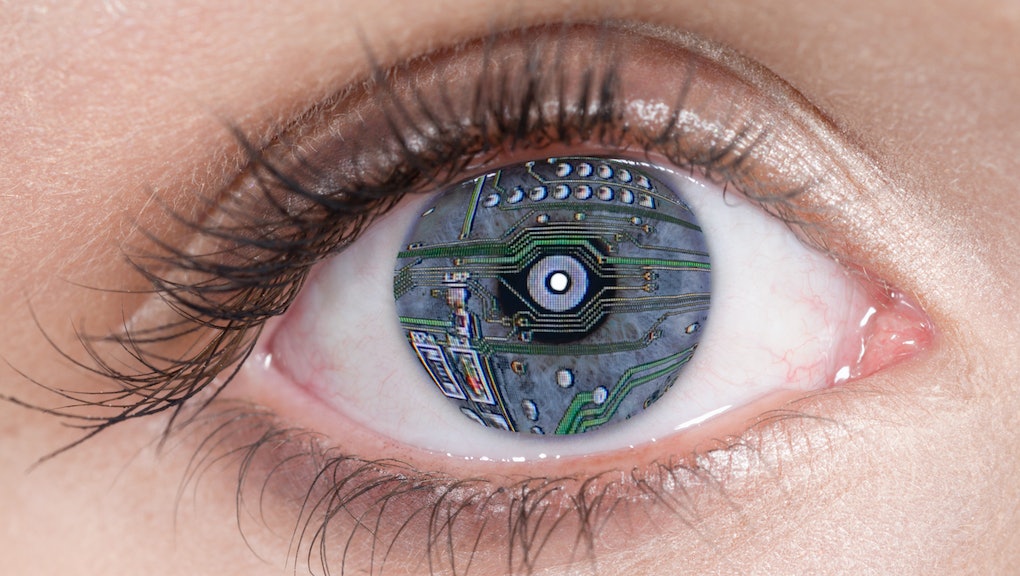 A New Bionic Eye Could Send Images Directly Into Your Brain

Bionic eyes, they're watching you.

A breakthrough from Monash University professor Arthur Lowery could do away with the need for organic eyes entirely. His concept features a camera mounted to a pair of glasses that bypasses your eyes and sends images straight into your brain.

Of course, skipping over the need for eyes comes with some heavy lifting from whatever neurosurgeon's tasked with the job.

According to New Scientist, 11 small tiles, each with 43 electrodes — enough to create a crude, 500-pixel image — would need to be implanted into areas of the brain that deal with vision, like the cerebrum, visual cortex and the occipital lobe, which hangs out in the back of your head. Part of the skull is temporarily removed, and the tiles will be placed directly onto the visual cortex. When the tiles are triggered and the brain areas are stimulated, the brain, over time, will teach itself to interpret the signals as sight.

"The processor is like a cartoonist," Lowery told New Scientist. "It has to represent a complex situation with minimal information."

It's invasive. But by the end of the procedure, you wouldn't even need retinas — or an eyeball at all — to take in the world around you. The glasses would give sight to people with different forms of vision impairment, like glaucoma and macular degeneration, and anyone with trauma- or disease-damaged optic nerves.

According to Lowery's Monash Vision Group, the direct-to-brain setup could even be used in tandem with existing, healthy vision systems to shore up any weakness in areas of the person's vision.

So far, Lowery doesn't know if the process will work in people who've been blind since birth. But the volunteers, many of whom will have sight loss from injury, should wake up with the vision equivalent of a TV from the 1920s, Lowery told New Scientist. It's not much, but it's a step toward what's literally a brighter future.