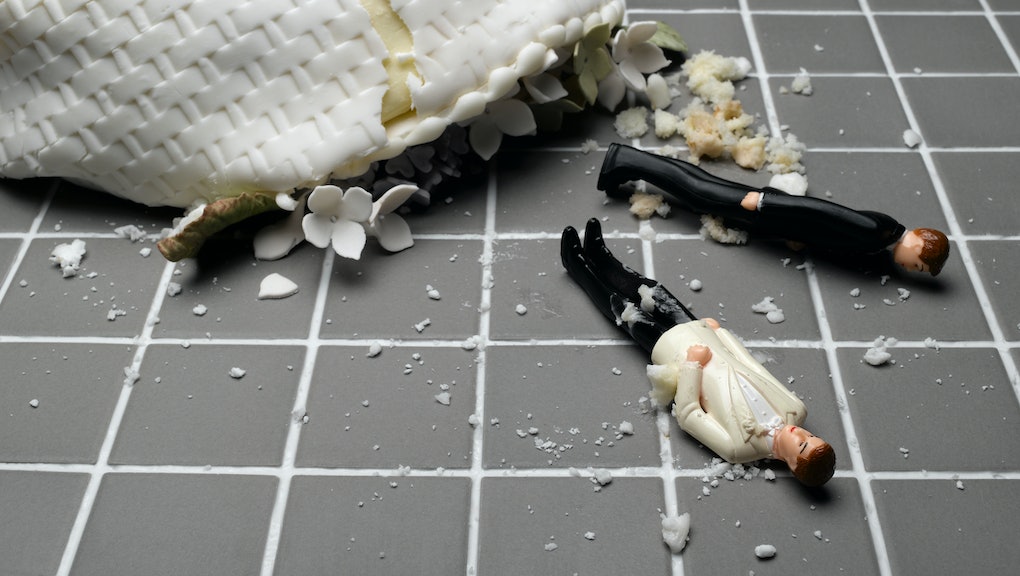 Just in time for Christmas breakup season, a new startup is here to place bets on how long it will take your marriage to shatter into a thousand little pieces. Or in the company's own words, its goal is to "reward everlasting marriage." Same diff, really.

SwanLuv has yet to officially launch, but its website indicates that it has a pretty unique business model: Give engaged couples some cold, hard cash (up to $10,000) for their weddings, then charge them the same amount plus interest if or when they later get divorced.

"Oh, you'll never, ever be one of those couples that winds up filing for divorce?" they seem to be asking potential customers. "HOW MUCH YOU WANNA BET?"

We can't be 100% certain that this is actually going to be a thing, as SwanLuv has yet to return Mic's request for comment. Yet for obvious reasons, the site has been generating quite a bit of buzz around the web.

Co-founder Scott Avy told the Washington Post that the intention behind it isn't to profit off of peoples' divorces, but rather to encourage more couples to work it out and stay together for life, as, say, a pair of swans might.

"That's what we're trying to get behind, everlasting marriage... We're not forcing anyone to sign up. The feedback has been overwhelmingly positive. I've gotten hundreds of emails telling me how meaningful this is."

Meanwhile, the website's FAQ section explains that it plans on generating revenue by selling advertising and using the divorce income (sigh, "divorce income") to help fund the next round of newlyweds. SwanLuv also claims that it plans on having marriage counseling available for people who have marital issues down the road, but don't want to go through the hassle of coming up with $10K to pay the company back. How magnanimous of you, SwanLuv!

There are a few ways at looking at this concept. On one hand, it could be viewed as a way to encourage folks to understand just how big a commitment marriage is, and to only tie the knot if they're 100% certain they've found their #Swan4Lyfe. On the other hand, it could very well be a cynical marketing stunt. And on the other, other hand, how does anyone really know if they've found their one #Swan4Lyfe, anyway?

Assuming that SwanLuv is, in fact, a thing, the truth is that there might not be that large of a market for the startup in the first place. Recent data has suggested that divorce is actually on the decline these days (the latest reporting from the Centers for Disease Control puts the rate at 3.6 divorces per 1,000 people, down from 4.7 in 1990), as is marriage: According to a study from Demographic Intelligence, by 2016 the marriage rate will fall to 6.7 per 1,000 people, the lowest level to date.

But even though fewer people are choosing to tie the knot than ever, people are still getting married: the CDC reports that there were 2 million American marriages in 2014. When you consider the fact that the average wedding now costs more than $31,000, it makes sense that young couples might seek out new, unconventional ways to help foot the bill — and why SwanLuv might see the marriage industry as a business opportunity.

Either way, the company seems to have struck a positive chord with at least a few soon-to-be-newlyweds. "We think Swan Luv is amazing!" says one excited couple in the site's testimonial section. "It is so comforting to know that with the major expense of the wedding that we could potentially receive a great amount of help. We appreciate the pay-it-forward mentality and that the concept of the site is hopeful for love."

Here's hoping they feel the same way in 10 years.