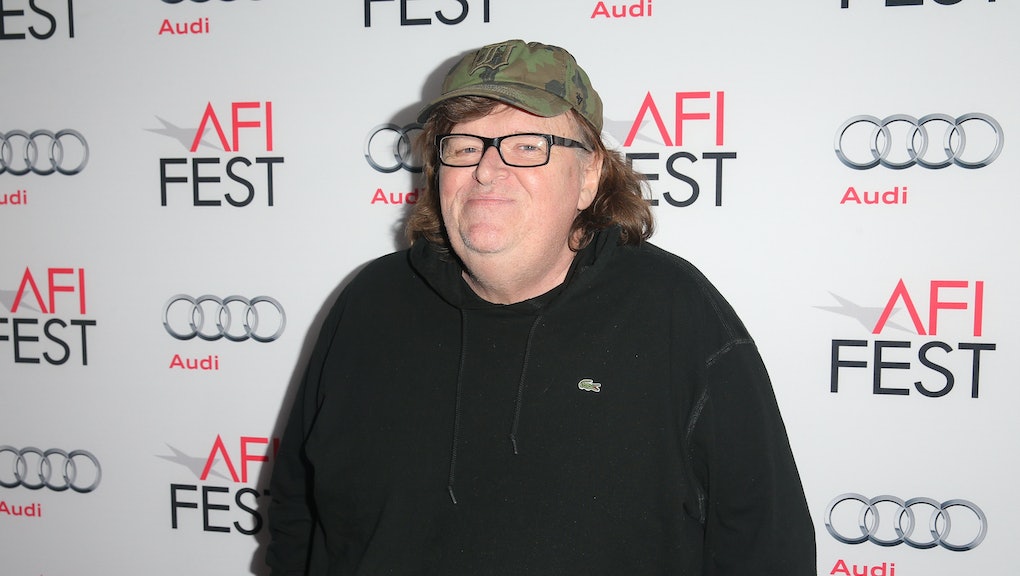 Filmmaker Michael Moore has a clear message for 2016 Republican presidential candidate Donald Trump. Late Wednesday evening, Moore posted to his official Facebook page a photo of him standing in front of New York City's Trump Tower holding a sign that read, "We are all Muslim."

Moore also included in the post an open letter he wrote to Trump after he got home from the stunt.

In the letter, Moore recalls the time he and Trump met in November 1998 on the set of a talk show. Though the two had never interacted, Trump seemed nervous to appear with the documentary filmmaker. Moore hadn't yet produced some of his biggest hits, like Fahrenheit 9/11 or Bowling for Columbine, but he had already made several documentaries examining America's socioeconomic issues, which may have given the mogul pause.

Moore recalled going up to Trump to assuage his fears about meeting him on the show:

And so, as you may remember, I did. I went up and introduced myself to you. "The producer says you're worried I might say or do something to you during the show. Hey, no offense, but I barely know who you are. I'm from Michigan. Please don't worry — we're gonna get along just fine!"

You seemed relieved, then leaned in and said to me, "I just didn't want any trouble out there and I just wanted to make sure that, you know, you and I got along. That you weren't going to pick on me for something ridiculous."

Moore said he was surprised the billionaire mogul from Queens "seemed like such a fraidey-cat" and remembered leaving thinking he was "a wuss."

Moore connected his experience with Trump in 1998 with the now-presidential candidate's current fear of a new bogeyman: Muslims. He wrote:

And now, here we are in 2015 and, like many other angry white guys, you are frightened by a bogeyman who is out to get you. That bogeyman, in your mind, are all Muslims. Not just the ones who have killed, but ALL MUSLIMS.

Moore said that the U.S. is no longer a country of "angry white guys" and pointed out a statistic, which he did not source, that 81% of the 2016 electorate is either female, a person of color or a young person between 18 and 35.

"In other words, not you," Moore said. "And not the people who want you leading their country."

Moore ended his letter by decrying Trump's call for a ban on Muslims entering the United States, saying, "If you want to ban Muslims, you are first going to have to ban me. And everyone else."

Moore called attention to Trump's consistent rhetoric of "toughness," which the candidate repeated over and over in describing himself and jabbing fellow candidate Jeb Bush during a debate on Dec. 15.

American people want to elect a leader who is compassionate, Moore said, and "at least strong enough not to be all whiny and scared of some guy in a ball cap from Michigan sitting next to him on a talk show couch."

Moore ended his letter by asking readers to sign a petition on his website that calls for Trump to re-evaluate his position against Muslims.