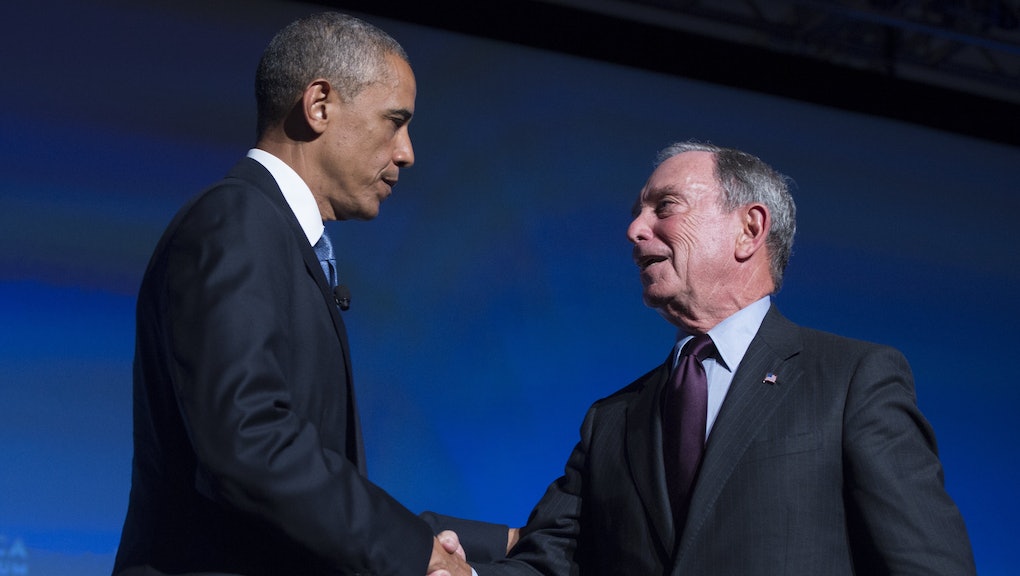 On Wednesday, President Barack Obama met with former New York Mayor Michael Bloomberg to talk about gun violence. Specifically, the pair talked about what can be done to end the threat that America's loose standards for access to them poses to public safety.

"The two discussed ways to keep guns out of the hands of those who should not have access to them, and what more could be done at the state and local level to help address gun violence in America," the White House said of their meeting.

The president's meeting, held with perhaps the most influential gun control advocate in the nation, was a good opportunity to discuss lobbying strategy in light of the rash of mass shootings in 2015 that have sparked a renewed push for ambitious gun control legislation among reformers.

It also serves as a reminder of the unique political path toward any realistic change on gun policy, when Congress has proven almost pathologically incapable of passing even modest gun reform after years of debate on the matter.

Bloomberg's clout: In 2014, Bloomberg pledged to spend $50 million on efforts to sway battles over gun policy on the state level, backing organizations committed to policies like expanding background checks. So far, the effort hasn't been hugely successful in achieving results, but he is of course fighting an uphill battle. The National Rifle Association boasts millions of members, spends tens of millions of dollars every election cycle and deftly channels the preferences of huge swaths of the population who are fiercely protective of America's gun culture and rights.

Obama, who has pleaded to the public and Congress to rally for meaningful gun control for years, has decided to take matters into his own hands. His administration is in the process of readying an executive order designed to close what's commonly called the "gun show loophole," a gap in current law that allows people to purchase guns from private vendors — most notably at gun shows — without being subject to a background check. CNN reported that the White House has struggled to develop the legal argument for the executive order so far, but Valerie Jarrett, a senior adviser to Obama, says that it should be released in "short order."

Obama is waging a lonely battle. Despite the fact that in 2015 there have been more days with mass shootings than there have been days without them, he has no reason to be optimistic that Congress will act on calls for gun control reform. In 2013, in the wake of the Sandy Hook massacre that rattled the nation, Congress failed to pass expanded background checks on gun sales, despite the support of nearly 90% of Americans.

Recent polling suggests that things may be worse now — one recent poll found support for an assault weapons ban to be at its lowest level in two decades. That doesn't bode well for legislation calling for just that, introduced by congressional Democrats on Wednesday.

Terrorism is top of mind for the public, and there's a vibrant debate going on among policymakers and in the presidential race on how to manage the rise of ISIS. But figuring out a way to control the purchase and flow of guns, which are far more lethal for the country, shows little sign of gaining traction. It seems to be the American way.