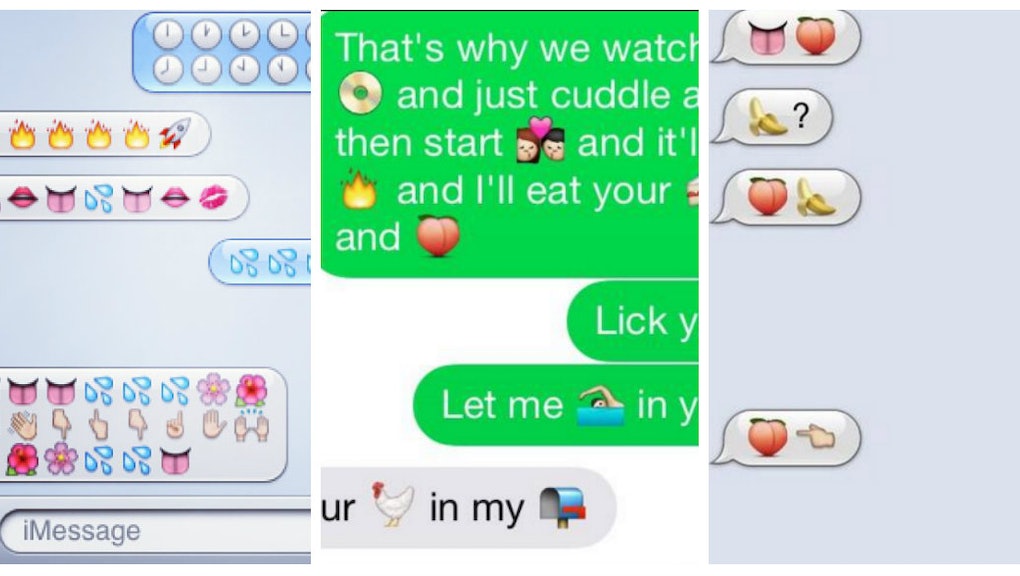 Beyond the Eggplant, Here's How Emojis Are Making Us More Sex-Positive

Sarah*, 23, is very proud of her preferred 8== [closed fist] ==D [water droplets]. Anna, 28, enjoys [finger up] [cat with heart eyes], "which is probably really weird because one is a cat face but I just use cat emojis more than regular ones." Phillip, 24, goes for [boy with chin on hands] [volcano] — because, he jokes, "it looks like me!"

The emojis one uses to describe the act of self-pleasure aren't just a silly way to turn the recipient on or make them smile — it's a mark of individual creative expression.

Even in our relatively sex-positive society, talking with a partner about the ways that we touch ourselves is taboo. But the dick-tionary of emojis hiding in our phones, waiting to help us express our deepest and raunchiest desires, is helping to open up that conversation.

"Emojis and GIFs are a total boon to sexual communication," sexologist Timaree Schmit told Mic. "They bridge the gap that is created by the lack of nonverbal cues we get in person: facial expressions, body language, tone of voice. And they are a great way to put yourself out there without full sincerity."

Writer Amanda Hess also told Mic that emoji use has opened up the dialogue surrounding sexual pleasure. "A lot of the ways we talk about sex are partially clinical, and come from medical or anatomical terms," Hess said. On the other end of the spectrum is overtly porny language, but that often doesn't feel right, either.

Texting "I'm touching myself" feels a little flat for many sexters; the term lies somewhere between banal and antiquated. But sending over a hand, a flower, and a winky face feels like the start of something beautiful and exciting. "There's something more joyful about using these little colorful images instead," Hess said.

The curiosity gap between using emojis for sexting and, say, sending nudes also adds to the appeal of the former. Sending a dick pic or a topless photo can be thrilling, but the practice brings with it a certain level of risk: in addition to the possibility of photos getting leaked, there's also the danger of sending a lurid photo of your genitalia and not getting one in return.

In all their bluntness, nudes leave less to the imagination, says psychotherapist and sexuality counselor Ian Kerner. "What gets lost in the art of sexting is the courtship, the building of arousal," he told Mic. (It appears that others agree: According to a recent BuzzFeed poll, the majority of participants had never sent a nude photo of themselves.) Emojis can bring a coy suggestiveness to sexting that a straightforward dick pic cannot.

Emojis have the added effect of making us more vagina-positive as well. While the popularity of the eggplant over the banana as a stand-in for the phallus has been well documented, the emoji options for vaginal representation are vaster and much more creatively thrilling. There's the shell; the lush pink hibiscus flower (much sexier than the pale purple option to its right); the kitty; and — most directly and powerfully — the suggestive down-pointing finger.

The ability for emoji to become code — particularly for a topic that has, for centuries, been associated with shame — can open up lines of communication for couples in ways that words and photos cannot. Our culture has yet to adopt a totally positive attitude toward sex. But who is to say that our finger-shell-wave sequences won't shift us into a more celebratory, more revelatory sex culture? If emoji can help us communicate with our partners about our actions and preferences, then may the emoji live on in our keyboards forever.

"I think it's great when people can establish their own pet names or code names around sex," Kerner said. "The idea of getting a funny, sexy emoji from a partner applies some creativity and effort in a way that some sexting does not."

"It was like a sexy little code language we had between us."

For some, there's a hard line between the wink-wink-nudge-nudge sort of sexting where emojis have their place, and the more serious sext sessions where they do not. "I have definitely used the [eggplant] [water droplets]  in sexts, but I never use emojis when I'm seriously sexting," said Eve, 22. "There is no tenderness in sexual emojis."

But for those who find the sheer act of sexting a little odd, emojis can lighten the mood. "I've used emojis before in the midst of a sexting convo as a joke to ease the embarrassment of how weird sexting is," said Derek, 24. "I can't see past the ridiculousness of trying to get off from iPhone messages, so I think using emojis in the conversation kinda makes the experience as a whole feel more self-aware."

His preferred masturbatory emoji? "The classic [closed fist] [eggplant] combination," with a series of 10 water droplets "in close second."

*First names have been used to allow sources to speak freely about private matters.