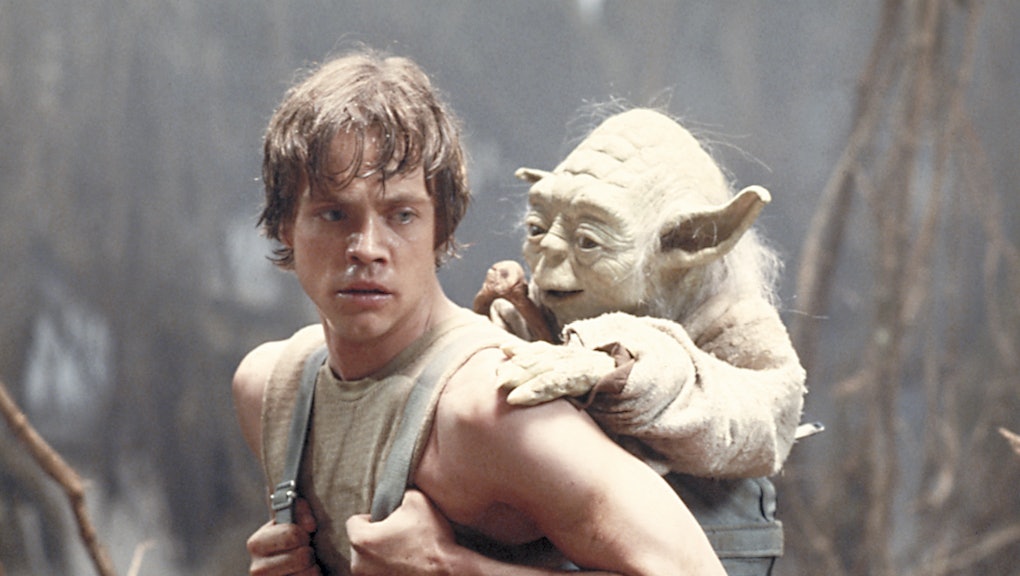 'Star Wars' Recap of Episodes 1-6: Highlights From Every Movie so Far

With the premiere of the newest addition to the Star Wars franchise only hours away, it might be helpful to take a chronological look back at the epic series' last six movies and everything that's happened in a galaxy far, far away.

Star Wars Episode I: The Phantom Menace served as the series 'official beginning and a prequel to the original three films. It begins with Obi-Wan Kenobi, a young Jedi in training, and his master, Qui-Gon Jinn, rescuing Queen Amidala (and the questionable Jar Jar Binks) from a Sith attack on Amidala's home planet, Naboo.

The whole crew winds up on Tatooine, where they meet young Anakin Skywalker, an untrained slave with superb sensitivity to the Force. After putting events in motion that free Skywalker from slavery, Qui-Gon and Obi-Wan take him to train as a Jedi. After returning to Naboo, Qui-Gon dies in a fight with Sith apprentice Darth Maul. Basically, they win Naboo back from the Sith, a Senator Palpatine is elected chancellor of the Galactic Republic, and Obi-Wan decides to defy the Jedi Council and train Anakin.

Ten years after the events of Episode I, Star Wars Episode II: Attack of the Clones picks up with the story of Anakin Skywalker, now a sassy Jedi apprentice with a tiny side-braid, assigned to protect the former queen of Naboo, Sen. Padmé Amidala. Bad things are happening in the galaxy, with a secret army of clones (all based on one man, Jango Fett) built by Palpatine to defend the Republic from a large droid army assembled by Count Dooku and the Trade Federation.

Anakin and Padmé fall in love while they're trying to rescue Obi Wan, Anakin gets his arm cut off in a battle with Sith Lord Dooku (who winds up fleeing from a spry Yoda). With a robotic prosthetic in place, Anakin and Padmé get married during the film's conclusion.

Hold on to your hats everybody, because young Anakin is about to go full Darth Vader. Star Wars Episode III: Revenge of the Sith begins with Anakin and his mentor, Obi-Wan, saving Chancellor Palpatine from Dooku. Meanwhile, Padmé announces her pregnancy (with twins!) but Anakin keeps having scary premonitions about her untimely death.

Palpatine, who has led the Galactic Republic in the years since Episode I, attempts to seduce Anakin over to the Dark Side by promising the ability to cheat death, leading Anakin to realize that Palpatine is actually a Sith lord. Anakin tells the Jedi Council what he knows, leading Jedi Master Mace Windu to a lightsaber-filled confrontation with Palpatine — until Anakin interferes, saving Palpatine and transitioning to the Dark Side. Once they're officially on the same team, Palpatine gives Anakin a snazzy new title: Darth Vader.

In a very upsetting scene, Anakin aka Darth Vader slaughters a bunch of Jedi and future Jedi, including children. Darth Vader and his heavily pregnant wife, Padmé, then have a confrontation where he winds up knocking her out. He and former mentor Obi-Wan fight near some lava, and Obi-Wan thinks that he's killed Vader by cutting off his legs and letting him burn up. However, Vader actually survives and gets a cool robotic suit, which he initially uses to watch the now-Emperor Palpatine direct construction of the first Death Star. Padmé later dies after giving birth to twins Luke and Leia Skywalker, who are split up and sent to grow up far away from each other for their own safety.

This is the film that started the whole thing. Star Wars Episode IV: A New Hope begins when young Luke Skywalker is only 19 years old, living on Tatooine with his aunt and uncle. The galaxy is divided into two factions: The Empire (evil) and the Rebel Alliance (good). Princess Leia is a Rebel leader trying to take down the Empire with stolen designs for the Death Star, a powerful spaceship that the Empire uses to destroy whole planets at once.

Leia is captured by an Imperial ship, but she hides the plans for the Death Star in a droid, R2-D2, who winds up on Tatooine with C-3PO and Luke. He accidentally hears the message that Leia hid inside R2-D2 and goes off to track down Obi-Wan Kenobi, now living on the planet under an assumed name. Obi-Wan tells Luke all about the Jedi and the Force, but lies about Luke's father, instead telling him he was killed by the rogue Jedi Darth Vader.

Luke winds up joining the Rebel fight and travels with Obi-Wan. After joining up with Han Solo and Chewbacca, they wind up rescuing Leia from the Death Star. Obi-Wan dies in a duel with Vader, Luke becomes a Rebel pilot, and he uses the Force to exploit a small weakness and destroy the Death Star.

At the start of Star Wars Episode V: The Empire Strikes Back, Rebel forces, including Princess Leia, Han Solo and Luke Skywalker, have relocated to the ice planet Hoth, but Imperial forces track them down and attack. Han and Leia escape in Han's ship while Luke heads off to Dagobah, a rather swampy planet — basically because the ghost of Obi-Wan told him to.

Luke trains to be a Jedi in Dagobah with the help of an elderly Jedi Master Yoda, where he learns how to control his power. Meanwhile, Darth Vader sends bounty-hunter Boba Fett (son of Jango Fett) to track down Han Solo and Leia. They wind up captured by Darth Vader and Han Solo is frozen in a big 'ol block of carbonite. Luke shows up at Cloud City to try and save his friends and winds up in a trap set by Vader. They duel, and Vader cuts Luke's hand off. Luke tells Vader he doesn't want to join him, and Vader tells Luke that he's his father.

Predictably, Luke is very upset to hear that, so he escapes through an air shaft. Thanks to their telepathic connection, he's saved by a now-free Leia and they ride off with plans to rescue Han.

Star Wars Episode VI: Return of the Jedi begins as Luke and Leia launch a plan to rescue Han Solo from crime lord Jabba the Hutt. Leia saves Han, but she winds up getting captured (and is forced to wear a metal bikini). Han and Luke are also in trouble, and are almost fed to the carnivorous Sarlacc before escaping with R2-D2's help.

Leia kills Jabba and meets up with Han and Luke — but Luke splits off from the group and returns to Dagobah, where he finds his old teacher Yoda near death. Yoda tells Luke that Darth Vader, his father, was once a Jedi named Anakin Skywalker — and that Leia is his twin sister (also thanks to the ghostly Obi-Wan).

Meanwhile, the Imperial forces are working on a new, scarier Death Star. Luke finds Leia and tells her their whole family story and the two turn themselves in to so they can confront Darth Vader (aka Dad) in person. Luke and Vader wind up together with Emperor Palpatine while Rebels battle Imperial forces.

Palpatine tries to kill Luke in front of Vader, but in a twist, Darth Vader refuses to let his son die and sacrifices himself instead. The emperor dies but so does Darth Vader, the Rebels take down the new Death Star and everyone is basically happy ever after ... maybe.