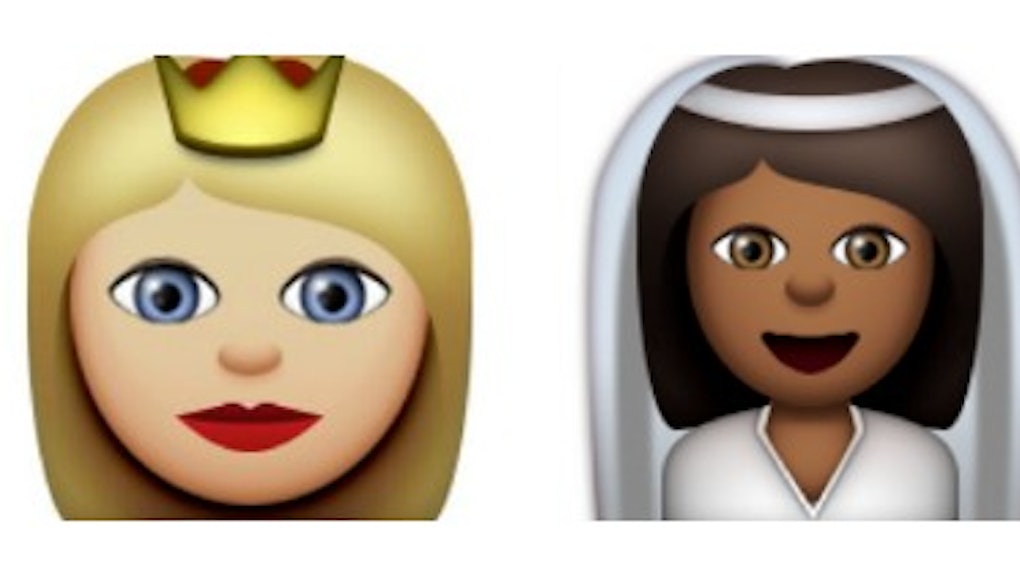 Hey, Unicode, It's About Damn Time We Had Some Emojis for Professional Women

This year, Oxford Dictionaries got creative with its Word of the Year. Instead of picking an actual word, it chose a familiar little yellow face. Upturned mouth, tears of joy streaming down its cheeks, eyebrows tilted in laughter: an emoji, precisely the one you'd add to a retweet of something that was so funny you cried. The decision was yet another example of how commonplace the small digital characters created by Unicode have become in daily life.

According to Oxford Dictionaries, use of the word emoji more than tripled between 2014 and 2015. Their ubiquity is undeniable. They're popular with grandparents and teenagers, in Bangkok and Bel Air. There are pages and pages of them on smartphones, enough to suit a broad range of everyday texting situations. Yet despite their abundance, there's an area of life that isn't properly represented.

Where the hell, we ask, are all the emojis for professional women?

What options exist? As it stands, women who want to use something other than a neutral female emoji have the following options to choose from: a princess, a bride, twins that resemble Playboy bunnies, a dancer in a red dress and a series of "information desk person" characters.

Male emojis, on the other hand, have the following non-neutral forms: Santa Claus, a man wearing a turban, a man wearing a gua pi mao (a type of hat), a policeman, a guardsman, a male detective, a male construction worker and a male angel. There's also a series of male athletes: a male horseback rider, a man bowing, a man walking, a man running, a man golfing, a man swimming and a man floating.

Ambiguously gendered figures with long hair and visible sideburns can be found playing basketball and surfing.

Besides the sheer difference in numbers, the occupations of these characters is telling. Men get the "serious" professional roles, and women get the "girlie" ones. Even the "information desk person" emojis have become better known for their seemingly sassy behavior: The woman holding out her hand, for instance, has been re-imagined as the hair-flip emoji.

"Every day we're seeing this subtle message that there are these emojis of men doing jobs, but women are just dancing and getting their hair cut," Niniane Wang, CEO of Evertoon and a former engineering manager at Google, told Mic. "It [has] an effect."

Before men's-rights types start screaming about political correctness gone haywire, no, this isn't the most pressing feminist issue of our time. We shouldn't necessarily throw all other causes to the wind and spend their days and nights fighting for equal emoji representation. There are myriad problems for women around the globe – violence, sexual assault, pay inequality and access to reproductive services, to name a few — that are far more threatening to women's lives.

The lack of emoji options for the working woman is worth examining because it's a small yet clear example of a social scheme that still manages to reinforce traditional gender stereotypes at every turn — even when the issue is as seemingly innocuous as a tiny digital face.

"I think it's a symptom of a detrimental system — the patriarchy — that reinforces stereotypes (the bride, the princess, the dancer) that don't represent the many layers of what it means to identify as female," Kendall Mackey, 28, told Mic.

Wang first noticed the lack of professional women emojis while developing Evertoon, an app that allows users to create avatars. "Emojis are a huge part of our product, and I've spent many hours of the last year of my professional life staring at [them]," she said.

Kelly Byrd, 29, theorized that the lack of emoji ladies in professional roles comes from a fear of representing women badly.

"They didn't want them to come across as being totally stereotypical," Byrd told Mic. If Unicode had chosen traditionally female-dominated — and thus easily identifiable — jobs, like nurses, teachers or secretaries, the backlash likely would have been powerful. Wang agreed, noting that it was possible Unicode didn't want to do "the wrong thing."

Still, both said they were dissatisfied with the emoji universe's inadequacies.

"I'm definitely disappointed that there's a big discrepancy," Byrd said. Though she said she won't be beating down the door of her local congressperson over the issue anytime soon, she emphasized that it's still important to see herself represented properly.

"[Emojis have] become part of our cultural language," Wang said. "That's why I don't think it's silly. Lots of people communicate with emojis, and texting is such a pervasive part of how we communicate with each other. If we're all texting, and all using emojis, then doesn't it make sense that they should represent us?"

It doesn't have to be a giant shift right away. Unicode can't represent every single profession out there. But it should be aware, as Mackey put it, that there are different layers to what it means to be female — and that means acknowledging that women make up roughly 40% of the global workforce.

They could start, for example, by adding female versions of the male professions, and vice versa. That means including female construction workers, grooms, male information desk people, and so on. (They could also stand to experiment with more genderless figures.)

Eventually, other occupations — businesswomen, doctors, housekeepers, scientists, singers, cooks — should have a place. (As well as some other key roles.) Wang said she'd like to see a female engineer or a female CEO.

It's not out of the realm of possibility. Though Unicode can seem like an impenetrable and distant fortress from the outside, recent updates to the emoji catalog have proven that change certainly isn't out of the question. Although BuzzFeed's Charlie Warzel describes Unicode as "a deeply technical and somewhat secretive organization." (Unicode has not responded to a request for comment for this story.)

Racially diverse emoji finally made their way into Unicode's updates in 2015, and on Friday, a Kickstarter campaign to add a dumpling emoji surpassed its goal. Jennifer Lee, the co-creator of the campaign, previously told Mic that beyond getting the dumpling emoji approved, she wanted to use the Kickstarter funds to help diversify Unicode's voting bodies and make the proposal process more inclusive to the public.

The organizing body she intends to use to see this goal through, Emojination, will help tackle problems like the lack of professional women emoji, and it will start by adding to the ranks of people who participate in the process in the first place. Emojination is a "nonvoting associate member" of Unicode.

Engineers, for example, make a good portion of the membership, which Lee believes needs to change. "The skill set of engineering is not robust enough to address the demands the emoji world is putting on the system," she told Mic earlier this week. "You need someone, ideally, who understands how to plug in to systems to gauge desire. The emoji subcommittee itself would benefit from a richer range of skill sets."

Then again, there's a much simpler solution to all of this. As Mackey put it, "Can't we just have an emoji that's of a woman smashing patriarchy?"