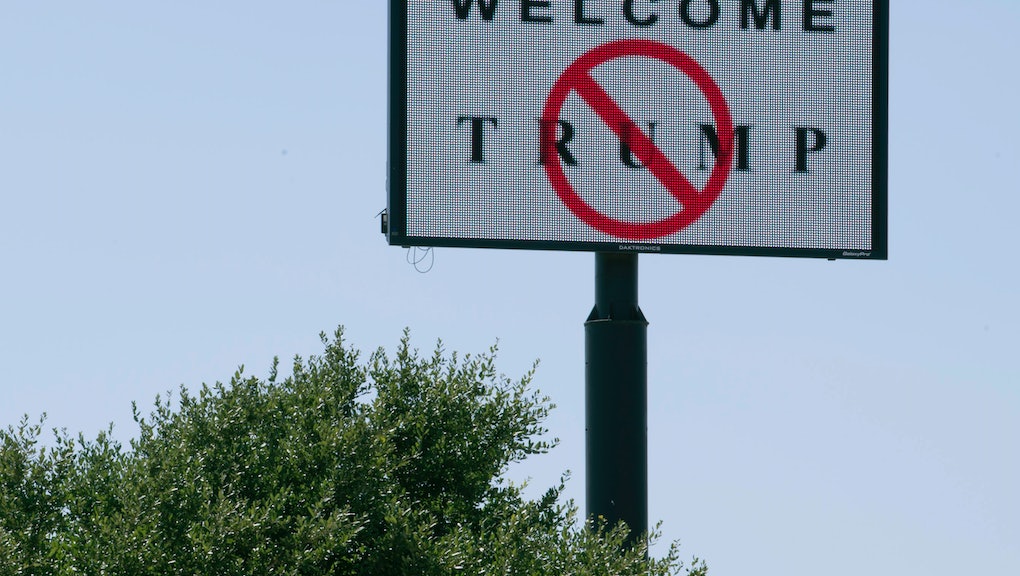 At least it's not an acronym.

Two New York legislators, Sen. Daniel Squadron and Assemblyman Charles Lavine, have brought the "Anything but Trump Act" to the table in an attempt change the name of the Donald J. Trump State Park, which straddles the New York City suburban counties of Putnam and Westchester.

The GOP presidential candidate donated the 436-acre plot of land in 2006, after his plans to convert it into a golf course went awry, but a lack of state funds resulted in the park being closed and abandoned in 2010. Still, it remains a thorn in the sides of Squadron and Lavine, and now even more so given the GOP presidential candidate's inflammatory statements on the campaign trail.

"When demagogues spew hate, it is our national and state responsibility to act because history has taught the painful lesson that inaction enables the merchants of ignorance and hate," Lavine wrote in an open letter to New York Gov. Andrew Cuomo, asking him to rename the park.

In the letter, Lavine suggests instead naming the park after Peter Salem, a freed slave and Revolutionary War hero who is believed by many to have converted to Islam.

"The rhetoric and discriminatory proposals we've seen from Mr. Trump don't belong in the presidential election, and don't belong in New York State Parks," Squadron also said in a statement, according to the New York Daily News. "He has dishonored the state, and should not be honored with a state park named for him."

"Mr. Trump is the front-runner for president of the United States of the Republican Party," Hope Hicks, Trump's 26-year-old spokeswoman, said in response, the Associated Press reports. "He is a proud resident of New York who employs thousands of people. The state cannot remove his name."

And it's not just lawmakers who are challenging Hicks' assertion. Six months ago, a concerned citizen, Andrew Cheung, started a Change.org petition entitled, "Rename the Donald J. Trump State Park to...anything else."

"Donald Trump's behavior and public statements have been a source of embarrassment for this great nation," reads the petition. "He has shown himself to be a bigot, and it is embarrassing that the state of New York has a park named after him ... He is unworthy to be part of this state's history and identity."

This latest proposal by Squadron and Lavine comes amidst yet another week of controversy for the presidential candidate who, during the GOP primary debate on Tuesday, made the case for killing the families of ISIS members.

His divisive stance has produced vocal opponents and supporters.

On Wednesday night, filmmaker Michael Moore stood outside the Trump Tower in New York City holding a sign, which read, "We are all Muslim." He posted it to Facebook alongside a scathing open letter to the candidate.

Nobel Peace Prize laureate Malala Yousafzai also had a response for Trump, specifically to his Dec. 7 threat to impose a "total and complete shutdown of Muslims entering the United States."

"The more you speak about Islam and against all Muslims, the more terrorists we create," Yousafzai, speaking to Channel 4 News, said on Tuesday.

"If your intention is to stop terrorism, do not try to blame the whole population of Muslims for it because it cannot stop terrorism," she added. "It will radicalize more terrorists."

Still, Trump's outlandish campaign flare has earned him some fans in high places. During Vladimir Putin's end of year address on Thursday, the Russian president called Trump a "bright and talented person."

Putin added he "welcomes" the idea of a Trump presidency as he "would probably get along with [Trump] very well." Trump embraced Putin's remarks, calling them a "great honor."

So, at least there's a backup plan. If Trump gets this state park taken away from him, Putin can always give him a plot in Siberia.