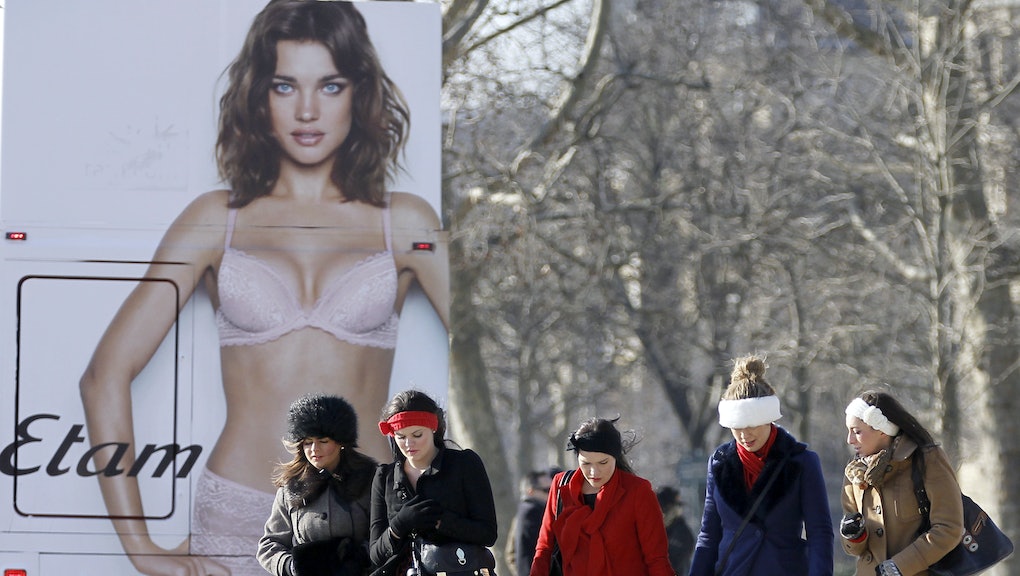 On Thursday, deputies in France's National Assembly, the country's lower house of Parliament, passed a bill that will drastically affect how we look at advertisements and photo shoots from the country.

The new law stipulates that images of models that have been digitally altered — to appear thinner, larger or augmented in any way — must clearly indicate in text that the photograph has been "touched up" or "retouched," according to Women's Wear Daily.

The hallmark legislation also includes a rule governing models' health. All models applying for jobs within France must turn in a medical certification — aka a doctor's note — proving their overall health is good, "assessed in particular in terms of body mass index, is compatible with the practice of the (modeling) profession," according to Agence France-Presse.

An earlier draft of the bill from April had included a stipulation that models must be at a certain BMI (body mass index) to be employed, but that idea was rejected. Instead, lawmakers decided to let doctors make the call, taking a model's age, gender and body shape into consideration.

Employers who do not abide by the new doctor's note rule can face up to six months of imprisonment and a fine of 75,000 euros.

But the one that should really affect consumers is the Photoshop rule, one that France has been weighing for six years.

The newly-passed law comes after years of backlash against digital retouching. We've become inured to the effects of Photoshopping — when the un-retouched versions of Khloe Kardashian's Complex photos came out, no one was all that surprised they'd been altered — and yet we still realize how damaging and wrong it can be. In October, Zendaya took to Instagram to show a before-and-after from her Modeliste magazine photo shoot, decrying the fact that her hips and waist were slimmed down significantly.

Now , under the new law in France, images like Zendaya's would run with a label, allowing the viewer to consciously take note that what they see isn't reality. That's hugely important for a country in which an estimated 30,000 to 40,000 people — 90% of whom are women — suffer from anorexia nervosa.

Photoshop may not directly cause eating disorders, but it has been shown to influence viewers' body image. In 2011, the American Medical Association condemned retouching, saying in a statement, "A large body of literature links exposure to media-propagated images of unrealistic body image to eating disorders and other child and adolescent health problems."

Clearly, what we see and perceive as attainable matters, all the way from advertisements and magazine photo shoots to the runways themselves. The United States has seen just a few efforts from advertisers to do away with photo editing entirely, such as Aerie's successful ad campaigns sans Photoshop this year.

But there have been few crackdowns in the U.S. on ads that do use excessive airbrushing, save for the occasional public backlash and celebrity call outs to hold companies accountable.

Currently, the United Kingdom has watchdog group the Advertising Standards Authority to ban ads that go overboard, and the government is trying to set its own standards for the modeling industry, including a minimum BMI for models. According to Women's Wear Daily, Israel passed a law banning underweight models way back in 2012, and both Italy and Spain have adopted measures to send extremely thin models home.

Clearly, the French fashion industry is slowly moving into a healthier direction. Now only time will tell if the United States will do the same.