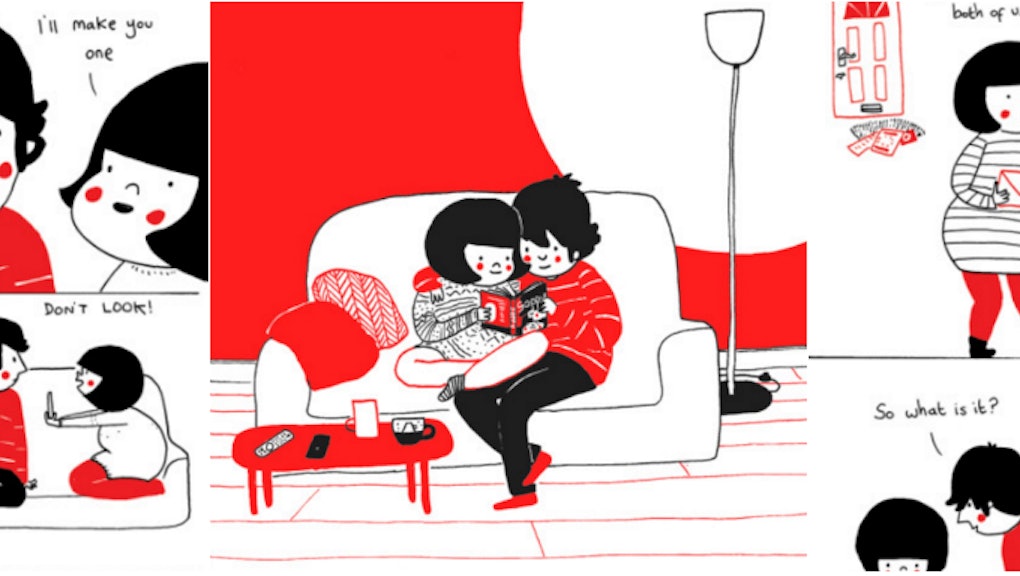 British artist Philippa Rice isn't interested in depicting love as particularly glamorous or even attractive. Instead, she's interested in illustrating the banal, everyday moments that most long-term couples will be able to relate to, from arguing over who gets to sleep on which side of the bed to hitting an impasse during nightly "what's for dinner?" debates.

Rice has documented these little mundane moments on her popular Tumblr, as well as a book of comics that she published in 2014:

"True love isn't always about the big romantic gestures," Rice writes on the back cover of her book. "Sometimes it's about sympathizing with someone whose tea has gone cold or reading together and sharing a quilt. When two people move in together, it soon becomes apparent that the little things mean an awful lot. The throwaway moments in life become meaningful when you spend them in the company of someone you love."

(Mic has reached out to Rice for further comment and will update if we hear back.)

The book and comic series is called Soppy, which Rice explained to the Huffington Post earlier this week is British slang for a feeling "somewhere between schmaltzy, sentimental, sappy and silly... I was told that it's not a word people use in the U.S. and that surprised me!"

Even if you don't use the word, the images certainly conjure the feeling on their own by highlighting those lil' understated moments of human connection and bonding that form when you live with someone.

In an interview with the Telegraph last year, Rice said that the comics are largely based on her IRL life with her husband Luke.

"I didn't want to make anything up, because I didn't want Luke to read it and think, 'Well, that's not true.' I wanted Luke to like it, more than anything," she told the site. "But a lot of people have been saying, 'This is what I do. You're watching me. You're a clone of me!' It makes you feel that lots of people are just the same. I guess we're all normal."

Indeed, what could be more normal than the following scene, in which Luke is doing the dishes when Philippa approaches him with body language that seems to say, "Heeyy, got one more for ya, thaaaanks, love ya babe!"

Check out more of Philippa Rice's work below and over at her website and Tumblr.