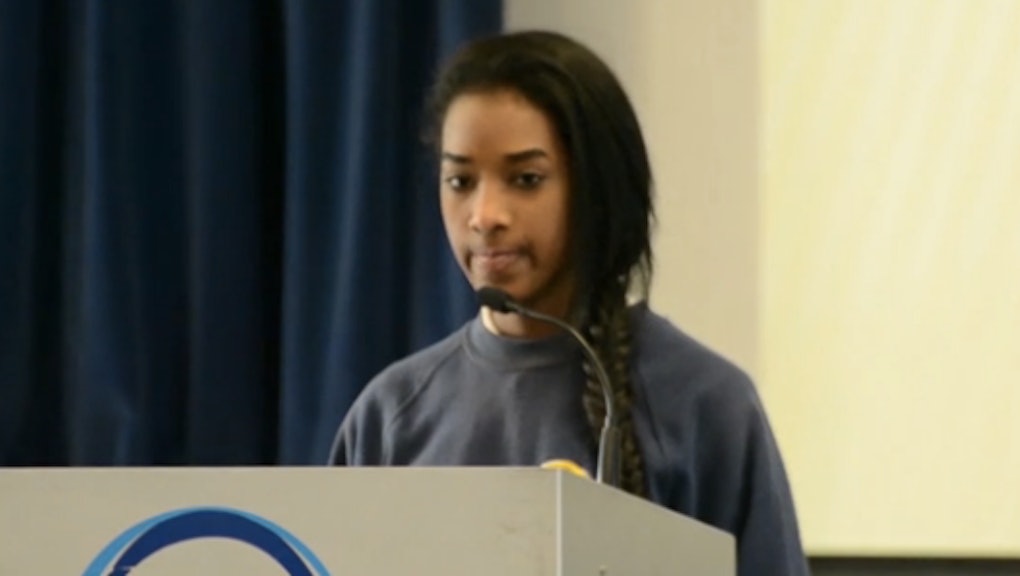 As Islamophobia hits a fever pitch globally, Muslims have been going blue in the face reminding people that they're not all terrorists. So many have said enough is enough, but 15-year-old Isra Mohammed, a Muslim student at Kenton School in Newcastle, England, delivered a speech that has struck a chord with viewers everywhere.

In the video, Mohammed lays out stereotypes surrounding Islam in a Powerpoint presentation she delivers to over 2,000 students and staff. "So what is Islam, and what do we actually believe in?" asks Mohammed. "It's a beautiful religion like many others. It's a religion of peace and mercy." Mohammed outlined the way the media distorts this message, sharing recent headlines from British tabloids, one claiming "1 in 5 Brit Muslims' sympathy for jihadis."

She says, "I want you to know these headlines are actually false. ... And this upsets me because the people behind them are usually ISIS." The Islamophobia the media propagates, and the Islamophobia people spread via social media, Mohammed points out, is actually what's fueling the terrorist organization: "If you are someone with a Facebook account, an Instagram account, a Twitter account ... and you are throwing out masses of hate: You are helping ISIS. You are supporting ISIS. This is what they want. So think about it."

Mohammed was inspired to make her speech when children were bullying her younger brother and sister for their faith. Her 7-year-old sister came home from school crying, asking why her classmates were blaming her for the Paris attacks, and her brother asked her why people were telling him his religion was killing people. Mohammed says she's had similar experiences.

"I had people coming up to me in school, this week and last week, telling me that because I'm Muslim I'm a terrorist," she says. "And this is something I go through every day of my life." It only gets worse, Mohammed explains, listing off some of the recent hate crimes perpetrated against Muslims.

"Terrorism has no religion, and terrorism is not the face of Islam," she said. "My name is Isra Mohammed. I am Muslim, and I am not a terrorist."