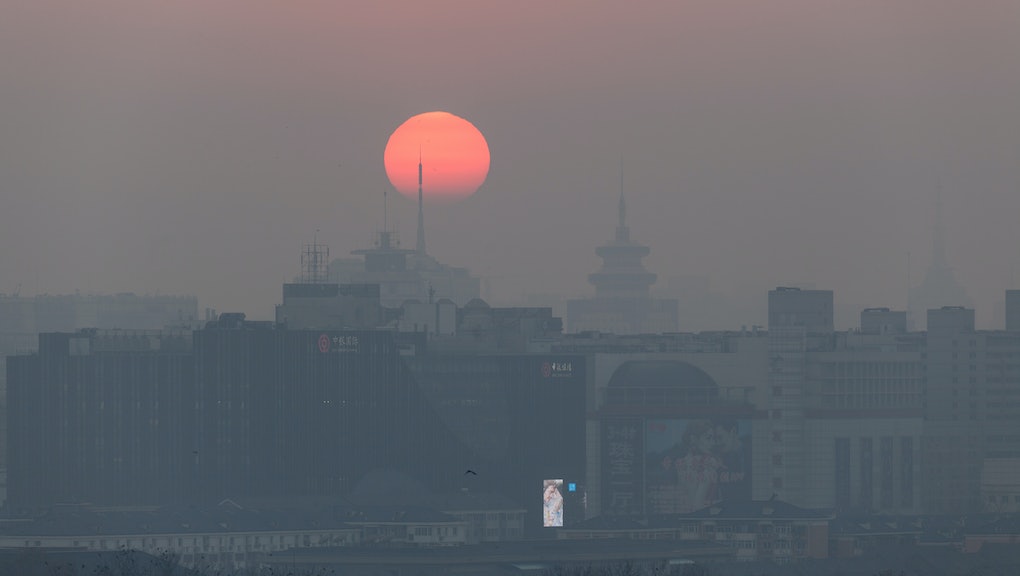 With air pollution in China reaching unprecedented levels, one company has found a novel solution for the country's breathless 1.36 billion citizens — bottled air.

Canadian startup Vitality Air, which cans and exports high quality air from the mountains of Alberta, Canada, is struggling to keep up with demand in China. A sample shipment of 500 bottles sold out in China in under two weeks, according to company co-founder Moses Lam.

The whole idea began when Lam and a business partner posted a Ziploc bag of air on eBay. It sold for 99 cents. Undeterred, they tried the stunt again and sold another bag to a buyer in the United States for $168 — business model solidified.

"We wanted to do something fun, something that would help people as well — something disruptive," Lam told Mic. "So we said, 'Hey let's try and sell air and see what happens.'"

What happened has been explosive, after selling out their initial batch, the company immediately went to work to fulfill the demand. Harrison Wang, the company's director of China operations, told CNN that pre-orders for the canned air were skyrocketing. "Now we're taking lots of pre orders for our upcoming shipment. We're getting close to the 1,000 mark," Wang said, adding that the company was planning shipments to India and Dubai, in the United Arab Emirates.

If this all sounds familiar, it might be because it bears more than a passing resemblance to a major plot theme in Mel Brooks' 1987 cult classic Spaceballs. Lam insists, though, that his idea has nothing to do with Brooks' "Perri-Air."

While China has long been known for its less-than-pristine air, sales have likely been buffeted by historic pollution levels that have plagued the country in recent weeks. In December alone, China issued two pollution red alerts, the highest classification. Until this month, red alerts had never been issued since a new pollution monitoring system was introduced two years ago. The U.S. embassy in Beijing has, however, routinely measured off-the-chart toxic Chinese air for years, once publicly labeling it "crazy bad."

At least one Beijing resident, though, greeted the idea with more than a little skepticism. A.J Song, an entrepreneur, said the idea was only a fad and that neither he nor any of his friends had any intention of buying the stuff.

"I just don't think it's something I need," Song told Mic. "I have an air purifier at home, and I don't think bottled air works outside. ... I asked my friends and they all said they won't buy it."

Indeed, as an alternative to canned air, purifiers have proliferated in recent years as a more scientifically accepted way to breathe clean air. Going beyond the fad stage, Lam, too, gave Mic more than a little indication that his company might not be in it for the long haul.

"We started this company as a fun company. And we want to keep it that way," he said. "We really have no plans, no goals. We just want to see what happens."