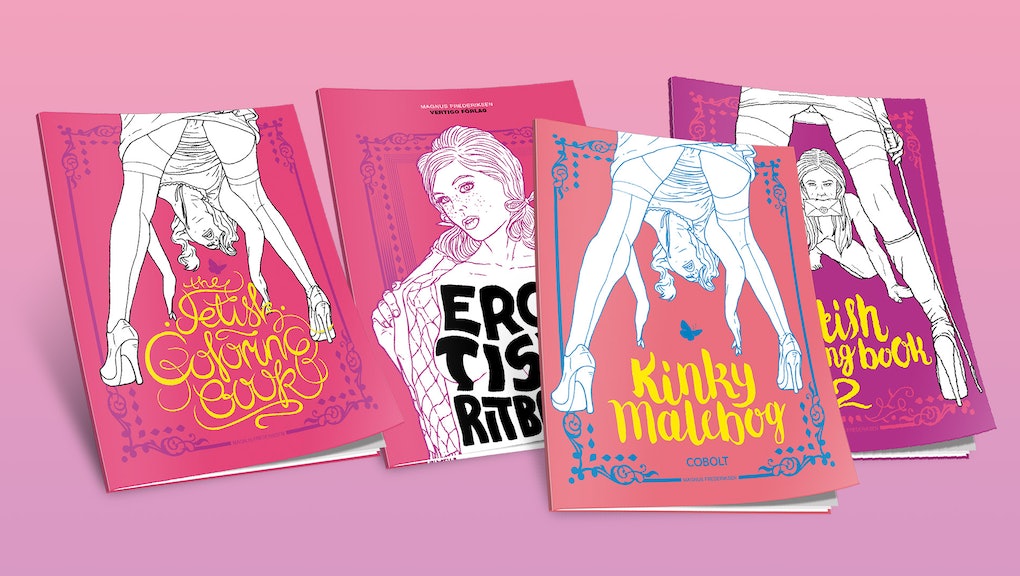 Meet the Man Who Makes Pornographic Coloring Books for Grown-Ups

Adult coloring books are huge right now. Amazon has more than 9,000 items in its "Coloring Books for Grown-Ups" category, many of them with hundreds (if not thousands) of enthusiastic reviews. Billed largely as way for overgrown children to relieve stress, it's a well-documented trend that adults are using crayons and markers to shade and ink between the lines of enchanted forests, ocean animals and simple "stress relieving patterns".

Stockholm-based illustrator and designer Magnus Frederiksen, 36, is an adult coloring book artist who hit the jackpot with his Fetish Coloring Book. Originally published in November 2014, the book is racking up a slew of reviews on Amazon. Amongst the most "liked"? The succinct and powerful, "Got me laid."

The following images are NSFW.

Mic: What was the inspiration for the book?

Magnus Frederiksen: When I was in design school [at Forsbergs School in Sweden], I had a friend that didn't like to look at nude people, which was a problem, because we had nude figure-drawing on the schedule. So I went home and did some drawings for her to color. It was meant to be as a little joke and as a way to try to make her more confident [about] nudity. In the process I thought it was kind of lame to just make [a] nude illustration that didn't do anything, so I spiced them up a bit.

She laughed. Everyone laughed, and it made me think that it could be a book.

The feedback for the book online appears to be super positive! Has that been the case in other situations?

MF: The response is mostly laughter. At fairs, we acknowledge that women are more curious about the book and are the natural target group. Men are too afraid of sex.

What do you mean when you say, "Men are too afraid of sex"?

MF: My experience is that men are, what I would call, afraid of sex as a definition; not just talking about it. [They are] more afraid to explore the world of sex. As a man, you should know how to have sex — strange and not true, I know, but that is a common feeling. So, when boys are about to explore sex, they are so scared of doing wrong, so they either pretend that they know what they do or they watch porn to learn how to do. Most important of all, they don't ask about it; they don't talk about it. So they do what they think is right.

When I meet couples at fairs, the man reacts at the book as if it's junk, a threat, something they never have been thinking about. They have no control of this. The woman reacts with laughter and points at stuff and says stuff like, "Look, what a cock," or "Think if you and me... hahaha!" So many times I have had looks from the man that say, "You make me sick, asshole. Look what I have to deal with now."

Do you think people mainly buy it as a joke gift or do you think some people are into it? Like, as its own fetish?

MF: I would love if it was used as a foreplay or if it would develop into its own fetish... I need to think about that. I think most buyers are giving it away as a gift. It's a perfect gift. Think of all the topics you could talk about during a dinner after you [have] just given away a bottle of wine and a coloring book. What an ice breaker. And think what the Christmas family photo should look like after grandma just opened her present. Priceless.

Truly. What's your favorite fetish in the book?

MF: It's difficult to pick one. I have some favorite motifs though. The man with the chainsaw — it's my Swedish publisher [below, left]. He didn't know that I put him into the Swedish edition. I told him after I sent it to the printer.

I love that your book has equal amounts of drawings of men and women; was this on purpose?

MF: I think that sex includes both man and woman. Humans want to have sex; it's not a "man" thing. Having said that, I do think that gender isn't that important when it comes to sex. You fuck the one you want to fuck as long you both want it. And everything is OK as long as it doesn't hurt anyone [who] doesn't want to get hurt.

MF: I would like everyone to stop judging each other. We are all equal: man and woman, black and white, atheist and believer, straight and gay. If your son fucks his best friend that also happens to be a boy, it doesn't matter. 'Cause it's not your ass, and it's not your dick. Take care of your own sexuality, not anyone else's.