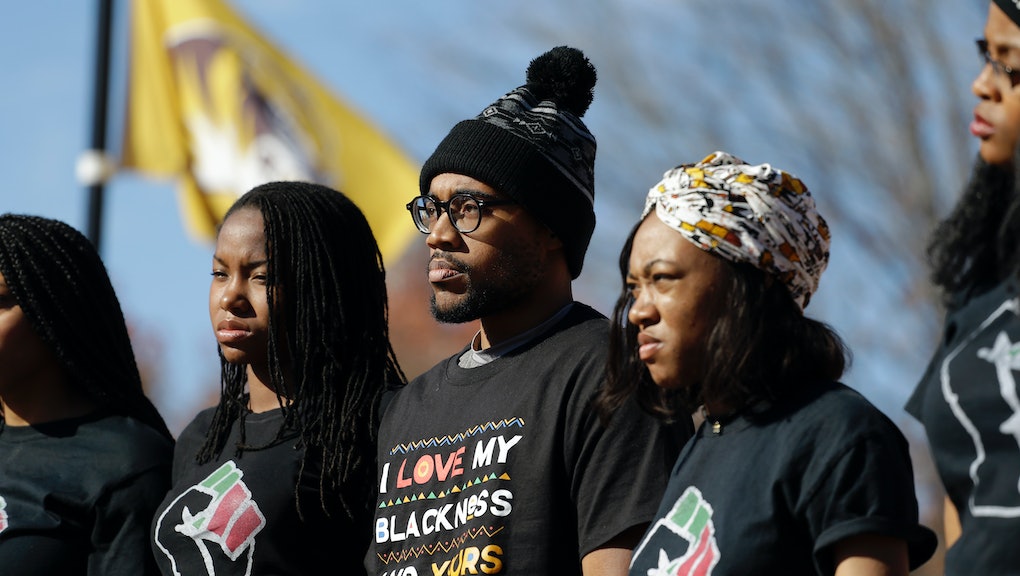 Emory University in Atlanta, Georgia, is considering banning Yik Yak. The anonymous mobile messaging app — whose headquarters lie just up Interstate 85 in Atlanta's Buckhead neighborhood — has been a site of conflict due to racist posts shared at colleges across the U.S. lately.

In a list of demands written by organizers and sent to administrators in December, black student leaders at Emory called for a virtual "geofence" around the zip code that encompasses the school's main campus, which would effectively block Yik Yak from being used there.

It's a severe move, but would it be enough? Or is the problem bigger than a handful of college students spewing vitriol on the internet?

Yik Yak has been a heated topic of debate for black students since before Sariyah Benoit can remember. The 19-year-old sophomore and Bronx native is affiliated with multiple groups at Emory, including the Black Student Alliance.

"Black students have always hated Yik Yak," Benoit told Mic. "Colleges are just microcosms of America ... and all people have a capacity for evil. If you have an anonymous platform, it just breeds that."

Increasingly since it launched, Yik Yak — which allows users to post anonymously — has been used to share racist, misogynistic, and at times, threatening messages, which are then read by users and campus authorities who can do little to fight them.

"The anonymity [Yik Yak] provides allows people to express [such] messages without risking a variety of sanctions that could result, from public shaming, to the loss of employment" and more, Charlton McIlwain, an associate professor at New York University, told Mic.

That is, unless circumstances arise that require legal action. The Yik Yak debate gained traction at Emory in October when a student at the school's Oxford campus was arrested for allegedly using the app to threaten a mass shooting.

But such instances are rare — and unless Yik Yak's administrators agree the case is an emergency, information about users is only given to law enforcement if a subpoena, court order or search warrant is presented.

As a result, Benoit says, Emory officials have been less responsive to students' Yik Yak-related concerns have than they could be. "[Black students have] been pushing this [ban] for a long time," Benoit said. "[The school] only responded this time because we made the school look bad with our demands."

This disconnect has facilitated what many call a hostile environment for students of color. And Benoit's criticism mirrors that of students and administrators across the country. At least one other college — the University of San Diego — has received student demands for a Yik Yak ban in recent months, while the app has already been barred from school networks at colleges in New York and Vermont in the past year and a half. Other schools have seen protests around racist "yaks" posted in their vicinity, most recently at Lewis & Clark College in Portland, Oregon.

It's an ongoing discussion, but Emory sent Mic a statement saying it "currently does not have a position regarding Yik Yak," adding, "[the] university's responses to the [black students'] demands are and will continue to be a collaborative process that actively engages leadership and organizations in Campus Life, Academic Affairs and other areas within the Emory community."

"Racism is ingrained in America. No matter what platform comes up, it's going to make its way on." — Sariyah Benoit

Indeed, Yik Yak doesn't exactly avail itself to easy answers. Originally conceived as a more democratic social media platform than some of its contemporaries — where the number of friends and followers a user has dictates how widely their posts are read — the app lets users share messages that can be seen by anyone within a 1.5- to 10-mile radius.

Users' identities are protected by the company — a fact that has made Yik Yak hard to regulate on the more than 2,000 college campuses where it is used. "How do we hold anybody accountable [for racism or threats] when Yik Yak's whole premise is to protect its users' anonymity?" Alane Varga, the Dean of Diversity and Student Development at Utica College in Utica, New York, told Mic.

Utica College is one of the handful of schools to ban Yik Yak from its campus internet networks. It did so in November 2014 and hasn't looked back since. Some say this move is more symbolic than effective — Yik Yak can still be accessed via other networks, after all — but Varga says it was important to proactively address student concerns and safety.

"It was not an easy decision, nor did it come to us quickly," she said. "It came from a recognition of the harm that was being done to individuals in our community ... I think it was the right decision to make."

Other schools still struggle with the jurisdictional challenges of an app that defines itself by location — making it subject to the same rules that govern any other behavior at that location, theoretically — but that keeps its users anonymous.

Free speech concerns are always at the forefront of these discussions. But at the end of the day, it's a judgment call for admins. "Our responsibility is a safe environment for our students," a spokesperson for Norwich University in Northfield, Vermont — another school that blocked the app from its networks in 2014 — told Mic. "Our decision serves to exemplify and reinforce our position that hate speech is not tolerated at Norwich."

Today, Yik Yak finds itself once again on the front lines of campus safety discussions. In November, threats posted to the app led to the arrests of two white college students in Missouri, mere days after black student led-protests and a hunger strike by black graduate student Jonathan Butler sparked the ouster of ex-University of Missouri system president Tim Wolfe.

One of the threats read, "I'm going to shoot any black people tomorrow, so be ready." When asked for comment on this and similar incidents, Yik Yak directed Mic to a blog post written by the app's co-founder, Brooks Buffington, after the Mizzou arrests.

"Yik Yak is your community," Buffington wrote, "it's an extension of the real world directly around you ... Let's not waste any words here: This sort of behavior is NOT what Yik Yak is to be used for. Period. It is not condoned by Yik Yak, and it violates our Terms of Service."

In a year largely defined by black protest — against both white supremacist violence and, increasingly, marginalization of black students on college campuses — the "world directly around you" is not always a place people want, or need, to see extended. The debate finds Yik Yak straddling the line between being a platform that merely reflects its users, and a more insidious tool that cannot be detangled from its troubling applications.

Emory University is just the latest to find itself embroiled in this debate. But even Yik Yak's most vocal critics have trouble deciding what responsibility the company has to combat these abuses. "I feel like it's always going to happen," Benoit told Mic. "Racism is ingrained in America. No matter what platform comes up, it's going to make its way on.

"But all students have ever asked for is space," she said, "space to exist on campus without being attacked racially ... Especially since it's in Emory's mission statement, protecting the well-being of all students. It's the school's responsibility."