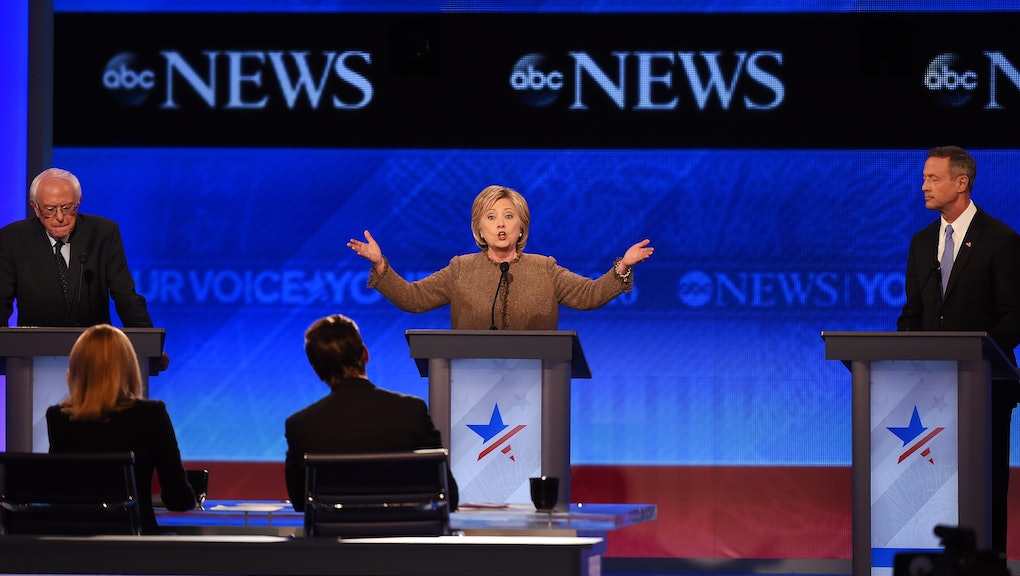 The third of six Democratic presidential debates — and the final debate of 2015 — kicked off in New Hampshire on Saturday night, in the midst of new poll numbers, strategy outline announcements and data breaching controversies.

Sanders, who was trailing behind the party's leading candidate Clinton by 31% according to the latest ABC News/Washington Post poll released Friday, reestablished his campaign's ability to access the Democratic database system NGP VAN (which contains the party's national voter records) hours before the debate aired at 8:30 p.m. Eastern, filing a federal lawsuit against the Democratic National Committee.

Clinton began the night with her opening remarks, discussing the threat of terrorism, her plans for economic growth and the importance of staying out of another war in the Middle East. O'Malley discussed the threat of the Islamic State group, saying, "the first job of the president of the United States is to protect the people of the United States."

Sanders concluded the opening remarks, mentioning the threat of ISIS but focusing on his usual strengths by discussing the need for economic growth, saying, "I'm running for president because I'm going to create an economy that works for working families, not just billionaires. I'm running for president because we have a campaign finance system which is corrupt, where billionaires are spending hundreds of millions of dollars to buy candidates who will represent their interest rather than the middle class and working families."

Sanders was then asked about the data breach and immediately decided to set the record straight: After explaining the Democratic National Committee accidentally sent information from Clinton's campaign to his, he said, "In this case, our staff did the wrong thing. They looked at that information. As soon as we learned that they looked at that information, we fired that person. We are now doing an independent internal investigation to see who else was involved."

Terrorism and gun control immediately became some of the biggest highlights of the night, with Sanders and Clinton agreeing on the need to create coalitions against the threat of terror. Clinton stressed the need to include Muslims in the discussion of dealing with home-grown radicalization, and suggested Trump's rhetoric surrounding Islam and calling for a ban on Muslims entering the nation "fans the flames" of terrorism.

The candidates were thrown into a heated battle on gun control after O'Malley injected himself into Clinton and Sanders' talking points by saying both haven't been strong enough on closing loopholes which allow easy access to guns across the nation.

Sanders fired back at O'Malley, saying, "Do not tell me that I have not shown courage in standing up to the gun people, in voting to ban assault weapons, voting for instant background checks, voting to end the gun show loophole and now in a position to create a consensus in America on gun safety.

When asked what she has to say to those supporting Trump's ban on Muslims in America, Clinton said he is "becoming ISIS' best recruiter." Clinton also said during the night she doesn't think a halt is necessary on refugees, though an increase in the security measures in place in the refugee vetting process should be made. "I do believe we have a history and a tradition," Clinton said, adding that she would prioritize admitting widows, orphans and those who "have no place else to go."

Sanders said he'd include Russia in a coalition against terrorism in the Middle East, adding countries like Saudi Arabia should be "stepping up" to add "Muslim troops" to the ground forces fighting the terror organizations ravaging the region. In order to prepare for new emerging threats throughout the world of terrorism, O'Malley added that America needs to be a leading force. The former Maryland governor said he would add the administrator of the United States Agency for International Development as a cabinet member if he were elected president.

O'Malley called out both Sanders and Clinton for their older ages, asking the moderators, "May I offer a different generation's perspective on this?" He then suggested it isn't America's responsibility to remove Syrian President Bashar Assad from office, and that we need to "leave the Cold War."

"I believe that we need to focus on destroying ISIL. That is the clear and present danger," O'Malley said. "I believe that we can springboard off of this new U.N. resolution and we should create, as Secretary Clinton indicated, and I agree with that, that there should be a political process. But we shouldn't be the ones declaring that Assad must go."

The debate then refocused on the economy, with Sanders helming the lead of the conversation. He focused on lowering the burden of paying for college education on students, as well as improving the quality of life and opportunities available to the middle class.

"Middle class in this country for the last 40 years has been disappearing, are we better off today than we were when Bush left office?" Sanders asked. "Absolutely. But, as you've indicated, for millions of American workers, people in New Hampshire, all over America, they're working longer hours for low wages, deeply worried about their kids. So what do we do? First statement we make is we tell the billionaire class they cannot have it all ... Next thing you do, pay equity for women workers. Women should not be making 79 cents on the dollar compared to men. Next thing that we do, real unemployment. Official unemployment 5%. Real unemployment 10%. Youth unemployment off the charts. We rebuild our crumbling infrastructure, our roads, our bridges, our rail system. We create 13 million jobs with a trillion-dollar investment."

Clinton had a standout moment when she stated, "I want to be the president for the struggling, the striving and the successful." She continued,  "I want to make sure the wealthy pay their fair share, which they have not been doing. I want the Buffett rule to be in effect where millionaires have to pay 30% tax rates instead of 10% to nothing in some cases. I want to make sure we rein in the excessive use of political power to feather the nest and support the super wealthy. But I also want to create jobs, and I want to be a partner with the private sector. I'm particularly keen on creating jobs in small business."

Health care was also brought up, as moderators noted rising health care costs when asking candidates what improvements need to be made to Obamacare. Clinton started by noting several improvements to Obama's Affordable Care Act, but added there need to be strengthened regulations against private insurance companies. Clinton said the reason some expenses have gone up is because governors in some areas did not agree on Medicaid extensions, which caused taxpayers to foot the the bill.

O'Malley focused on efforts he believes Clinton took from his policies regarding students loans and education, allowing Clinton to discuss what she calls the "New College Compact." According to the compact, students shouldn't have to pay loans to receive an education, and universities will be held accountable in improving their students' graduation and success outcomes, while controlling costs. Interest rates would also be cut, and every American would be qualified for a simplified income-based repayment plan where workers pay no more than 10% of their earnings.

One of the final topics of the night was one experts might not have predicted would have been given much attention: heroin. Clinton described hearing about the problems with rising addiction rates across the United States during the very beginning of her campaign, and Sanders agreed with the former secretary of state that doctors are prescribing opiates to too many Americans. O'Malley added he expanded drug treatment services each year he was in office in Maryland, and said the government needs to reign in the over-prescribing of drugs.

Instead of asking about climate change, the moderators decided to spin the questioning toward presidential spouses. Clinton said she likely would still be responsible for the flower arrangements in the White House but would come to her "first husband" for advice on things like growing the middle class and improving the economy.

Sanders noted Clinton transformed the role of the first lady in America, then talked about his wife's philanthropic work in Vermont. O'Malley joked his wife doesn't let his dreams of becoming president get in the way of her own dreams and is more of an accomplished lawyer than he tried to be before transitioning toward becoming a politician.

Here are excerpts from each of the candidates closing remarks:

"I think frankly, maybe I'm wrong, but on our worst day I think we have a lot more to offer the American people than the right-wing extremists today. My father came to this country from Poland at the age of 17 without a nickel in his pocket ... So I know something about economic anxiety and living in a family that does not have sufficient income. And that is why I am pledging if elected president of the United States to bring about a political revolution where millions of people begin to stand up and finally say enough is enough, this great country and our government belongs to all of us, not just a handful of billionaires. Thank you very much."

"Tonight what you listened to was a healthy exchange of ideas about how we'd do that which we have always proven, the capacity to do better than any nation in the world, to take actions that include more of our people more fully in the economic, social and political life of our country. When you listened to the Republican debate the other night, you heard a lot of anger and you had a lot of fear ... We build our country by adopting wage and labor policies including comprehensive immigration reform with a pathway of citizenship for all. We do it by investing in our country, by investing in infrastructure, by investing in the skills and the talents of our people with debt-free college, and we can do it again."

"I know how important it is that we have a Democrat succeed President Obama in the White House. And I will do all that I can in this campaign to reach out and explain what I stand for and what I will do as president. You know, I became a grandmother 15 months ago, and so I spend a lot of time thinking about my granddaughter's future. But as president I will spend even more time thinking about the futures of all the kids and the grandchildren in this country because I want to make sure every single child has a chance to live up to his or her God-given potential. If you will join me in this campaign, we will make that a mission. Thank you, good night and may the force be with you."