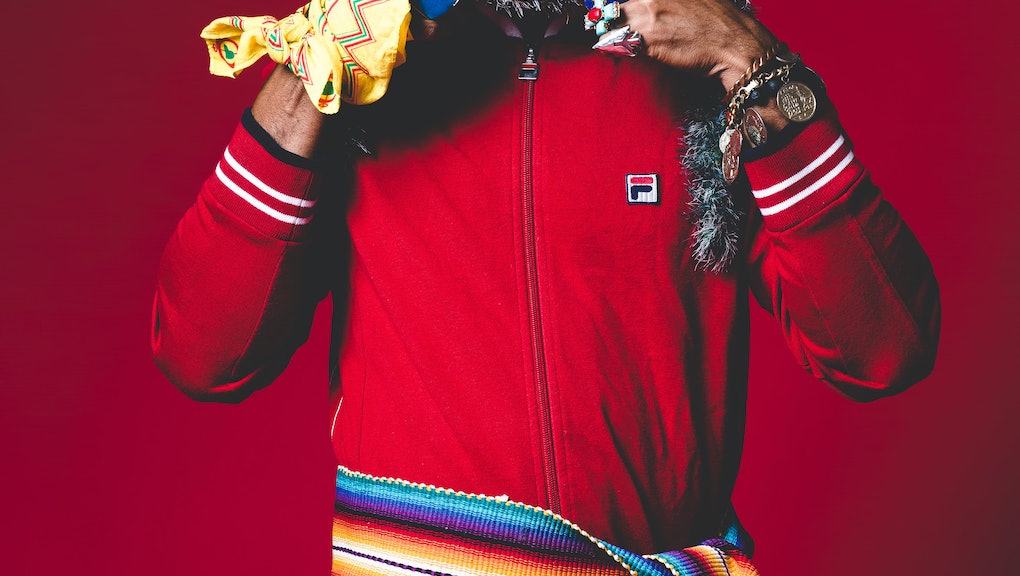 Caribbean sounds are trendy in electronic music these days. Jamie xx borrowed the flexible percussion and island patois to color his highly praised In Colour. Diplo has made wide use of the musical traditions for his work with Major Lazer, Jack Ü and Justin Bieber. Drake sported some Caribbean slang on his latest releases and creative partnerships.

It's hard to ignore the fact that most of the tracks getting the wide play are being arranged by white men — or at least artists who reside very far from the tropical archipelago. As hip as the fusion might be, few artists that actually grew up steeped in the Caribbean's sounds and colors have managed to find inroads to capitalize off this audience interest. However, some compelling voices are rising, and the Bermuda-born musical collective Noise Cans, led by the masked DJ Collas, is one of the hardest to ignore.

Noise Cans' latest single with Lady Bee, "Bucka," featuring Mr. Vegas, is currently No. 4 on Beatport's top hip-hop tracks. It offers a good introduction to the Noise Cans "sound system," as it describes itself SoundCloud — a distinctive marriage of EDM's dissonant drops with Caribbean lo-fi dub. But it's Noise Cans' live show where the act is really looking to distinguish itself from other EDM artists whose live acts don't stretch far beyond mere button pushing.

"I like to say it's like Carnival meets Cirque du Soleil, with a little bit of Blue Man Group," Collas told Mic, refusing to give his real name to preserve his anonymity. "I always joke that I want to bring elephants onstage. I'll probably never do that, but I do want people to leave amazed, like, 'That was a performance!' Because I do feel a lot of people are doing the same thing. At this point, it's like what is there to be afraid of? How are you going to push the genre if you're afraid to explore?"

Much of Noise Cans' stagecraft, including Collas' masks, draws from Bermuda's Gombey culture — a folkloric music and dance tradition once banned by slave masters during the island's colonial period. It's now a cherished part of the island's culture, and one that inspired Collas tremendously growing up.

"You're hearing these sounds, and you walk outside and you see these colorful movements and these dancers," he said. "It becomes this thing that just becomes magical. Not a lot of people get to visit the Caribbean or Carnival. So many people have never seen what a Gombey is. I want to incorporate that into what the EDM movement is becoming, and shine more on my upbringing and the things that meant something to me culturally for the rest of the world."

Collas grew up in a very musical family. He had cousins who were classically trained and have played at Carnegie Hall, along with music teachers and music engineers on his mother's side. His family frowned on his affinity for lowbrow musical forms, like beats and DJing, but his parents allowed him to explore. Watching Diplo form Major Lazer and share some of the Caribbean's musical vibes with the world confirmed to Collas he was on the right path.

"Honestly, my first reaction [to hearing Major Lazer] was like, 'Shit why didn't I do this sooner?' because I had the idea a few years ago," Collas said. He's as much a fan as anybody. "Anybody who can shine light on the culture is cool with me. Obviously [Diplo] has a true love and understanding of Caribbean culture. If anything, there's now more opportunities for Caribbean artists to make music in that alternative fusion style, people like myself."

Collas takes his anonymity very seriously. He wears his mask during every show. He cooks up his music in such secrecy, even his parents and some of his closest friends don't even know he's masterminding Noise Cans.

He's not hiding, he explained. "It's more about me being free to express myself," he said. "It's like the Jim Carrey movie, The Mask. He puts on the mask and suddenly feels he can do anything. That's what I feel. Because every artist has insecurities. Any artist who tells you they don't is lying. It allows me to reduce that and pour more into my work."

Collas wants to offer his live show audiences the chance to experience this same release. He plans to start handing out masks to the crowd, so they can put their identities aside and feel nothing but the freedom of the dance floor.

The masked Bermudan is currently planning for a major musical offensive in 2016, with three Noise Cans EP releases on the horizon. Based on the response his single has already gotten, he's looking to slingshot all that buzz into an epic live debut sometime during the middle of the year. He's knee-deep in the process as we speak.

Listen to Noise Cans' recent mixes, including a song with American rapper Trey Songz, below.