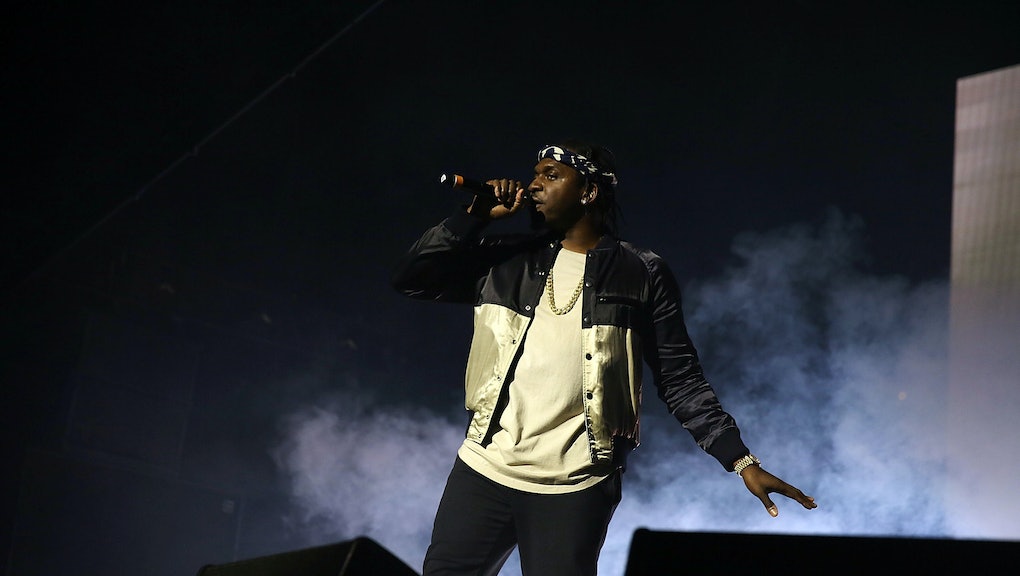 Pusha T fans won't be disappointed: Although his sophomore album, King Push — Darkest Before Dawn: The Prelude (which came out Friday), didn't appear to feature a collaboration with producer Pharrell Williams, Complex reports that a hidden track makes good on the rapper's previously made promise. Dubbed by the internet, the song "Switch It Up" was stashed in the closing credits of a short film Pusha T released with his album. It's now available to stream on SoundCloud.

Following the 2013 release of his first album, My Name Is My Name, Pusha T told Miss Info that his second album would feature a collaboration with The Neptunes (Chad Hugo and Pharrell). "January 2, me, Chad and Pharrell are going into the studio for 20 days [in Miami]," he told Miss Info. "That's what is going to start off the King Push album."

Darkest Before Dawn was scheduled to hit iTunes on Dec. 18 but Spotify released the album on Thursday, when Pusha T also decided to give New York fans an advance listen. "You know what NYC, Im feeling generous," he tweeted. "Meet me at 200 Park Ave south at 12:30 tonight for a free #DarkestBeforeDawn."

This latest LP comes out ahead of King Push, which Hot New Hip Hop says was anticipated as Pusha T's second solo album; Darkest Before Dawn is instead "a warm-up" to King Push, which is slated for spring 2016.

The full album is available on Spotify: