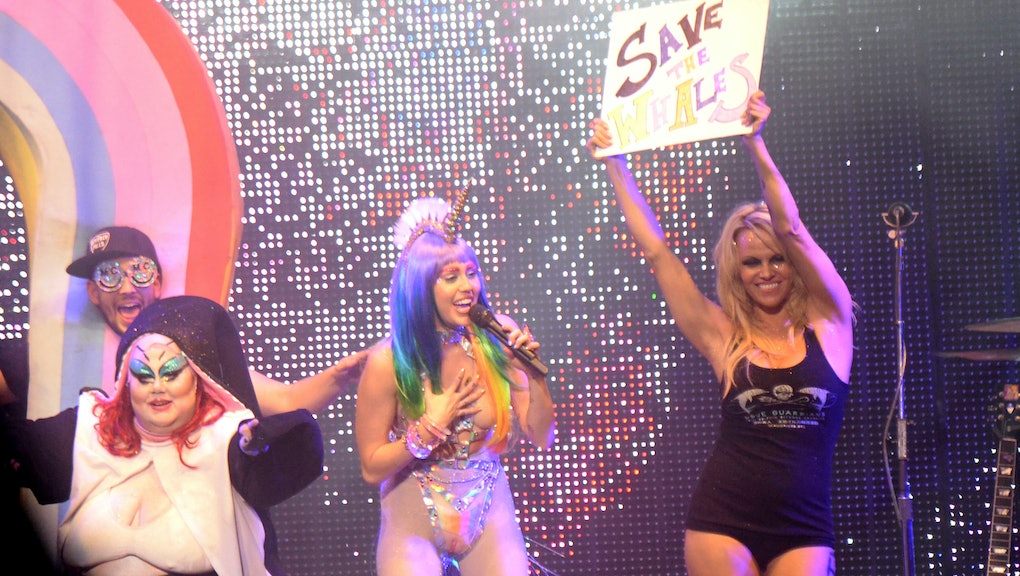 The theme of Saturday's two hour-long close-out concert of Miley Cyrus' Milky Milky Milk tour was all about animals, Entertainment Tonight reported. Taking place at the Wiltern in Los Angeles, Cyrus was accompanied by the Flaming Lips. During "We Can't Stop," Cyrus was joined onstage by Baywatch star Pamela Anderson, who pleaded audiences to "Save the whales," according to Movie Pilot. The pairing, who used the stage to promote animal awareness, is unsurprising, since both are dedicated animal activists.

The tour was formerly called Miley Cyrus and her Dead Petz, named after its namesake album, according to the Huffington Post, which features multiple tributes to her dearly departed pets. Cyrus was inspired to write the album after her dog Floyd died while she was on her Bangerz tour, according to the Los Angeles Times. The ballad "Pablow the Blowfish" is also dedicated to her former blowfish, Spin reported. With that in mind, it was quite fitting Anderson would make an appearance during this particular Cyrus extravaganza.

Anderson — who told the crowd to "Go vegan" and had "No captivity" scrawled on her leg — is a long-time supporter of animal rights, starting the Pamela Anderson Foundation, which supports human, environmental and animal rights, according to its website.

Cyrus herself is well-known for advocating for animal rights. In September, she posted on Instagram asking her fans to sign a petition against wolf killings, according to the Dodo. She also allegedly eliminated animal products from her lifestyle, according to Paper Magazine.

Among those who witnessed the whale advocacy were Zac Efron, Bella Hadid and Cody Simpson, according to US Magazine.