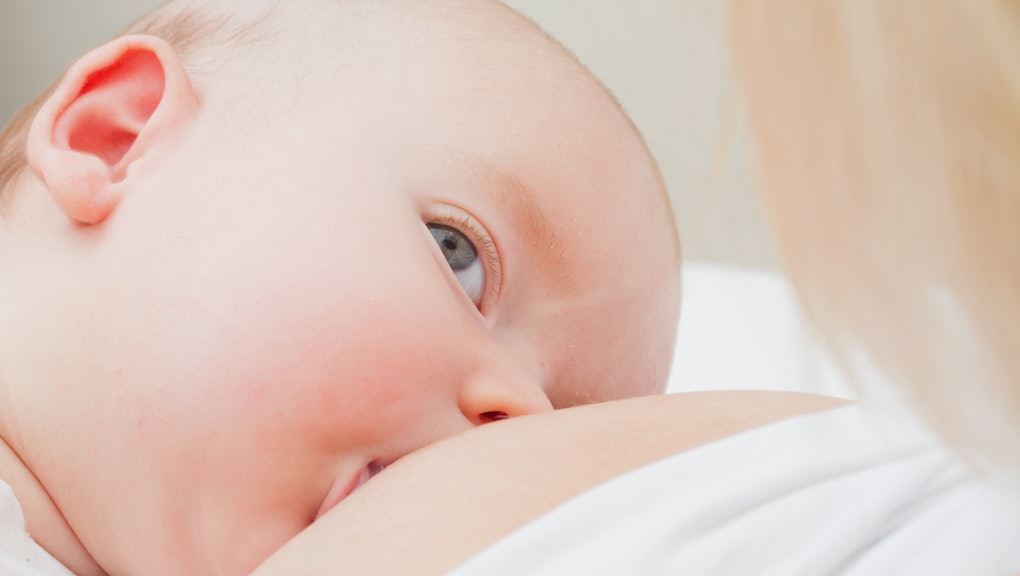 If you've ever stood in line to meet Santa at the mall, you know it's a fairly standard experience: Shake his hand, tell him what you want for Christmas, sit on his lap and say cheese for the camera while trying to ignore the fact that Santa smells an awful lot like Wild Turkey and SpaghettiOs.

One brave mother, however, decided to kick the standard Yuletide meet-and-greet up a notch by posing for a photo with Santa with two special friends in tow: her infant son and her nipple. That's right: Rebecca Dunbar decided to #FreeTheNipple while meeting Santa Claus.

Dunbar, 40, said she staged the photo at the Niagara Square mall in Niagara Falls.

"I asked the photographer if he'd be OK taking the picture and he said, 'yeah, for sure, if it was OK with Santa," the mom from Ontario told City News. "And Santa said, 'It's been 40 years and never had a question like that, but why not.'" (Mic has reached out to Dunbar and will update if we hear back.)

She said the photo was initially meant as a joke, she later decided to post it on Facebook in an effort to draw awareness to the importance of public breastfeeding. "Breastfeeding is still such a hot topic and it shouldn't be. I think people should just accept that it's a healthy thing," she said to City News.

It immediately received criticism, with many deriding Dunbar and accusing her of being "trashy."

"What a crock. Mothers know full well that babies get hungry and require feeding probably every couple of hours," one Facebook commenter wrote. (Dunbar has since deleted the photo and set her Facebook settings to private.)  "She could have either found a quiet spot... or she could have pumped breast milk first and put it in a bottle in case her baby got hungry. Instead, she decided to act like an exhibitionist."

While Dunbar's Christmas photo is indeed attention-grabbing, she's far from the first mother to purposely jumpstart a conversation about mothers and public breastfeeding. Just last month, a Facebook post by mom Ashley Kaidel went viral in which Kaidel railed against a restaurant where patrons shamed her for breastfeeding her infant son.

"Breasts were made to sustain your baby's life before they were made to bring pleasure to any other man, woman, partner or spouse," she wrote in the Facebook post, which has since racked up over 420,000 likes. "Their sole purpose is to make food and dispense it straight into a baby's mouth. There is nothing weird about this and there's no difference in me feeding my baby with my breast than you feeding yourself with a spoon."

Kaidel has a point: Despite our culture's endless fascination with and sexualization of women's breasts, breastfeeding is simply one of many ways for moms to feed their children (not to mention the healthiest, according to many parenting health resources.) With this in mind, it shouldn't be all that shocking that Dunbar decided to breastfeed during her son's visit with Santa. What's more shocking is that so many people were offended by it.

"It is quite disappointing that people are so negative about it when it's not meant to be that way," Dunbar told City News.