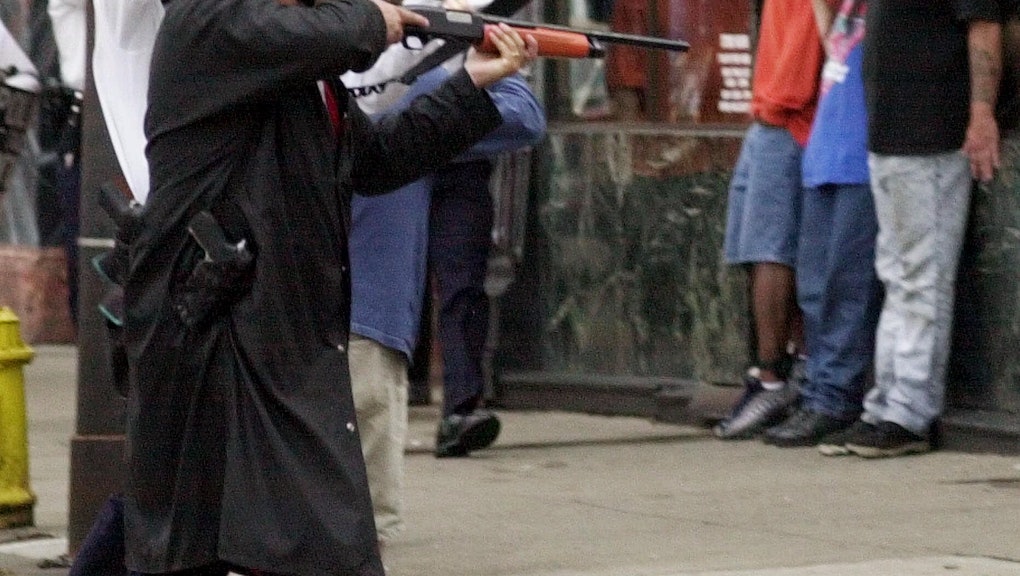 14 Years Ago, Riots Shook Cincinnati — And the City Revolutionized Its Police Force

A bullet pierces the heart of a black man in a dark alley. The police officer who fired the shot later claims he thought the man was reaching for his gun, but the man never had one. The city erupts in riots.

In 2015, such a sequence of events is tragically familiar, its contours resembling any number of instances of police violence and community outrage over the past two years. But it also describes an oft-forgotten episode that played out 14 years ago in Cincinnati, Ohio.

On a warm April night in 2001, an off-duty Cincinnati police officer spotted Timothy Thomas, who had 14 warrants out for his arrest, mostly for traffic violations. Thomas started running, and the officer chased him, calling for backup. Thomas ran into a poorly lit alley, where he was shot in the chest by one of the officers. He died shortly after arriving at the hospital. He was 19 years old, and had an infant son.

His death marked the fifteenth time in six years a black man had died at the hands of Cincinnati police, and it turned out to be one too many. In the aftermath of his death, crowds stormed city hall, stores were set ablaze and gunfights broke out between the police and protesters. The days of turmoil shook the city and captivated the nation, but what really changed the city was what happened afterwards — following an investigation by the Department of Justice, Cincinnati agreed to reform its police department, instituting several sweeping changes in how officers engaged with the community.

Cincinnati's settlement with the federal government, which included the appointment of a federal monitor to supervise the city's progress, was not unlike the impending agreement between the city of Ferguson, Missouri, and the Department of Justice. In Ferguson, the killing of Michael Brown by Officer Darren Wilson in August 2014 set off nationwide protests and a federal investigation into the Ferguson police. The specific details of the settlement have yet to be finalized, but the outlines of an agreement include provisions that would allow the Ferguson police to avoid a federal civil rights lawsuit by ushering in a collection of reform measures to improve police conduct in the embattled St. Louis suburb.

Cincinnati's experiment with police reform in the 2000s is a useful case study for considering the potential effects of this kind of arrangement. The city is certainly not yet out of the woods on issues of police safety — earlier this year, an unarmed black man was killed during a routine traffic stop — but it has come a long way. Since 2001, incidents of police using force against suspects and citizen complaints against the police have plunged. Arrest rates have decreased dramatically. All the while, the crime rate has declined as well. Here's how they did it.

The changes: Much like Ferguson, Cincinnati suffered from deeply rooted problems in police-community relations long before a single high-profile death sparked an eruption in the city. Black residents, who comprised over 40% of the city population, had repeatedly criticized the police for racial profiling and police brutality with little response from the city. In 1999, Bomani Tyehimba, a Cincinnati businessman who said he was held at gunpoint during a routine traffic stop, filed a lawsuit charging that the city's police department had discriminated against the black citizens of Cincinnati with impunity for years on end.

The killing of Thomas in 2001 and the reaction — marked by peaceful protests, the largest riots since the Rodney King riots in Los Angeles in 1992 and a boycott of downtown Cincinnati by the advocacy group Black United Front — ultimately prompted federal involvement and created an impetus for reform.

In 2002, the Department of Justice reached a Memorandum of Agreement with the city of Cincinnati and the Cincinnati Police Department. The agreement created a mandate for major changes in policing policy and community engagement. Crucially, an accord called the Collaborative Agreement, born of the Tyehimba lawsuit, was reached alongside the memorandum. A month before Thomas' death, the ACLU and the advocacy group the Black United Front had joined the lawsuit. The settlement served as the foundation for an agreement between the city, the police union and the black community in the wake of the riots.

While the Memorandum of Agreement between the Justice Department and the city laid the groundwork for concrete changes in policing and data collection, it was the Collaborative Agreement that helped ensure that the community was highly involved in shaping those reforms and providing feedback on their progress.

After 2002, the Cincinnati police department began to shift away from a conventional enforcement strategy, which helped systematize racial profiling  — something even the city's police chief acknowledged in 2001 — and move toward a more proactive policing model. The goal was to have the police partner with the community rather than simply supervise it, and focus on addressing the underlying reasons for crime rather than just constantly throwing suspects in jail.

"You had to demonstrate to the community that you as the police officer are there to help them, not just to police them," Mike Brickner, senior policy director at the ACLU of Ohio, told Mic. "So they practiced proactive policing, and had police officers who were listening to the concerns of the local neighborhood and helping to devise solutions to those issues that did not necessarily involve going in and arresting everyone."

The new policing paradigm emphasized locating the structural and environmental cues that produce surges in crime.

Brickner said the Cincinnati Police Department began having frequent meetings with the community, usually every week. Officers conducted more foot patrols and walk-throughs of neighborhoods with community members to locate hot spots of crime. The department issued new use-of-force guidelines, and officers were trained to limit their use of force. They were taught how to deal with suspects with mental health issues and how to handle encounters in low lighting — like the very one that resulted in the killing of Thomas. A Citizens Complaint Authority was established to oversee independent investigations of police officers who were accused of misconduct by members of the community.

The new policing paradigm emphasized locating the structural and environmental cues that produce surges in crime, Brickner said. Before the settlement, a blighted corner house that served as a hub for prostitution may have been shut down by mass arrests. Under the new strategy, officers were trained to employ alternative methods of policing, such as directing suspects to rehabilitative drug recovery clinics and job programs, or tearing down the house entirely. If a liquor store was located in a crime hot spot, police would adjust their patrolling patterns in the area to keep a closer eye on it, sometimes installing additional streetlights in the area. Eventually the police launched a highly targeted effort to crack down on gang members and repeat violent offenders. Through a combination of attention to community grievances and careful observation of crime data, the police began to pinpoint and prevent the the chief sources of social disturbance in an area.

By many measures, it worked.

Easier said than done: Cincinnati's successful reduction of overbearing police behavior wasn't quick or easy. For years, black residents didn't see the changes they desperately needed. Many key players in the city administration were reluctant to institute the new rules and the police department, which felt unfairly vilified, was resistant to change. But after a few years of frustrating stops and starts, the police began to adopt the reforms in earnest.

After years of pressure from the federal monitor, the ACLU and black community groups, there was a shift in energy after the election of the first directly elected black mayor in Cincinnati history in 2006, who appointed a new city manager who became much more actively involved in police-community relations meetings from the Collaborative process. Over time, the police began to make good on the changes they had promised to make for years.

Today, the relationship between Cincinnati's police and its black residents are nowhere near perfect. While policing has improved, plenty of citizens in low-income neighborhoods still complain of aggressive police behavior in their neighborhoods, and report that harassment remains the norm. A University of Cincinnati police officer shot and killed a man during a traffic stop in July — the officer wasn't from the city police department, but the incident affected the perception of policing across the city nonetheless. The persistence of extreme economic inequality along racial lines and concentrated pockets of poverty in Cincinnati places a ceiling on how much safety can be achieved in its roughest neighborhoods — without economic opportunity, there are limits on the ability of both the community and law enforcement to combat crime.

But, on the whole, Cincinnati's changes provide more inspiration than cynicism. The concrete changes the city made to the way police relate to the community have paid off and made the city tangibly safer for everyone.

The initial set of reforms initiated by the federal investigation are no longer binding, but the city still practices them for one obvious reason — because the new policies work better than the old ones.

There's no guarantee that Ferguson will see similar results — if anything, Cincinnati's slow start demonstrates that the challenge of getting all stakeholders on board is as important as a stated commitment to change. But it is a reason for some hope.