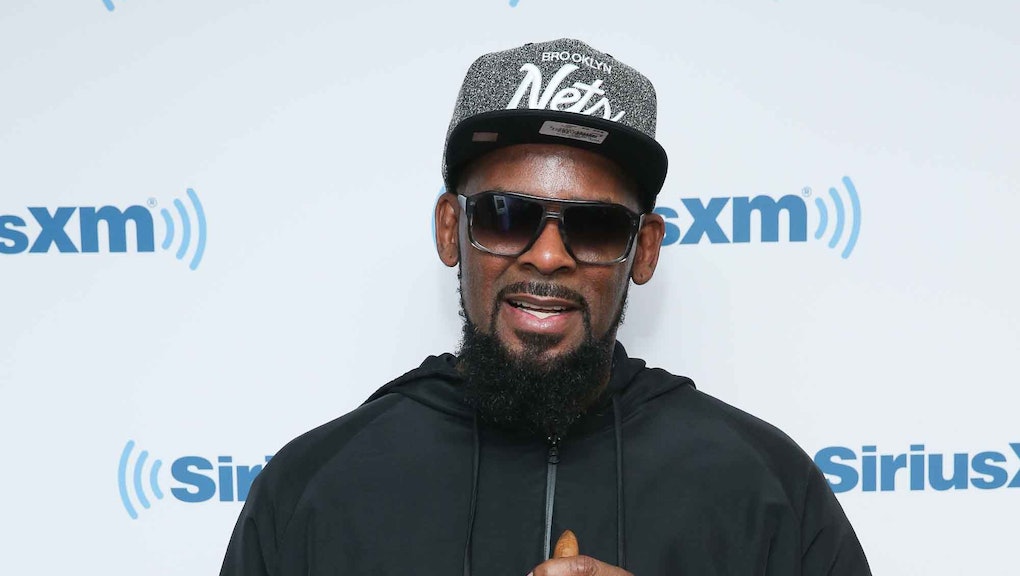 What Will It Take for the World to Turn Against R. Kelly Like It Did Bill Cosby?

Throughout the last two decades, R. Kelly has been accused of sexual assault dozens of times. He was arrested, and later acquitted, on 21 counts of making child pornography. In the most infamous of them, he allegedly urinated in a young girl's mouth. He made Aaliyah his child-bride when she was just 15.

Kelly has never been convicted of a crime but there remain numerous allegations on the record.

In other words, Kelly is in much the same position as Bill Cosby: never convicted but haunted by the past. So why hasn't the world turned on Kelly the way it did Cosby?

Monday afternoon, Kelly appeared on HuffPost Live in an interview promoting his new album, The Buffet. Host Caroline Modarressy-Tehrani asked him about the depressed sales for The Buffet and how these allegations might have affected them. Kelly accused Modarressy-Tehrani of setting him up, commented on the host's appearance and talked over her questions before walking out of the interview.

Modarressy-Tehrani's questions were not a form of ambush: She was asking questions about accusations that are public knowledge. Though not a polite question, she is a journalist — it's not her job to be polite, but to get answers. Instead of providing those, Kelly walked away.

It's not entirely his fault he was expecting a walk in the park, though. He's too often treated with kid gloves. In press clippings for The Buffet, there are surprisingly few mentions of the allegations. USA Today's review of the album calls them "accusations of misdeeds" without greater context or explanation. The New York Times mentions his acquittal on the child pornography indictment in passing. The Independent doesn't mention the allegations at all, but does call Kelly "the sole true heir to Marvin Gaye's love-god crown."

As news outlets gloss over the allegations — Erykah Badu said Kelly, "has done more for black people than anyone" at the BET Soul Train Awards — the R&B singer gets vaulted to untouchable heights. What will it take for his fans to abandon him? Why is he still working and making music?

Last month, New York magazine ran a profile of Kelly ahead of The Buffet's release: "Is It Okay to Listen to R. Kelly?" delves into the difficulties of reconciling the wordsmith who wrote legendary party jam "Ignition (Remix)" with these allegations. Writer David Marchese spoke to music journalist Jim DeRogatis, a Chicago Sun-Times writer who reported on Kelly and brought the charges back to light in a 2013 interview with the Village Voice. He specifically asked about the Cosby comparison — and proposed that Kelly's treatment is about the color of his victims' skin.

"Why haven't we reached a Cosby-style tipping point with him?" DeRogatis asked. "R. Kelly had the good sense never to go after a white girl from Winnetka. He didn't go after Janice Dickinson. He was [allegedly] targeting inner-city black girls. The white world, with some exceptions, did not give a fuck. Certainly not in the way they did about Cosby, who was an actual crossover artist."

Another key difference: Cosby was never tried for his crimes. Since Kelly was acquitted of one particular case, he may be easier to excuse. One man in the New York magazine profile even says, "Innocent until proven guilty. This is America."

Definitive proof or testimony about what happened would change the game. But Kelly isn't going to give that.

Kelly does not have to answer for the allegations. He was tried and acquitted. He can walk out of every uncomfortable interview and ignore the journalists who challenge him. Remember that even Cosby has never commented fully on his own accusers' statements.

How his supporters treat him is what matters now. Is abetting a man arrested on 21 counts of child pornography worth ironically enjoying "Trapped in the Closet"? Is "Ignition (Remix)" still a bop when thinking about a young girl coerced against her will? Will anything change how the world treats R. Kelly?

To quote DeRogatis from the Village Voice, "The saddest fact I've learned is nobody matters less to our society than young black women. Nobody."