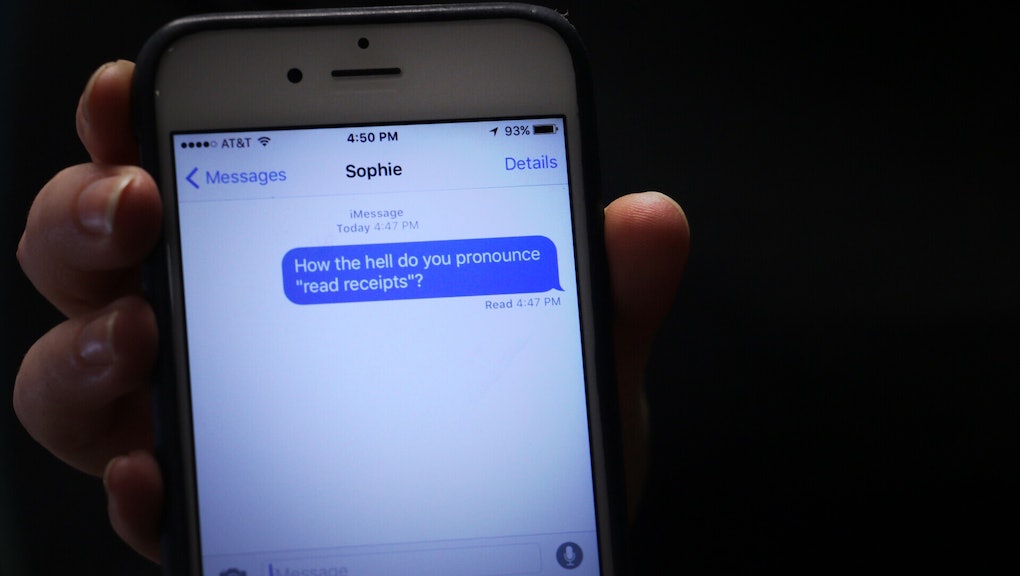 Is It "Reed" Receipts or "Red" Receipts? We Finally Settled the Infamous Debate

If you text on an iPhone, you have the option to let your friends know when you've received their messages — a simple notification that says "read." It's called a "read receipt," and until this week, the only debate about them was whether to turn them on or leave them off for good.

Less thought has been paid, however, to a more subtle distinction: the phrase's pronunciation. Do you say "reed" receipts or "red" receipts? Are we referring to the past tense of the verb "to read" or are we treating "read" as a noun, like the phrase "receipt of purchase"?

The debate has been tearing the internet to pieces. We finally have a definitive answer.

To first gauge the public's feelings on this vital topic, Mic's Cooper Fleishman tweeted out a poll asking which version was correct. The past-tense form won by a hair, with 43% of the 355 votes cast.

As with other aspects of the larger read-receipt debate, people had mighty strong feelings about the whole affair.

Despite the overwhelming and grammatically sound logic of "red" — it's an acknowledgement of an action that's already happened — Team Reed refused to back down.

Mic copy editor Kaitlyn Jakola made the "reed" pronunciation official in our style guide. "It's the receipt for a read, like the noun, 'read,' that you give something," she said. Going forward, she said, Mic's editorial standard would treat it as "reed."

We then reached out to Apple. In an email, a spokeswoman said that after looking through the World Wide Developer's Conference keynotes, she couldn't find verbal mention of the phrase. She was unable to point in one direction or the other.

The debate seemed to sink into a stalemate. But the Apple rep missed this video of the 2011 WWDC keynote address — tipped to us by Femsplain editor Gabriela Barkho — during which former Apple executive Scott Forstall introduced the new iMessage feature. It included some cool new specs, he said, including "delivery receipts, so you can see if it's been delivered to the other person's device."

Then he dropped the hammer.

"And optional read receipts, so you can see if it's been read," Forstall said, very clearly pronouncing it "reed receipts."

Of course, this is just Scott Forstall's pronunciation, and it doesn't necessarily mean that it's his way or the highway. Just like in the debate over GIF with a hard or soft "G," one person's authoritative opinion doesn't automatically mean that everyone else is wrong.

For now, however, we seem to have a semi-formal answer to the great "reed" versus "red" debate of 2015, and it feels like the Red Wedding (or is it the Reed Wedding?) all over again.