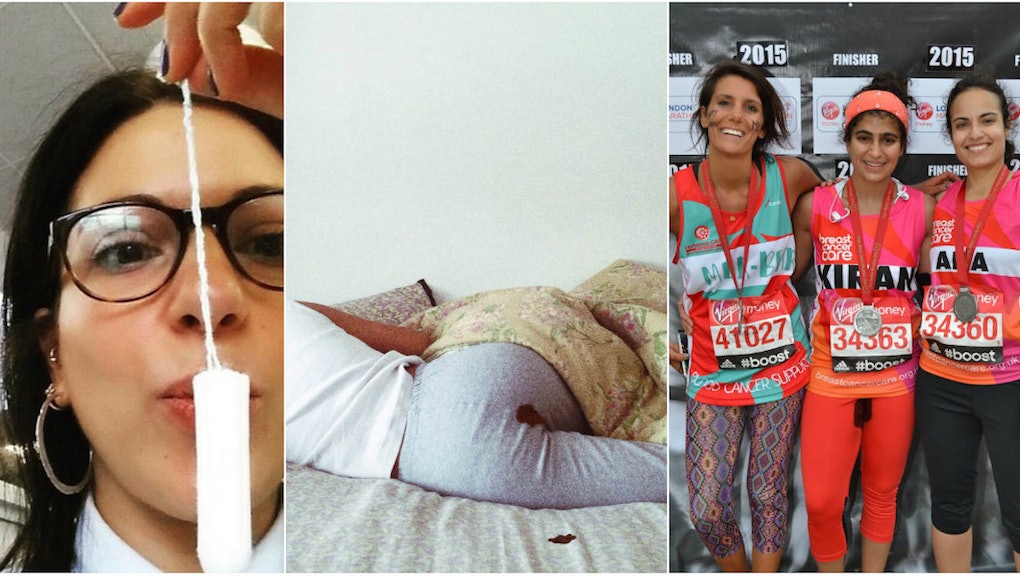 In a culture that cringes at the thought of menstrual blood, 2015 was officially the year that women fought back against period-shaming.

From the saga of Kiran Gandhi, the free-bleeding marathon runner, to the photographer who took a stand against Instagram banning her pro-menstruation photo, 2015 was the year that women finally learned to stop worrying and love their periods (or at least, they stopped GAF about them).

Here are nine times this past year that women turned the tables on menstrual stigma, celebrating their periods as positive — hell, even beautiful — things.

1. Instagram deleted a photo of a woman's period-bloodstained pants and sheets but the photographer didn't go down without a fight.

In March, photographer Rupi Kaur posted a photo on Instagram of a woman lying in bed with menstrual blood both on her pants and the sheets. The photo wasn't deleted just once, but twice by Instagram, which argued that the photo violated "community guidelines."

Kaur's response to the incident was both furious and poignant.

"I bleed each month to help make humankind a possibility. my womb is home to the divine. A source of life for our species," Kaur wrote, adding, "I will not apologise for not feeding the ego and pride of misogynist society...where women (so many who are underage) are objectified, pornified, and treated less than human."

Instagram eventually apologized and put the photo back up.

2. A former communications director for President George W. Bush admitted to ? gasp ? getting her period while working in the White House.

In April, Time published an op-ed suggesting that Hillary Clinton would make for a good president because she's postmenopausal, which makes her more "resilient" and less emotional than women who still menstruate. In response, the Nightly Show with Larry Wilmore hosted a panel where three women talked openly about menstruation.

Nicole Wallace, communications director for former President George W. Bush, said, "Yes, I worked in the White House. And yes, every 28 days I bled, but the country went on." So yes, contrary to popular belief, a woman is indeed capable of making sound political decisions while bleeding between her legs.

3. In June, the #JustATampon campaign launched.

Although it originally started in London, the #JustATampon campaign began trending on Twitter and Instagram, with people posting photos of themselves with tampons. The campaign was launched to create awareness of the taboos surrounding menstruation, as well as to educate about the importance of menstrual health around the world.

Conceptual artist and so-called "menstrual designer" Jen Lewis decided it was time to not only tackle the period taboo, but ask women to examine just how beautiful their own menstrual blood can be. So she launched a macrophotography project, "Beauty in Blood," in which menstrual blood is dumped into toilet water and photographed up close to create images that are almost larger than life.

According to Lewis, "Shooting sessions can last anywhere between 60 seconds and 30 minutes depending on the volume of menstrual fluid collected as well as the consistency." Lewis was originally inspired to create the series after she switched to menstrual cups and saw how her blood looked when it was poured into toilet water.

5. Kiran Gandhi ran the London Marathon without a tampon or pad, despite being on her period.

As Gandhi wrote for the Huffington Post in August, she got her period the night before running the marathon. While she considered running it with a "wad of cotton material wedged between my legs," she eventually realized that seemed "absurd."

"I could choose whether or not I wanted to participate in this status quo of shaming. I decided to just take some Midol, hope I wouldn't cramp, bleed freely and just run..." she wrote. "Why not use it as a means to draw light to my sisters who don't have access to tampons and, despite cramping and pain, hide it away like it doesn't exist?"

Although many were grossed out by her decision to freebleed, Gandhi said her goal wasn't just to incite shock, but also to draw attention to menstrual health stigma around the globe. (She also inspired at least one Mic staffer's Halloween costume.)

6. #PeriodsAreNotAnInsult became a Twitter trend thanks to Donald Trump.

In response to Trump's comments about Megyn Kelly bleeding "out of her whatever," following a Republican debate in August, women decided to respond by live-tweeting their periods.

Fellow Republican and presidential candidate Carly Fiorina also responded by sharing her own experience of being period-shamed, telling CNN's Jake Tapper, "I started out as a secretary. And as I made my way up in the business world, a male-dominated business world, I've had lots of men imply that, um — I was unfit for decision-making because maybe I was having my period."

7. Sarah Levy painted a portrait of Donald Trump with her menstrual blood.

Appalled by Trump's comment about Kelly, Portland artist Sarah Levy decided his outrageous remarks merited an equally outrageous response. After collecting blood from her Diva Cup, Levy went to work with a brush and a tampon and created the most beautiful portrait of Donald Trump the world has ever seen: One of his angry mug, clearly in full rant mode, done in her menstrual blood. It wasn't just a "fuck you" to Trump and his comments, but a powerful statement: Women menstruate, and we shouldn't be ashamed of it.

8. Menstrual underwear company Thinx was shot down by the MTA — and won.

When Thinx created an underwear line "committed to breaking the taboo of menstruation," the company thought the best spot to start the period-positive revolution would be on the New York City subway system. While the Metropolitan Transit Authority guidelines prohibit ads of a "sexual nature" — with menstruation obviously not falling in this category — the MTA advertising company objected to the ad on the grounds that it was too "risqué."

After a great deal of public backlash, Thinx won; the ads made their debut on the Bedford Avenue L train Nov. 9.

9. Mexican singer Patricia Navidad lost her pad on live TV and laughed it off.

During a performance on live TV, singer Patricia Navidad lost her pad. Although some women would've freaked the eff out and ran offstage, Navidad kept on singing. She later responded to the incident on Twitter, joking that she never throws out towels (as pads are called in Spanish), "unless I don't need it anymore." She also responded to backlash she received from men, tweeting that it was "nothing to be ashamed of."