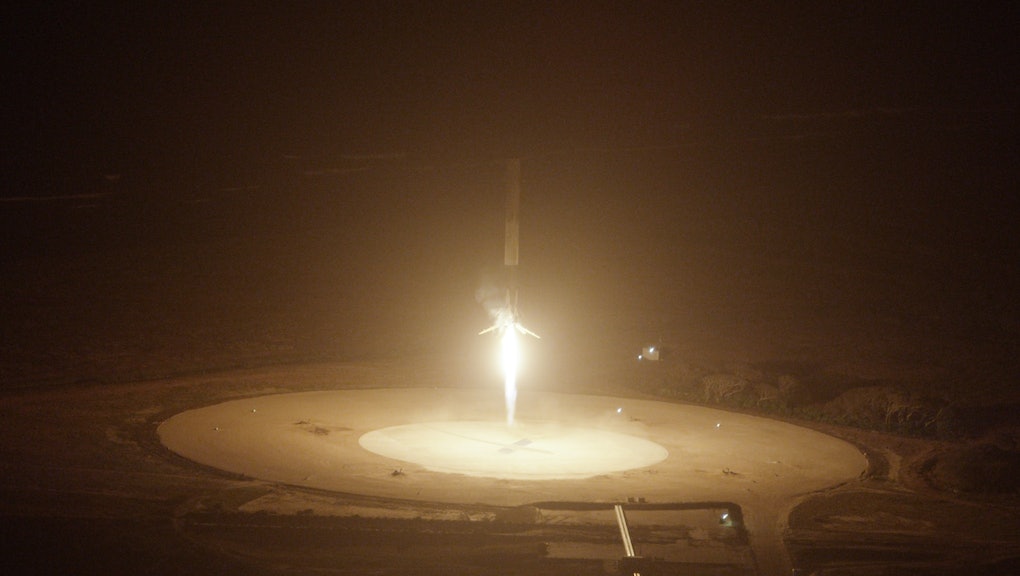 With a Historic Landing, SpaceX Just Ushered Us Into the Future of Space Flight

On Monday night, SpaceX, Elon Musk's private aerospace company, launched its Falcon 9 rocket into space and landed it, upright and unexploded, back at Cape Canaveral in Florida.

SpaceX has been attempting to launch and land a rocket for the last year in a play for reusable vessels. The fact that this one landed means we can cut down on potential time between missions, saving millions of dollars in the process; Musk says the figure is about $16 million per flight, or the cost of a Falcon 9. For a while, that money went to Russia for its Soyuz booster engines.

You may remember another rocket launching and landing back on Earth. In November, Amazon CEO Jeff Bezos' aerospace company, Blue Origin, announced that its New Shepard rocket did the same thing.

In case you forgot, Bezos himself took to Twitter on Monday to tease SpaceX with the line, "Welcome to the club!"

But here's the thing: As much as everyone should support a neck-and-neck space race, that's not what's happening. The New Shepard rocket was built to put a couple people into sub-orbital space for a few minutes (Blue Origin is, after all, a space tourism company), not blast millions of miles into the universe. New Shepard's design reflects its mission: It's short and stout. Falcon 9, however, is built to fly much farther — beyond Earth's orbit, carrying with it payloads, like the ones that you'd need to resupply a space station or, eventually, stock up a Mars base.

Because of what it needs to do, Falcon 9 is long and slender to create less drag leaving Earth, and landing it is like dropping a pencil only to have it land upright on its eraser. Landing New Shepard isn't necessarily an easy endeavor either but again, its body is short and stout. Plus, New Shepard only went 62 miles up, while Falcon 9 flew 124 miles above Earth, traveling much faster than Bezos' machine.

In fact, while we're on the subject of suborbital landings, Musk probably got there first anyway. At least, that's what he claimed to Bezos.

The best part is, the world will probably make huge strides in space travel thanks to the hubris of a couple billionaires, each trying to one-up the other as our society careens toward outer space.

Or, in the immortal words of Phantom Phreak in the movie Hackers: