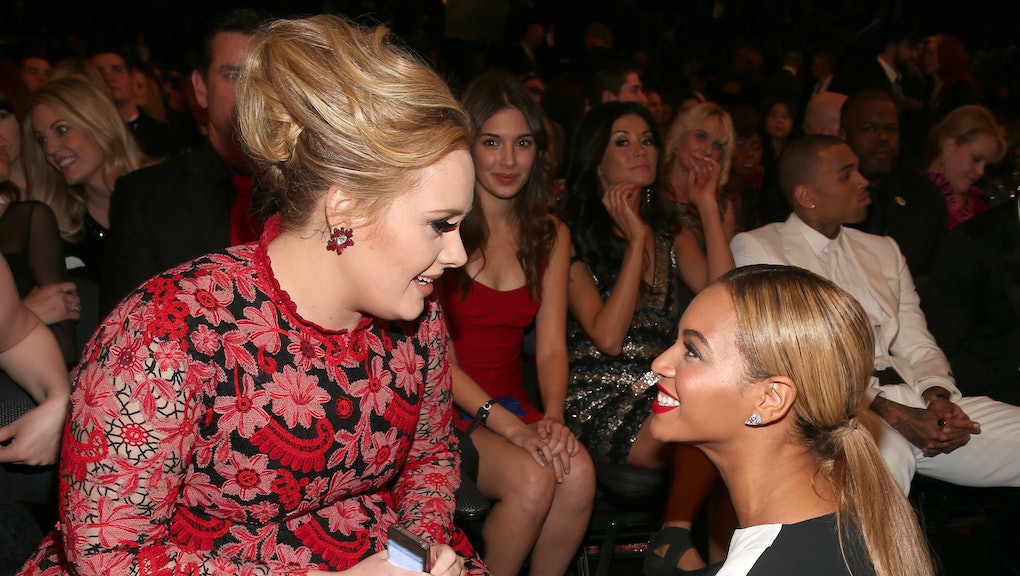 Adele Calls Rumor She Turned Down Duet With Beyoncé "A Laugh"

Adele has dispelled the crazy rumor that she turned down a duet with Beyoncé and also wants the world to know that she loves Queen Bey almost as much as her first born.

"Whoever started that rumor must have been having a laugh because anyone who knows me knows that my main priority in life outside of my child is Beyoncé," Adele told Time for her cover story interview that hit shelves Monday.

The rumor that Adele turned Bey down came in November, around the release of 25, when an unidentified source told Heat magazine that Bey has been trying to collaborate with Adele for years but hasn't been able to.

The platinum artist disclosed that she wanted a duet with a different artist on the album, but the logistics didn't pan out. "I really wanted to do a duet on this album," she told Time. "I spoke to someone about it who I wanted to do it with, and we got on like a house on fire, and then we just couldn't logistically really get it to work. I can't say who it is because I want to do it in the future. That's the only reason. It wasn't Beyoncé."

Adele also discussed her lack of social media use in the interview, saying — in the most Adele way — that it's too distracting. "My life has changed so much, but I've made the realest record I can make, and it's the real part of me. How am I supposed to write a real record if I'm waiting for half a million likes on a fucking photo? That ain't real."