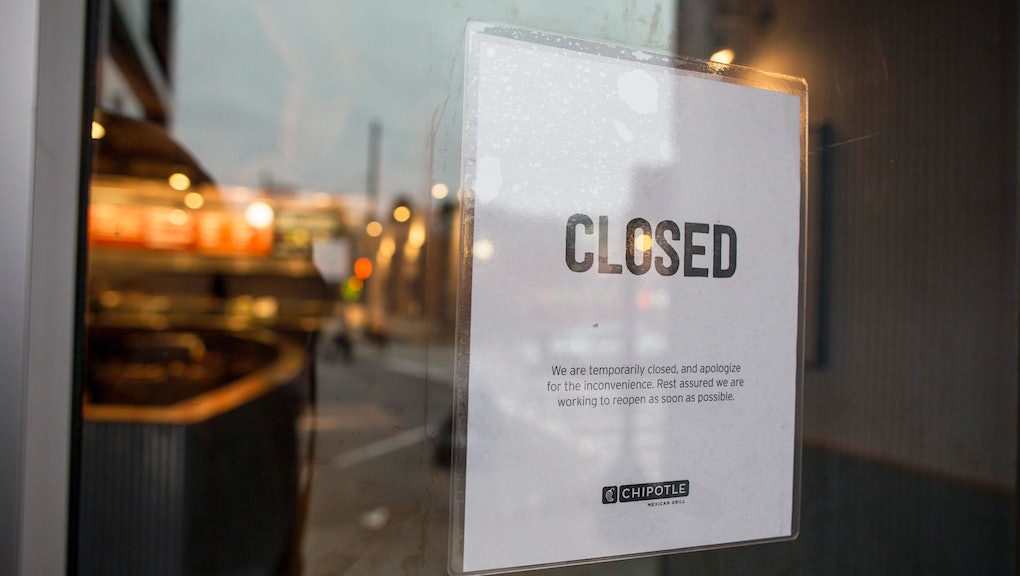 Here's Everything You Need to Know About the E. Coli Outbreak Linked to Chipotle

Chipotle is in hot water thanks to multiple E. coli outbreaks that have caused dozens of illnesses across the country, and the fiasco is making company executives, stockholders and devoted customers sick to their stomachs. On Monday, the restaurant chain's problems worsened when the Centers for Disease Control and Prevention reported six new cases of E. coli in Kansas, North Dakota, Oklahoma and Pennsylvania. Five out of six of the individuals reported ill confirmed they'd eaten at a Chipotle restaurant within a week of falling sick.

"Implementing all facets of our enhanced food safety program is our highest priority," Chris Arnold, Chipotle's Communications Director, told Mic via email. "Many components of that program are in place now, and we will implement all facets of it as quickly as we can."

Meanwhile, the investigation into the outbreak is ongoing.

"State and local public health officials continue to interview ill people to obtain information about foods they might have eaten and other exposures in the week before their illness started," the CDC said in a Dec. 21 statement. "To date, 46 (88%) of 52 people interviewed reported eating at a Chipotle Mexican Grill restaurant. The investigation is still ongoing to identify common meal items or ingredients causing illness."

When the outbreak began: The CDC reports that people began getting sick between Oct. 19 and Nov. 14, and the outbreak started on the west coast. At the onset, the contamination caused the closure of 43 Chipotle locations in Washington state and Oregon. In a statement, the Washington State Department of Health said it was working with the Food and Drug Administration and the CDC during the ongoing investigation.

Problem begins to spread: On Dec. 4, the CDC reported on the outbreak again, confirming that illnesses were connected to the fast-casual restaurant and updating the total number of individuals and states affected by the contamination. To date, the majority of cases have been reported in Washington and Oregon, with other reports of illnesses in California, Minnesota, Illinois, Ohio, Pennsylvania, New York and Maryland. According to the CDC, a total of 53 cases have been reported, including 20 hospitalizations.

Here's the CDC's most recent data:

Yet according to a Tuesday statement from the U.S. Food and Drug Administration, the true scope of the problem may not be immediately known. The FDA is working to track two separate C. coli strains linked to Chipotle. For that reason, the actual number of recorded illnesses may be underreported.

"The FDA, CDC, and state and local officials began investigating an outbreak of a different Shiga toxin-producingO26 (STEC O26) linked to Chipotle Mexican Grill restaurants during December 2015," the FDA explained in a statement.

The Boston College incident: A separate contamination caused 80 students to fall ill at Boston College in early December. The contamination was linked to a Chipotle location near, not on, the university's campus. At the time, a representative for Chipotle told CNBC that the company didn't think the incident was linked to E. coli, but instead believed a "norovirus" caused the contamination. On Dec. 11, the Boston Public Health Commission released a statement confirming norovirus as the cause of the outbreak, after a joint investigation by the BPHC, the City of Boston Inspectional Services Department. and the Massachusetts Department of Public Health.

Just before the incident at Boston College, Chipotle addressed the controversy head on.

"When I opened the first Chipotle 22 years ago, I offered a focused menu of just a few things made with fresh ingredients and prepared using classic cooking techniques," Chipotle co-CEO Steve Ells said in a Dec. 4 statement. "We do the same thing today, even with nearly 2,000 restaurants, and we are working harder than ever to ensure that our food is safe and delicious."

The company called for reinforcements by bringing on Seattle-based IEH Laboratories and Consulting Group, and pledged to implement a brand new multi-step food safety program.

"This food safety plan includes expanded high resolution testing of ingredients, changes to some food handling and prep procedures, and enhanced training for employees," Arnold said. "With all facets of this plan in place, we are confident that we can reduce risks in this area to a level near zero. As we get additional components of this plan in place, we will continue to share information with customers online and through other marketing programs."

The blanket apology: Given the timing of Chipotle's food safety apology and the subsequent outbreak at Boston College, Ells again confronted the issue, this time with a widely distributed apology.

"I'd like to take this opportunity to apologize on behalf of all of us at Chipotle," Ells wrote in a print ad that Chipotle ran in dozens of major newspapers. "The fact that anyone has become ill eating at Chipotle is completely unacceptable to me, and I am deeply sorry."

"In the end, it may not be possible for anyone to completely eliminate all risk with regard to food (or from any environment where people congregate), but we are confident that we can achieve near zero risk," Ells wrote.

"We have communicated with investors throughout this process, filing a form 8K with the SEC regarding the impacts to our business on Dec. 4, participating in a significant investor conference and meeting with a number of investors in early December, and continuing to engage with our investors throughout," Arnold said.

For consumers, the concerns are evident, even if the exact source of the contamination is not. "The epidemiological evidence available at this time suggests that a common meal item or ingredient served at Chipotle Mexican Grill restaurants in several states is a likely source of this outbreak," the CDC said in its Dec. 21 statement. "The investigation has not identified what specific food is linked to illness."

That's important for vegetarian Chipotle consumers who may think the source of contamination is in the restaurant's meat supply, and that they therefore run no risk by eating at Chipotle. Remember that E. coli outbreak tied to Costco's chicken salad in early December? The source of contamination in that outbreak was ultimately traced back to the celery mix used to prepare the store-made chicken salad.

"Early in the new year, we should have all facets of our enhanced food safety program in place, and will be working to establish Chipotle as a leader in food safety in much the way the company has become a leader in its use of great quality ingredients in a fast food setting.

What to do if you've eaten Chipotle and fall ill: According to the FDA, individuals will typically begin to show symptoms anywhere from two to eight days after ingesting the E.coli, depending on the bacteria strand, and symptoms of contamination largely  involve gastrointestinal issues.

"People of any age can become infected," according to the FDA. "Very young children and the elderly are more likely than others to develop severe illness and HUS [a potentially fatal complication that occurs in about 10% of E. coli patients]. Children and young adults can become seriously ill. In this particular outbreak, the age range of ill patients is 1 to 67 years."

The FDA recommends individuals seek medical help if they fall ill after eating at Chipotle. Consumers can also head to the CDC's guidance page.

"With regard to food safety, our programs have been within industry standards, and these incidents have shown us that we need to do better," Arnold said. "Through the programs we are putting in place, we think we can establish Chipotle as a leader in food safety just as we have in other areas of our business."