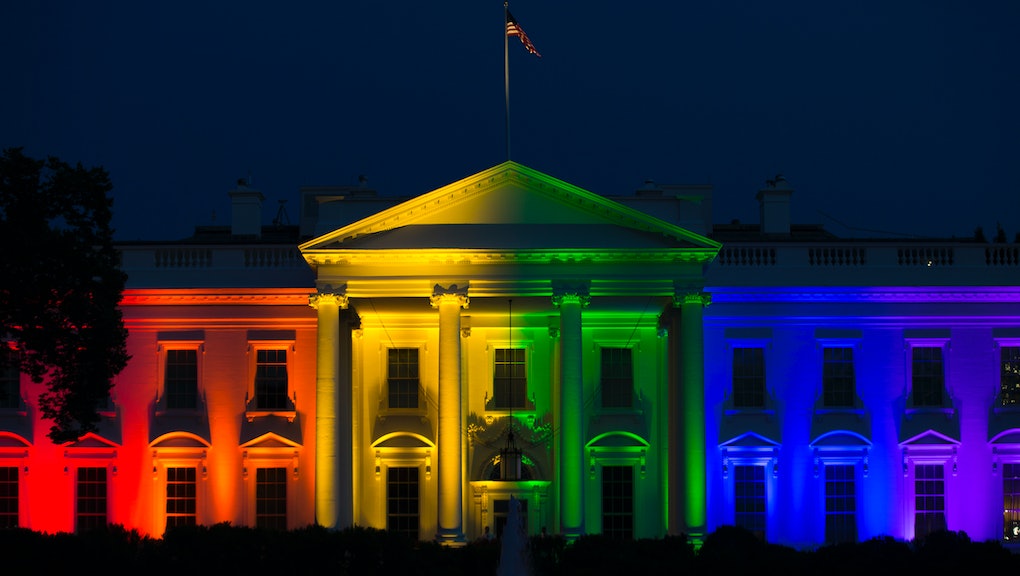 The 11 Unforgettable Moments That Prove 2015 Wasn't the Worst

2015 felt, at times, like the worst year in recent memory. But in a sea of remarkably depressing news, a few events stood out, proving 2015 would not deserve to be tossed aside and labeled garbage. It was a year of gender positivity, climate change cooperation, freely waving nipples, markedly fewer death sentences, states taking stands against racism, meaningful representation, staggering generosity, improved access to higher education and plummeting global poverty. It was, in fact, a pretty good year.

Here are the 11 moments that made 2015 better than you're remembering.

1. Love won, with a little help from SCOTUS.

On June 27, the United States became the 21st country to legalize gay marriage with the Supreme Court's landmark decision in Obergefell v. Hodges. In his assent, Justice Anthony Kennedy wrote of same-sex couples, "Their hope is not to be condemned to live in loneliness, excluded from one of civilization's oldest institutions. They ask for equal dignity in the eyes of the law. The Constitution grants them that right." The ruling reflected the national mood: More Americans supported same-sex marriage than ever before.

2. We were finally comfortable enough to #FreeTheNipple.

2015 was a banner year for body positivity, one in which women rejected the sexualization of their breasts and shed their shirts on social media. It began in New York, when filmmaker Lina Esco took a "stand against female oppression and censorship" and made a movie showcasing the double standard that exists between women and men when it comes to public nudity. Thus, a hashtag was born: #FreeTheNipple took off in 2015, when Icelandic teen Adda Þóreyjardóttir Smáradóttir was barraged with threats and hateful messages after posting a picture of her bare breasts online. Feminists rallied around her, flooding social media with their own topless shots. And it's still going strong — the movement has 169,000 Twitter followers and the hashtag has inspired 3,053,138 Instagram posts to date.

3. For the first time ever, global poverty dipped below 10%.

The World Bank forecasts that in 2015, the global percentage of people living on less than $1.90 will drop below 10% for the first time. In 2012, 12.8% of the world's population was living in extreme poverty. This year, that percentage has fallen to 9.6. "This is the best story in the world today," said Jim Yong Kim, the World Bank Group's president. "These projections show us that we are the first generation in human history that can end extreme poverty."

While continued progress will certainly take work — improvement in health, education and sanitation resources; increasing access to food, water, and earning opportunities globally — this year's numbers represent a big step toward the World Bank's twin goals of eradicating extreme poverty by 2030 and boosting the income of the world's poorest by 40%.

4. The death penalty fell out of favor nationwide.

The use of capital punishment dropped sharply this year, according to the Death Penalty Information Center. Its annual report says that 2015 saw 28 executions — the fewest since 1991. New sentences are also at a low point — their lowest, in fact, since 1973. This is due in no small part to the changing national attitude on criminal punishment: According to the report, most Americans now prefer a life sentence to a death sentence, a trend the Washington Post links to the country's move away from tough-on-crime policies.

"I believe this moment can be a turning point for the world," said President Barack Obama of 2015's historic climate change agreement, which the United Nations reached in Paris after weeks of negotiations this December. The plan aims to keep global warming below 2 degrees Celsius, and to "undertake rapid reductions" in global carbon emissions.

The countries involved have committed to reviewing their progress every five years, and to spending a cumulative $100 billion on climate annually, with the understanding that developing countries — where fossil fuels are the go-to energy source — will need time and support to achieve these goals. And while the deal doesn't mean that the climate change crisis has been averted, it is a huge step in the right direction and a point of pride for 2015.

In 2015, Viola Davis won an Emmy for her role in How to Get Away with Murder, making her the first African American woman to win an Emmy in the best actress in a drama category. "The only thing that separates women of color from anyone else is opportunity," Davis said in her acceptance speech. "You cannot win an Emmy for roles that are simply not there."

Davis called attention to the continued existence of a whites-only media industry, and while the imbalance is far from being corrected, the months since September's Emmy night have seen an NBC broadcast of The Wiz! Live, featuring an all-black cast, and Noma Dumezweni cast as Hermione Granger in Harry Potter and the Cursed Child. We still have a long way to go, but in 2015, the world was reminded that #RepresentationMatters.

2015 was the year in which women talked openly about their periods, called out their catcallers, gained currency with the U.S. Treasury, fought back against unrealistic beauty standards, made headway with feminist foreign policy, won the right to vote and to hold public office in Saudi Arabia, joined the race for president and woke up to the problem with white feminism. Muslim women exercised their right to worship freely, to make a hijab "more fashionable" or not to wear one at all. First lady Michelle Obama launched her #62MillionGirls campaign, while actresses Jennifer Lawrence and Emma Watson called attention to persistent sexism in Hollywood.

8. California stood up to racial slurs.

In October, California Gov. Jerry Brown placed the term "Redskins" out-of-bounds for the state's public schools. Native Americans have long maligned the label as a racial slur, yet it remains an all-too popular choice for school mascots and national sports teams. Some schools have stricken the word from their lexicons, but California was the first to do so statewide, setting what we hope will be a precedent for 2016.

9. South Carolina took down the banner of the Old South.

The Confederate battle flag had flown over South Carolina's capitol building for 54 years, the operative word being "had": In July, the state legislature passed a bill calling for the flag's removal after nine people were gunned down by a white supremacist while praying in a historic black church in Charleston, its second-largest city. The decision took longer than many believed it should have: Activist Bree Newsome grew so frustrated with the legislature's failure to remove the flag — which she called "the banner of racial intimidation and fear" — that she climbed the building and pulled it down herself, two weeks prior to its formal removal.

10. Mark Zuckerberg showed us he has a heart.

Following his 2010 donation of $100 million to the school system in Newark, New Jersey — widely viewed as well-intentioned but ineffective — Facebook CEO Mark Zuckerberg made a surprising pledge in a letter to his newborn daughter, Maxima Chan Zuckerberg. The Facebook founder and his wife vowed to donate 99% of their company shares to charitable causes "during our lifetime," which, as the New York Times reported, comes to some $45 billion. And while critics called the donation self-serving, noting that Zuckerberg would be routing the money through his own LLC foundation, Zuckerberg promises that the donation won't be used as a tax incentive, according to CBS. Regardless, Zuck seems to have deemed 2015 a good year in which to support his community.

In 2015, Khan Academy and the College Board partnered to offer a free online prep course for the SAT, something that's traditionally been seen as a luxury benefiting kids who need it the least. The test, which helps decide where applicants attend college, has tended to divide down racial and socioeconomic lines. The privilege gap came to the attention of the U.S. Department of Education in 2012, when New York educators and activists complained that standardized testing violates the 1964 Civil Rights Act.

Here's hoping that open access to practice resources can start to close what the Atlantic identifies as "a 400-point gap between the highest- and lowest-income students."