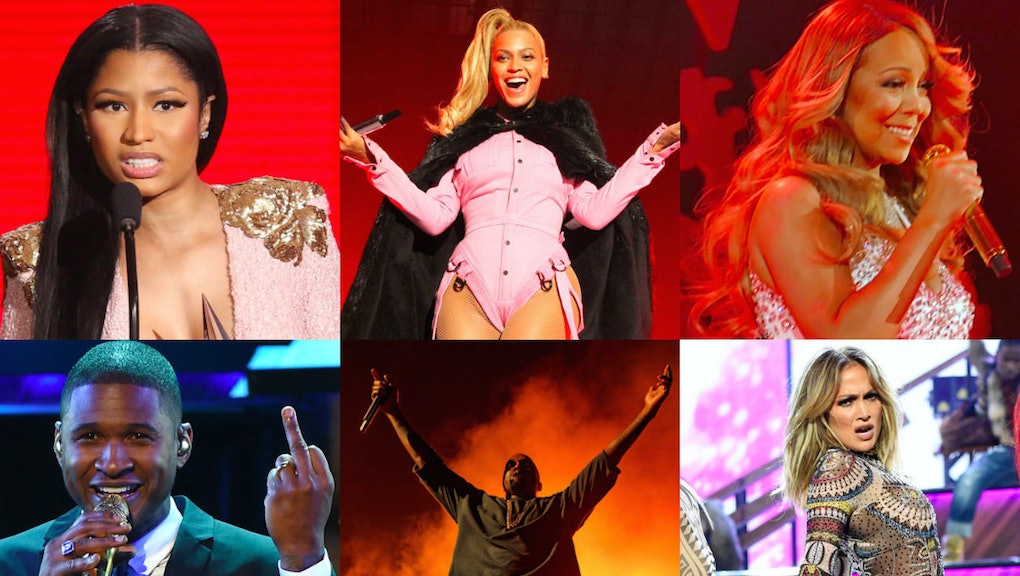 Nicki Minaj, Beyoncé, Usher Among Artists Who Have Performed For Dictators

Nicki Minaj reportedly earned a cool $2 million off her recent performance in Angola, despite several international agencies including the Human Rights Foundation begging her to cancel the show due to President José Eduardo dos Santos' history of repressive governing. She proudly wrapped herself in the nation's flag in one Instagram post, and captioned another "GIRL POWER!" while standing next to dos Santos' daughter Isabel. The dos Santos family partially owns Unitel, the company that sponsored the Christmas festival concert, and has ruled over the country with an iron fist for over 35 years.

However, Minaj isn't the first performer to take the stage in front of a dictator or their family. Moreover, if her backlash from the event follows the same trajectory in the media as similar controversies, her Angola concert will be old news by next week. Plenty of other artists have performed in recent years for some of the most oppressive regimes, including Beyoncé, Mariah Carey and Kanye West — just to name a few.

Think your favorite artist cared about where the check was coming from? Think again. Here are some of the biggest names in the music industry who have performed for some of the world's worst dictators:

1. Mariah Carey was reportedly paid $1 million in 2009 to sing four songs in St. Barts for Libyan dictator Col. Moammar Gadhafi's son, as Gadhafi was ravaging the nation in bloodshed to maintain his power.

2. The following year, Beyoncé and Usher visited St. Barts for a New Year's Eve bash, performing for the dictator's son Muatassim, who is his father's national security advisor.

3. Kanye West received $3 million for his performance at the wedding of Kazakhstan President Nursultan Nazarbayev's grandson. The Human Rights Foundation described the nation under Nazarbayev's rule as "a human rights wasteland," in a statement according to NPR, but that didn't stop West from attending the exclusive event.

4. Jennifer Lopez sang to Turkmenistan President Gurbanguly Berdymukhamedov for his birthday in 2013. "What is the next stop on her tour, Syria?" asked Human Rights Foundation president Thor Halvorssen in a statement following the performance, according to Los Angeles Times. Lopez has since apologized, saying she was unaware of the atrocities in Turkmenistan.