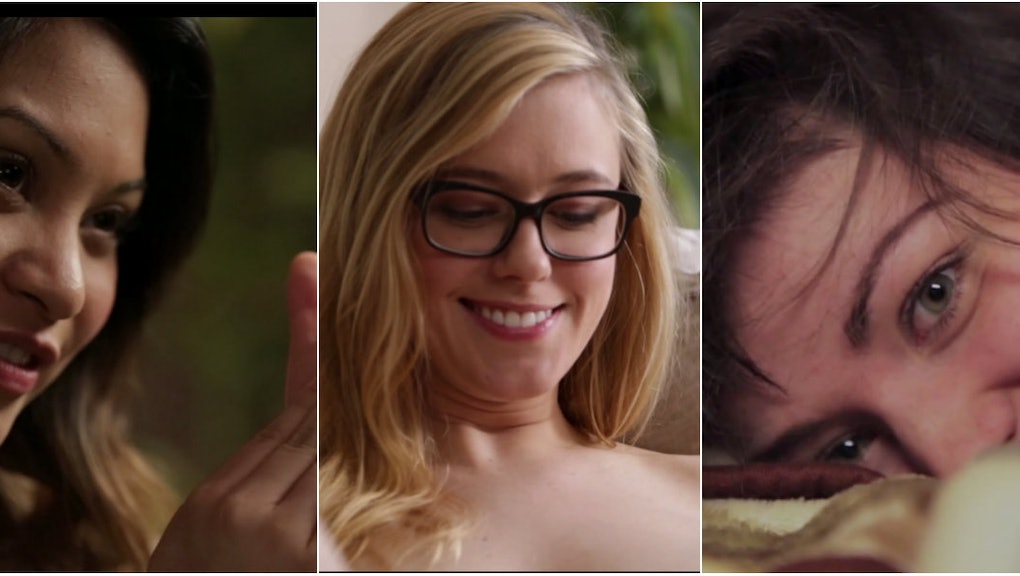 It's well-established that 2015 has been the year of the female orgasm. With celebrities like Amy Schumer and Nicki Minaj speaking out why women should demand sexual satisfaction and the launch of the How to Make Me Come Tumblr providing a "user manual" to the clitoris, the female orgasm has stepped into the forefront of the cultural conversation.

But that doesn't mean we don't still have work to do. According to a 2015 Cosmopolitan survey, only 57% of women have orgasms when they're having sex with a partner, suggesting the orgasm gap is still alive and well.

A new website, however, is working hard to close that gap. OMGYES, an online orgasm training program, enlists the help of real women to demonstrate exactly how they make themselves come, using a wide variety of specific techniques. Users can also replicate the exact motions used to bring the women onscreen to orgasm via an interactive touchscreen, providing real-time feedback during what is essentially a crash course in female sexual pleasure.

The website essentially aims to be "the Joy of Sex for a new generation," Rob Perkins, the cofounder of OMGYes, told Mic.

Users can also replicate the exact motions used to bring the women onscreen to orgasm via an interactive touchscreen, providing real-time feedback during what is essentially a crash course in female sexual pleasure.

Perkins came up with the idea for the website with his friend Lydia Daniller about four years ago, during a conversation they were having with friends about the elusive female orgasm.

"We're experiencing something of a hangover from our previous generation, where it's still hard for people to see women as sexual beings on their own," Daniller said. "It's fairly new that women are seen as having their own desires."

To find out what, precisely, gets women off, Perkins and Daniller arranged video chat interviews with hundreds of women about their self-pleasure techniques, 30 of whom ultimately elected to demonstrate their favorite techniques on camera. They also teamed up with sex researchers Debby Herbenick and Brian Dodge of Indiana University to poll more than 1,000 women between the ages of 18 and 95 about how they give themselves orgasms.

The result is an insanely detailed lexicon of various terms and techniques, which are demonstrated in painstaking detail on the website — some of which, the site's founders say, didn't even have names beforehand. Some of these tips and techniques are fairly self-evident — for instance, many women reported that consistency of pressure and rhythm on the clitoris helped them achieve orgasm. Others are slightly more abstract. (Ladies, even if you haven't heard of "edging," a technique used to delay orgasm, you've probably done it at one point or another without knowing it.)

By arranging the most common techniques in a sort of taxonomy of female pleasure, Perkins said the site wants to give women a more comprehensive vocabulary to express their desires in bed.

"Today there's a lot of 'I like that thing you did. Can you do that thing?'" Perkins told Mic. "But there aren't words for the specifics about women's pleasure. There's Urban Dictionary on one hand, and gynecologists' clinical terms on the other."

According to Perkins and Daniller, there were also a few common themes that kept popping up. Approximately 65.5% of women said edging, a technique used to delay orgasm, resulted in more intense, longer orgasms for them. 73% and 71% of women said they enjoyed "hinting" the vaginal opening and the clitoris, respectively, during foreplay or avoiding direct stimulation of those areas to build more powerful and intense orgasms. ("I like to be teased a lot, touching everything but my vulva," one woman says.)

And perhaps surprisingly, a large number of women — nearly 48% — were capable of having multiple orgasms.

The researchers are careful to note that women's bodies are vastly different, and that no one woman prefers the same technique at all times. But by giving women and their partners the tools — physical and verbal — for orgasm, they hope to shed light on the myth that the vulva is an enigma, shrouded in mystery and impossible to decipher.

The female body, says Daniller, "isn't unknowable. It's nuanced and mysterious and fascinating, but it's not unknowable."