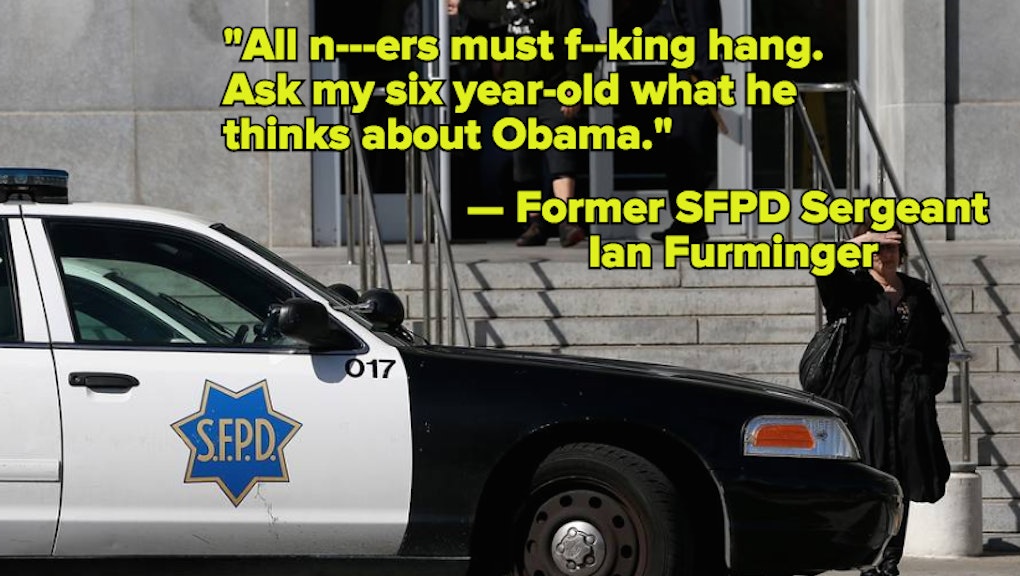 After several San Francisco cops exchanged racist text messages in 2012, calling African-Americans "monkeys" among other offensive dialogue, a Superior Court judge ruled Monday that the officers won't face consequences because the charges were filed past the statute of limitations, the San Francisco Chronicle reported.

"It is not in the public interest to let police misconduct charges languish," Judge Ernest Goldsmith said in his ruling on Monday. "The public has a right to have accusations against police officers be promptly adjudicated."

City and police officials are outraged at the decision and plan to appeal it. "For this judge to say he's thinking of the interest of the public — is the public expected to go on with their business and pretend nothing ever happened?" Sgt. Yulanda Williams, president of Officers for Justice, a nonprofit organization that seeks equal rights and treatment of nonwhite San Francisco police officers, told the Chronicle.

"The citizens are still in a situation where they're questioning whether or not they should embrace law enforcement or fear them," Williams said. "That's wrong. We need to stop sweeping things under the carpet and deal with it."

"Get ur pocket gun," one of the text messages said, according to the San Francisco Gate. "Keep it available in case the monkey returns to his roots. Its not against the law to put an animal down." The text messages also included discussion of  killing "the half-breeds" and referred to Williams as "n---a bitch," according to the Chronicle. Some of the officers involved include Sgt. Ian Furminger, Capt. Jason Fox, Sgt. Michael Wilbunsin, Officer Sean Doherty, Officer Richard Ruiz and Officer Angel Lozano.

"N---ers should be spayed." Furminger wrote in one of the texts. "I saw one an hour ago with four kids."

"All n---ers must f--king hang." he wrote in another message. "Ask my six year-old what he thinks about [president] Obama."

A complete document of the text exchanges can be found here.

The series of texts first came to light earlier this year during a federal investigation on Furminger, who was convicted of corruption in February for pocketing items confiscated during a 2009 arrest, the Washington Post reported. Furminger was formerly known as a heroic officer and received the department's Gold Medal for Valor in 2000.

"The fact that San Francisco is forced to retain police officers that demonstrated explicit racism will have ramifications for the reputation of the department, the fair administration of justice and the trust of the community SFPD serves," District Attorney George Gascón told the Chronicle.

Three of the accused cops resigned earlier this year after Police Chief Greg Suhr called to fire them — but one of them, Michael Celis, requested and was granted his job back with no consequence after he learned the charges were made past the one-year statute of limitation. The officer's defense said the department discovered the texts in 2012 and failed to take action until 2015.

Suhr told the Chronicle after the ruling that he's confident in the timeliness of his actions and that the department will work to bring justice to the case. "We're confident in our position that we acted in a timely fashion and that the criminal case appropriately took precedent," Suhr said. "Anybody capable of the reprehensive texts that these guys sent should not be police officers, and we will work for that to be the case."