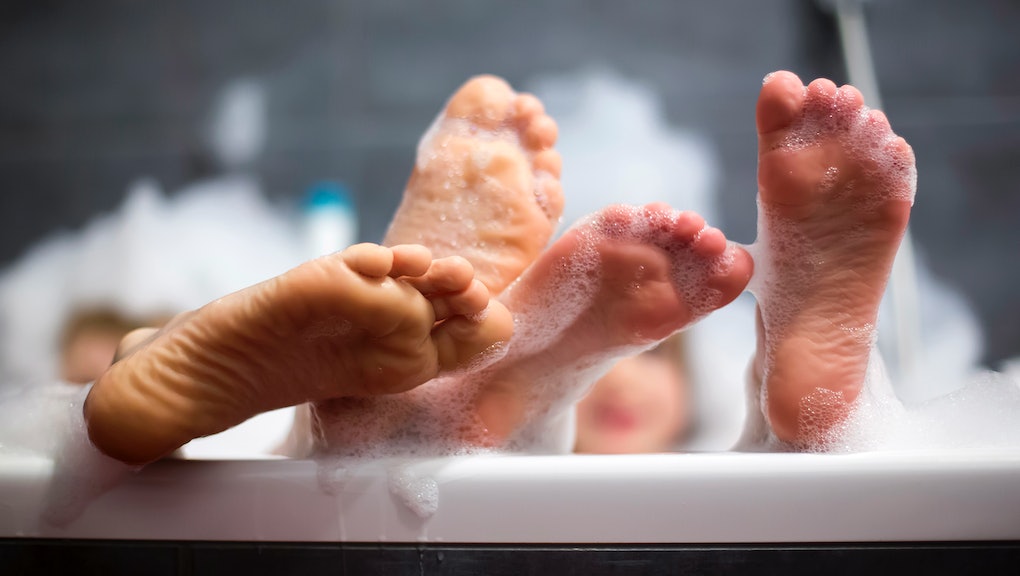 Rub-a-dub-dub, three men one man and his tiny little daughter in a tub. The 2015 version of the classic nursery rhyme, though, doesn't end with the tub sailing out to sea. It ends with the Internet freaking out.

While the original image has since been deleted, the Sun reports that Chris posted the photo with a caption explaining (in Danish) that he shared it as a gesture of solidarity for some of his friends, dads who have also been heavily criticized for being naked in front of their young children. One of them, he wrote, had "been accused of pedophilia by a stranger because he bathed with his two-year-old daughter."

So Chris decided to post his own bath time photo in protest.

"Listen," he wrote. "Children and adults can be naked together. There is nothing wrong with a father who washes his daughter's bottom and vagina when she's a child. On the contrary, it is bloody disgusting if nobody does it, and unfair if only the mother does it."

The post garnered more than 56,000 likes, along with more than a few comments of the "THIS IS AN ABOMINATION" variety. "Put on some underwear my friend," said one user. "What good will your daughter get from seeing your genitals?"

"You're sitting there with your legs spread out in front of a two-year-old girl," wrote another. "Doesn't it feel wrong?? Was there not a single time where it felt wrong for the child?? Who on earth says your daughter wants to see you like this?? Poor child!!!"

Last week, Chris decided to address the controversy with a Facebook video, in which he said that the negative comments got far more attention than the positive comments that outnumbered them.

"The wide majority of people were on my side," he said. "Of course, there was a little number of people who were really, really upset by the picture, but who gives a shit about them? That's the weird thing about this whole debate. [...] Somehow the people who are most scared of nudity got the upper hand."

He later reiterated his pro-nudity stance.

Of course, in the debate over whether or not it's OK to be naked in front of your kids, no one is actually "right." When CNN's Kelly Wallace attempted to settle this debate last year, for instance, she found that parents had a wide range of opinions.

"I don't think it makes them terrible people or scars them for life if they stumble into the bathroom while I'm going, but it's easily avoidable awkwardness none of us really needs to experience on a daily basis," said one mom who stopped being naked in front of her sons around the time they turned five.

Meanwhile, on Instagram, parents who've posted toddler bath time photos have been criticized, due to the risk of the photos potentially ending up in the hands of an actual pedophile. Even actress Olivia Wilde received social media backlash earlier this month, after she posted an Instagram photo of her 19-month old son Otis naked in a cowboy hat.

So, yeah. Use your judgment and #FollowYourHeart when bathing and/or posing for photos with your li'l tykes. And if do choose to get naked with your child and post a pic of it online, probably don't read the comments.