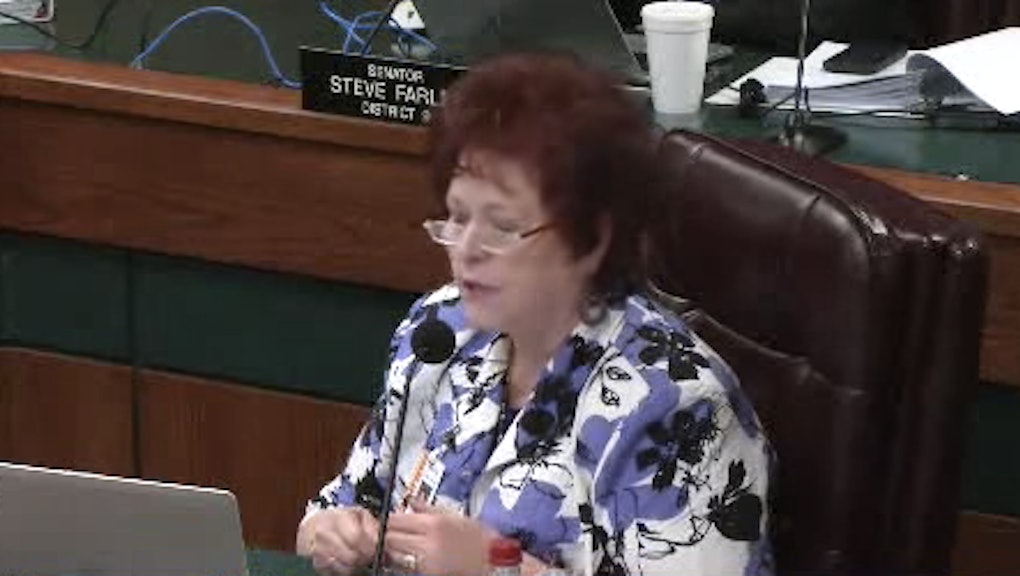 Arizona Senate President Andy Biggs on Tuesday appointed Sen. Sylvia Allen as the new chairwoman of the state's Senate Education Committee. And what better role for Allen, who has been building her credentials for years with bizarre statements on chemtrails and a fervent belief in creationism, than leader of an education-focused body?

According to the Arizona Republic, the senator first rose to national attention in 2009 when she stated in a video clip, "(The Earth) has been here 6,000 years, long before anybody had environmental laws, and somehow it hasn't been done away with," espousing the common creationist idea of a young earth — and rebuffing environmentalist concerns.

She almost managed to sneak under the radar when she wrote on Facebook about her chemtrail conspiracy theories in 2013. In a status, Allen wrote, "I have watched the chemtrails move out until the entire sky is covered with flimsy, thin cloud cover. It is not the regular exhaust coming from the plane it is something they are spraying."

Allen also waxed nostalgic earlier this year when she suggested it be mandatory for everyone to attend church, stating during a hearing, "I remember on Sundays the stores were closed. The biggest thing is religion was kicked out of our public places, out of our schools."

Allen did not respond to Mic's request for comment.

As chairwoman, Allen would be in charge of deciding which bills get pushed through to the Senate floor and which never make it past the Education Committee. Allen recently acted as a primary sponsor for a bill requiring students to pass a civics test in order to graduate, according to her membership page.

For those who find it concerning that a person with such beliefs be put in this position of power, it's worth considering a similar situation on the national scale. When former representative Todd Akin made his infamous comments on "legitimate rape" in 2012, he demonstrated not only his party's sexism, but also his own ignorance about basic biological functions. Naturally, Akin sat on the House Committee on Science, Space and Technology. Former Republican representative Paul Broun was a member of the same committee, and he made the following remarks at a church banquet: "All that stuff I was taught about evolution, embryology, Big Bang theory, all that is lies straight from the pit of hell."

As for Allen, her Democratic colleague Sen. Steve Farley said people shouldn't worry too much. In fact, he told the Arizona Republic he thinks she'll do a good job. He stated, "She's made some interesting comments to the public, but it's not like she's going to be teaching," he said. "We have accredited teachers for that."