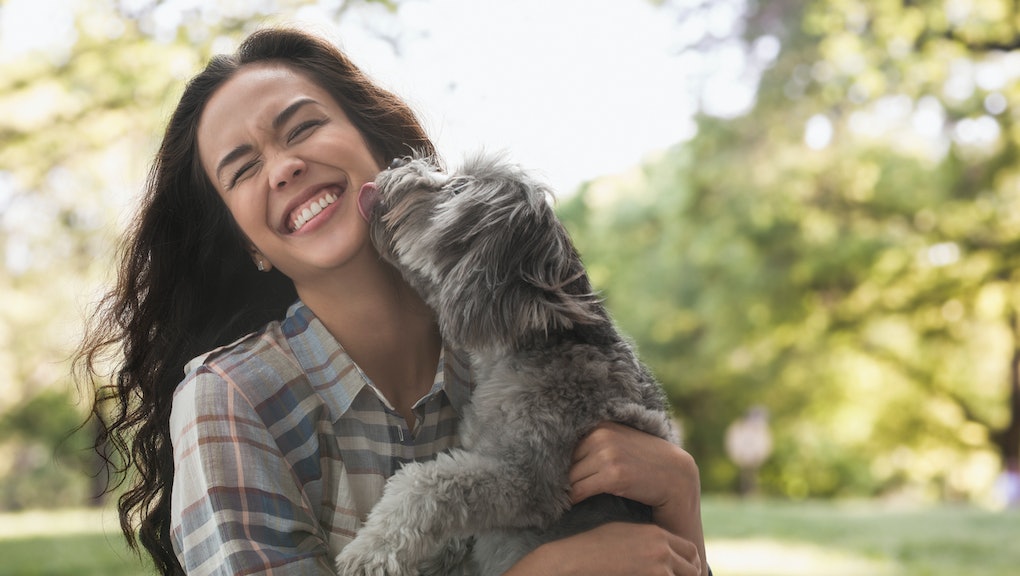 People form bonds by replicating one another's emotions. We smile when our friends are happy and frown when they're feeling bummed. Turns out, dogs might do the exact same thing.

Canines are capable of instantly copying expressions as well — a process known as "rapid mimicry," a recent study has found. What's more, it's yet another sign that dogs are hardwired to feel empathy.

Humans engage in rapid mimicry, too. It helps us get along and bond with other people. When our friends are really excited about something, we tend to quickly replicate that excitement in our own faces and bodies. Eventually, we even share in their feelings — a process known as "emotional contagion," which is a basic form of empathy.

In what sounds like the most fun science experiment of all time, researchers in Italy filmed dogs playing together at a dog park, collecting a total of 50 hours of footage. They then analyzed each individual "play session," noting the dogs' tendencies to mimic certain playful behaviors: bowing and relaxing their mouths.

An average of 77% of dogs exhibited a "high level of rapid mimicry," the researchers found. And, just like in humans, that rapid mimicry seemed to help the dogs strengthen their relationships. Play sessions with at least one instance of body and facial rapid mimicry were "significantly longer" than those in which the dogs failed to copy one another's expressions.

"Being involved in prolonged interaction is advantageous for the playmates, who increase the opportunity to assess their reciprocal ability and to test their social relationships," the researchers wrote.

Dogs that were "friends" — who either lived together or played at least three times a week — were found to have the highest levels of rapid mimicry. That makes sense: "In both humans and animals," the authors wrote, "mimicry is biased towards individuals who are more similar, familiar or socially close."

This isn't the only proof of dogs' empathetic abilities — not just with other dogs, but with humans too. This 2011 study found that dogs are capable of emotional contagion and cognitive processing of humans' emotional states, and this one, from 2001, found that dogs are more playful when responding to physical "play signals" from humans. Thanks to brain scans, we also know dogs definitely love us back.

The researchers' next step is investigating rapid mimicry in wolves, they wrote, "to evaluate if the phenomenon in dogs has been shaped by the domestication process or is evolutionarily rooted in the line of social carnivores."