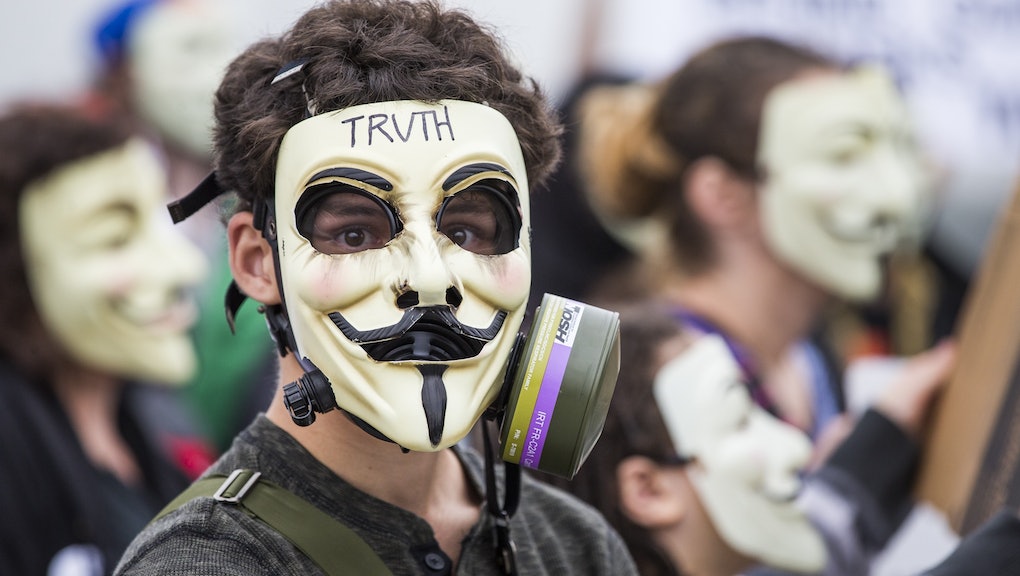 The anarchic online collective Anonymous has a new target for its latest round of cyber warfare: the Turkish government.

As part of its ongoing #OpISIS campaign against the Islamic State group, a terrorist organization that launched devastating attacks in Paris in November and has taken over large stretches of Iraq and Syria, Anonymous — or people who claim to represent it — said it is launching attacks on Turkish websites and social media accounts because of shady oil deals between the Turkish government and ISIS, also known as Daesh and ISIL.

"Turkey is supporting Daesh by buying oil from them, and hospitalizing their fighters. We won't accept that [Recep Tayyip] Erdogan, the leader of Turkey, will help [ISIL] any longer," says a video message from the group, according to Hurriyet Daily News. "We will continue attacking your internet, your root DNS, your banks and take your government sites down. After the root DNS, we will start to hit your airports, military assets and private state connections. We will destroy your critical banking infrastructure."

The hackers say they're behind a distributed denial of service attack that took down several government websites in Turkey between Dec. 14 and Monday, according to the International Business Times. The attack is widely believed to be linked to Russian leader Vladimir Putin, who is still fuming after Turkish forces shot down a Russian warplane on an anti-ISIS mission last month, Hurriyet reported.

In response, Putin has formally accused Turkey of buying ISIS' oil, leading to a diplomatic standoff between the two countries.

There's just one problem: Experts on the region say the idea that Turkey is willingly supporting ISIS with black-market oil purchases is essentially a conspiracy theory.

While oil produced in ISIS territory has made its way to Turkey, it has also made its way to many places across the region, as smuggled products tend to do, and the scale of the trade is relatively tiny and likely involves no official collusion by high-ranking officials.

According to David Butter, of the London-based think tank Chatham House, through the first half of the year, ISIS-controlled oil fields were generating 30,000 to 40,000 barrels of oil a day.

"The quality of the products was poor, but many buyers, particularly those in rebel-controlled areas, had little other option, and typically paid a heavy premium over international prices," Butter wrote. "ISIS profited from the well-head sales, as well as from taxes along the supply chain."

Butter writes that when an international coalition led by the United States as well as a separate coalition led by the Russian government, the oil business was hit hard — and it had already suffered a price collapse in 2014, making the Syria-Turkey smuggling business less profitable. Meanwhile, he noted, Turkey actually gets 56% of its oil from Russia.

Fawaz Gerges, London School of Economics professor of international relations, tells Time "it would be very misleading to say there is an unholy alliance with Turkey and the Islamic State."

"ISIS sells to anyone, it's not about ideology," he said. "They deal with the Kurds, Syrian regime, Islamist rivals. It's just business."

But Gerges did point out Turkey's "unofficial" open-border policy with Syria has enraged many, as the long border between the two countries has allowed foreign fighters to slip into Syria unmolested.

The problem there is not that Turkey's ruling Justice and Development Party considers ISIS an ally, but that it hates the Syrian government run by autocrat Bashar al-Assad even more. Turkey is also more concerned with Kurdish rebels that have gained a stronghold in Assad's splintered country than it is ISIS, having fought a bloody, decadeslong war with them.

So the AKP thinks getting Assad out is the only way to stabilize the country — and while it's been less concerned with fighting ISIS, that's hardly the same thing as a secret pro-ISIS conspiracy.

Russia, on the other hand, is enthusiastically backing Assad, a dictator whose forces are committing some of the most disgusting war crimes of the 21st century. Russia would like to put down all opposition to Assad's authoritarian regime.

It's a complicated war of shifting, cynical interests, which might explain why Anonymous is buying wholesale into a significantly less-complicated conspiracy theory with a convenient villain — Erdogan, whom the group has opposed before.

Anonymous' attack on Turkey is thus like much of the rest of its "hacktivism": highly entertaining, but incoherent, misdirected and almost certainly ineffective. Backing Russian propaganda is also a curious choice for a movement that claims to be a grassroots rebellion against the world's shadowy power brokers.