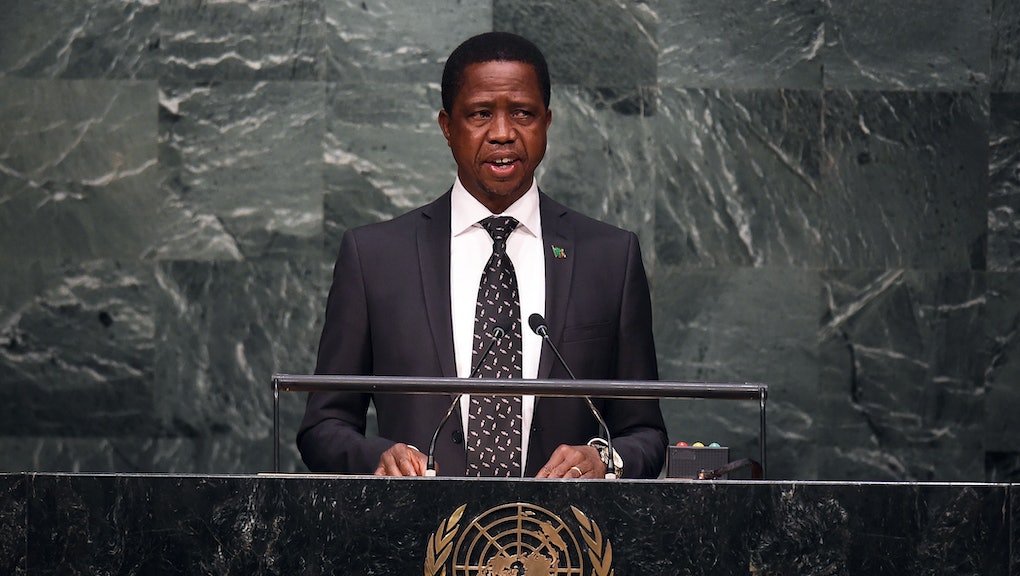 United Nations experts are denouncing Zambia's President Edgar Lungu for his appointment of a convicted child rapist as an "ambassador in the fight against gender-based violence," BuzzFeed reports.

The man in question is local music star Clifford Dimba, who uses the stage name General Kanene. Dimba earned a presidential pardon in July, just one year into his 15-year sentence, after he wrote a flattering song about Lungu from jail.

Mere days after he was released from prison, according to BuzzFeed, local media reported Dimba beat one of his four wives for refusing him sex — and the woman later went missing. Dimba also allegedly beat another woman months later, saying she was a prostitute looking to exploit him for money.

"Such an outrageous release and appointment as an ambassador for the fight against gender-based violence not only traumatizes the victim all over again but discourages other victims from reporting similar offenses," U.N. Special Rapporteur on violence against women Dubravka Šimonovi? said in the statement.

"The pardon and appointment undermine the strong message against sexual abuse of women and girls that was sent with the original sentence and trivialise the serious nature of these offences," she continued. "Rather, Clifford Dimba has been placed in a prominent position and even portrayed as a role model to fight violence against women."

U.N. Special Rapporteur on child trafficking, prostitution and pornography Maud de Boer-Buquicchio said Dimba's appointment "constitutes an utter disrespect for women and girls in Zambia who might rightly feel that their Government is not protecting them. The pardon has meant impunity for an abhorrent crime and his subsequent appointment as ambassador for the fight against such violence is more than cynical and adds insult to injury for the victim."

Zambia has a "reputation as a stable democracy due to successful successions of power and a prior history of a respectable human rights record," but has seen an "increasingly troubling pattern of repression" since Lungu's predecessor and fellow Patriotic Front member Michael Sata took power in 2011, according to Amnesty International. However, Amnesty has also praised Lungu's decision to commute the death sentences of 332 prisoners.

Lungu has been president since January, replacing Sata as the party's candidate after the latter's death in October 2014.

While gender-based violence in Zambia is widespread, a study conducted in 2013 concluded social attitudes in the country were rapidly turning against tolerance of abuse.

According to the Associated Press, some locals believe that Lungu intended to force Dimba to clean up his act but the plan has backfired.

"The appointment was well intended but Kanene is abusing it now," Zambian Sindy Phiri told the news agency. "I think the ambassador position needs to be withdrawn immediately and let justice prevail."