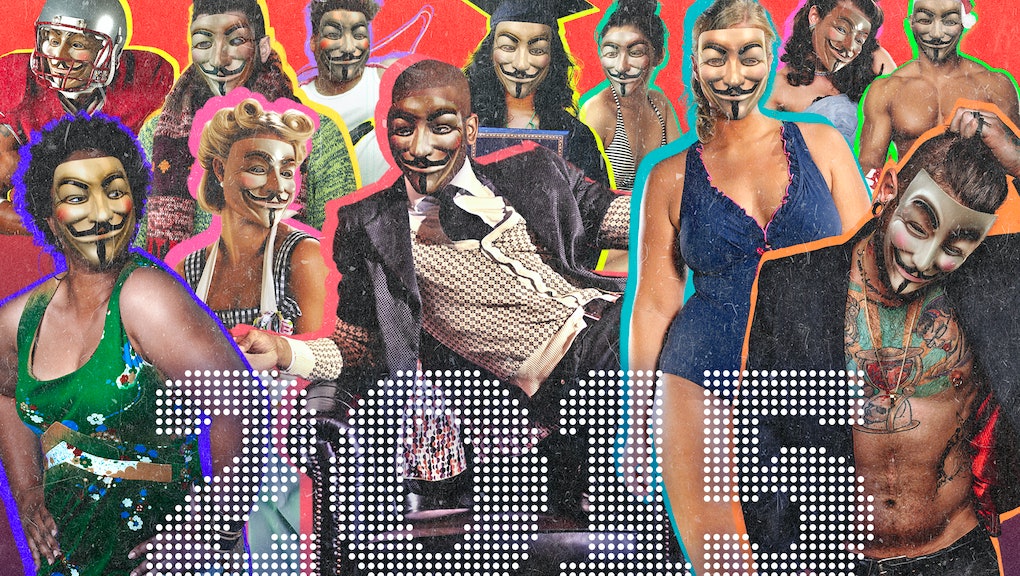 The Year in Anonymous: Everything Your Favorite Hacktivists Accomplished in 2015

It's been almost eight years since Anonymous first came to prominence for declaring war on the Church of Scientology. And while the large, loose, amorphous collective may not be the small, focused band of talented hackers they once were, Anonymous is still alive and kicking in 2015.

There were the big ops — big, sweeping declarations of war marked by viral videos and hashtags bent on "destroying" some organization or another — as well as rogue splinter members and groups who created smaller moments of mischief. There was outrage, there was infighting. You expected Anonymous, and Anonymous delivered. Sort of.

Here's our year-end roundup of the masked mischief that made headlines in 2015:

The year kicked off with grisly news. On Jan. 7, jihadists stormed the offices of satirical French newspaper Charlie Hebdo and killed 12 people. Anonymous hit back with a scathing video only days later, vowing to scrub the social media accounts and websites of al-Qaida and ISIS off of the internet.

In the subsequent weeks, the Anonymous members most concerned with ISIS, or the Islamic State group, took down almost 100 ISIS accounts before regrouping to take on jihadists as a whole, which leads us to...

The disparate hackers and activists who rallied together around #OpCharlieHebdo eventually expanded their reach to focus on ISIS, rebranding themselves under names like GhostSec and CtrlSec.

"The terrorists that are calling themselves Islamic State are not Muslims," Anonymous said in a follow-up video to their first bouts of social media takedowns. "ISIS, we will hunt you, take down your sites, accounts, emails and expose you. From now on, no safe place for you online. You will be treated like a virus and we are the cure. We own the internet."

For the months following, the small corp of dedicated anons continued relentlessly documenting , reporting and attacking ISIS social media accounts and forums on the Dark Web, a collection of publicly accessible websites whose ownership is obscured. After the post-Charlie Hebdo attention died down, much of this work was done without media attention. That would change when Paris was attacked. (More on that later.)

The Daily Dot, online chronicle of internet culture, has been aggressively covering the actions of Anonymous since 2011. Though Anonymous loves winning media mentions and, as a matter of popular practice, doesn't go after journalists or try to silence speech, some vocal supporters were quick to turn on Dot reporters when they hired FBI informant Hector "Sabu" Monsegur to review Blackhat and CSI: Cyber.

Sabu is one of the most visible and notorious FBI hacking informants of all time. "No one is more qualified to discuss the realism of a show about a hacker informant than the world's most notorious hacker informant," Daily Dot managing editor Austin Powell wrote in a follow-up.

Nevertheless, Anonymous went into full attack mode, drumming up new memes and bizarre, false rumors — one being that Monsegur was on a six-figure consulting retainer — to discredit the Dot .

Anonymous claimed it was successful in getting some people to stop following @dailydot on Twitter. Otherwise, the site remains unfazed.

Local governments and police departments take a lot of heat from Anonymous when they slip up, largely because Anonymous is fundamentally anti-authoritarian, and largely because public websites are flimsy and easy to take down or hack.

After an incident where police in San Bernardino, California, were caught on video brutally beating someone suspected of identity theft, anons struck back at what they perceived as systemic police brutality, defacing the site with its own logo along with the classic internet shock image Goatse (Google that at your own peril).

The Madison shooting of Tony Robinson

On March 6 in Madison, Wisconsin, police officer Matt Kenny entered the home of biracial teenager Tony Robinson, shooting and killing him. After there were no charges filed against Kenny, Anonymous took up the cause.

A now-removed message reportedly posted on the site Pastebin addresses the "citizens of Madison and Madison Police Department," calling them "cocksuckers" and calling on "all allied battleships, all armies from darkness, to use [...] this mighty fine list to wreak unholy havok upon the buggy roaches of the city" [sic].

The anons ended up doxxing 38 members of the police department, and called for further protests against the Madison police.

Outrage spilled over after police in McKinney, Texas, rounded up, arrested and abused a group of black teens at a pool party. A handful of anons launched #OpMcKinney in response, putting out a $200 bounty for identifying information for people shown in the viral video that documented the brutality.

"We want accountability," a member of the op told Mic at the time. "We want the authority figures depicted [in the video] to step up and take responsibility for their despicable behavior."

The anons doxxed the home address of Corporal Eric Casebolt, notorious for the video that emerged of him grabbing a black teenager by her hair and throwing her to the ground. Casebolt has since claimed that he's the "real victim" of the McKinney incident.

Technically, #OpDeathEaters was year round. This campaign didn't capture public attention so much, occupying instead a dark and conspiratorial corner of the anon world. #OpDeathEaters is, put simply, a conspiracy theory with dedicated and vigilant curators who believe that the U.K. — and, in some cases, the Western world — is run by a global network of sexual sadists who trade children in international trafficking rings.

On one hand, Anonymous has a few points in which it's dead-on. There have, in fact, been cover-ups and high-level conspiracies to conceal organized pedophilia at the highest levels of British government. On the other hand, the anons interested in the cause have lofty goals (namely: exposing and eliminating these governments entirely) and some outlandish claims about the new world order.

To support anti-corruption demonstrations against the Malaysian government, a rogue splinter group of anons posted an eight-minute video claiming that they were going to begin an online assault on 150 government web portals until the prime minister was forced to resign.

In response, another group claiming to represent Anonymous in Malaysia responded by saying that those attacks had nothing to do with Anonymous — a perfectly ludicrous thing to say about a group that defines itself by being an amorphous identity that can be assumed by anyone willing to don the mask.

The crucifixion of Ali Mohammed al-Nimr

Saudi Arabia executes more than 100 people each year, but one conviction particularly brought the scorn of international rights groups: the planned death by crucifixion of 17-year-old Ali Mohammed al-Nimr for alleged political protest and possession of weapons. While there's not much Anonymous can do about beheadings on the other side of the world, they were successful in taking down Saudi government websites, including the site for the Saudi Ministry of Justice, and bringing extra press attention to the case.

In October, British Secretary of State for Foreign Affairs Philip Hammond said that he was informed by Saudi interlocutors that al-Nimr would not be executed by the Saudi Arabian government.

If there's anything Anonymous hates more than censorship and law enforcement, it's a hate group who uses the internet as a propaganda dissemination tool. So for the anniversary of the Ferguson protests, Anonymous swore to release the names of 1,000 members of the Ku Klux Klan.

The big problem: Since Anonymous has lost most of its hard, true hacking talent to splinter groups like Lizard Squad in the last few years, their ability to actually infiltrate sites and extract information from secure databases is marginal. The final list of names only had a few hundred alleged KKK members culled from social media and existing databases — and some of the names on the list were already publicly confessed white supremacists.

As the year went on, GhostSec would go on to embed themselves deeply enough with ISIS that they could extract information, identify powerful jihadists and even thwart attacks. They began cooperating with the U.S. government, and Ghost Security Group was born.

For the rest of the year, the prominent hackers from the online counterterrorism efforts of Ghost Security Group and the splintered remnants of GhostSec worked day and night to take down as many as 110,000 Twitter accounts. And though the Group split ties with Anonymous, Anonymous didn't give up the fight.

Trolling Day was a throwback to the heyday of Anonymous, before the mantle was used as a banner to rally the internet's disparate activists toward worldwide causes. Much like in the late 2000s, the group's aim here was to make people who sincerely believe in a cause fundamentally upset and embarrassed.

Heading into 2016, Anonymous is already up to new schemes. Already, it's targeting the government of Turkey over a conspiracy theory and are planning to release critical documents to aid the convict at the heart of Netflix true-crime documentary series Making a Murderer.

So to those who are dreadfully sincere in their racism or authoritarianism — or just those who have an easily guessable password — expect them! Just what you can expect them to accomplish, exactly, remains to be seen.