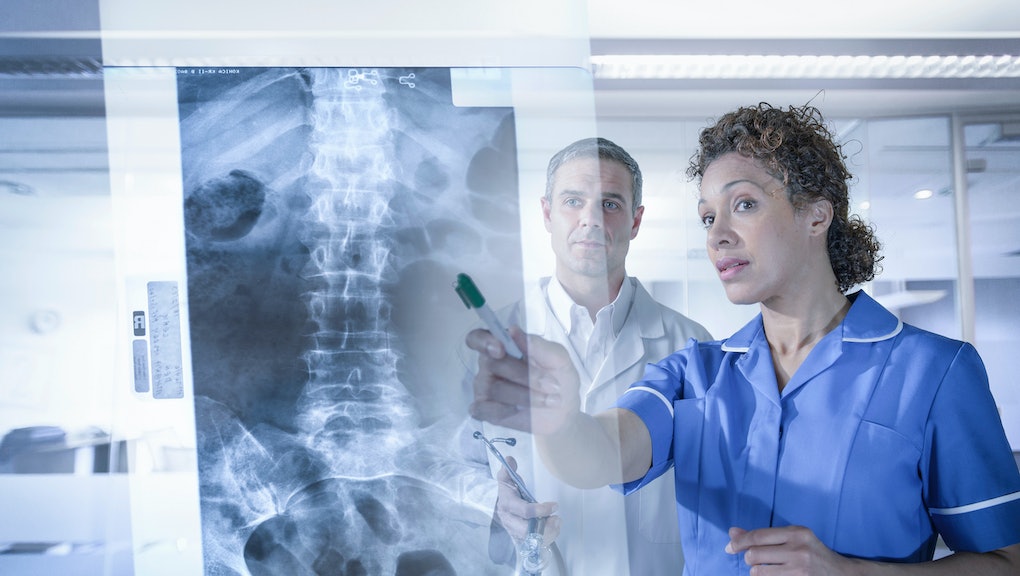 Scientists Created an Injectable Foam That Can Repair Broken Bones

In Harry Potter and the Chamber of Secrets, the inept Professor Gilderoy Lockhart unwittingly magics away every bone in Harry's arm. Harry's bones are then re-grown via an unpleasant-tasting potion called Skele-Gro.

French scientists have created a sort of Skele-Gro for us muggles — an injectable foam that helps repair and regenerate bone. The scientists described their medical breakthrough in a study published in the journal Acta Biomaterialia.

The injectable product is made from calcium phosphate cements, or CPCs — a material commonly used as a bone substitute, according to Chemistry World. The CPCs are macroporous, meaning their pores allow for the flow of nutrients — a key component in bone regeneration.

Here's how scientists improved it: For this most recent attempt at perfecting the injectable bone substitute, scientists added a foaming agent called silanized-hydroxypropyl methylcellulose, or Si-HPMC. It was a success: "The Si-HPMC foamed CPCs demonstrate excellent handling properties such as injectability and cohesion," they wrote.

"Our approach is simple and gives us really good results in terms of mechanical properties and macroporous structures," scientist Pierre Weiss said, according to Chemistry World.

The team tested the product on rabbits, reportedly injecting the product after making small defects in the animals' thigh bones.

The scientists reportedly found no toxic effects, and wrote that they found evidence of "newly formed bone in the central zone of implantation site."

Though they'll still have to run more tests on animals, the team hopes their product can eventually help fight bone disease in humans. "We think this could be a good biomaterial, perhaps with active molecules, to act against osteoporosis locally," Weiss said.

Why these products matter: Osteoporosis is a disease characterized by the loss of bone mass, resulting in bones that are brittle and weak. Around 54 million Americans have osteoporosis and low bone mass, according to the National Osteoporosis Foundation.

During the period from 2005 to 2010, 16.2% of U.S. adults over 65 had osteoporosis at the lumbar spine or femur neck, which is part of the hip, according to statistics provided by the Centers for Disease Control and Prevention.

Osteoporosis is the cause of 2 million broken bones and $19 billion in related costs per year, the National Osteoporosis Foundation estimates.

Some day, a cure could be as easy as the push of syringe.