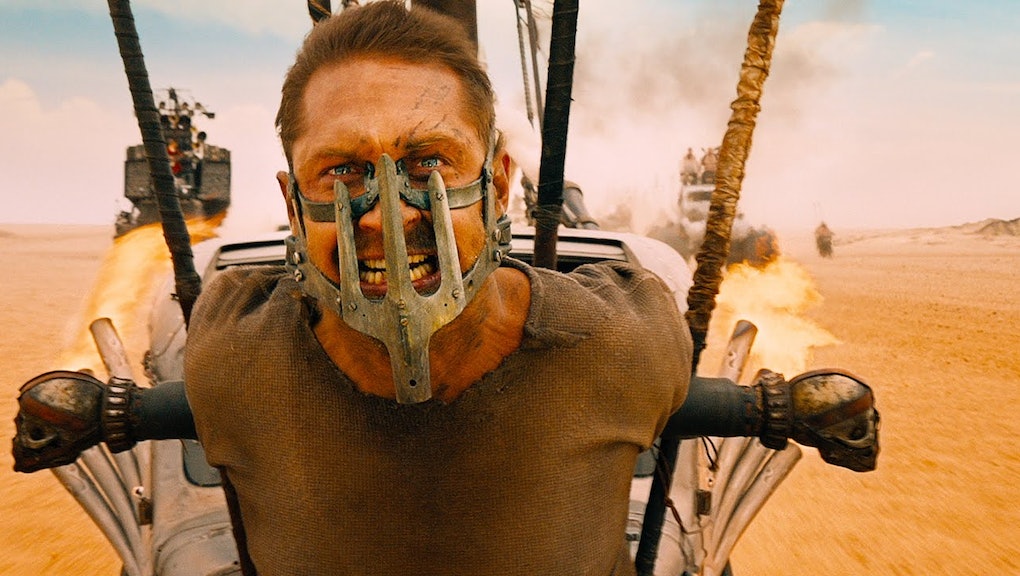 Movies to Eat Takeout To: What to Watch If You're Not Celebrating Christmas

Considering everything else that happened in 2015, Americans may be finding themselves a bit behind on moviegoing this holiday season. Luckily for those who don't celebrate Christmas, this is the perfect occasion to catch up.

Seven of the year's biggest hits are currently on DVD and on-demand rental services, ready for delinquent film fans to catch up with marathons over takeout. Here's what we thought of them back at their release, and why they're still worth seeing now.

What we said then: "There are issues with Straight Outta Compton that make fully endorsing it difficult. The movie has a significant woman problem, both in the lack of substantial female perspectives in the story and in how the main characters treat women. ... That's a tremendous shame, because Straight Outta Compton is exemplary in so many ways. The filmmaking is more nuanced than you'll find in the typical biopic, focusing on these characters as humans first."

What we say now: The film's woman problem is indeed its most lasting legacy besides its impressive box office take. Success stories like Straight Outta Compton are fantastic news for a thoroughly nondiverse Hollywood, but they shouldn't come at the cost of discounting women. Still, it's worth seeing, if only to be well-versed in the film for any future conversations.

What we said then: "Not since Emily Blunt and Tom Cruise joined forces in Edge of Tomorrow have we seen such an equitable pairing between two people of opposite genders in a herculean battle to save humanity. Even more refreshing is the fact that Furiosa and Max share virtually no sexual tension. By the end of the flick, their relationship is one based on simple respect."

What we say now: The furiously feminist Mad Max is one of the year's true critical and commercial darlings, and deservedly so. Its combination of ambition and inclusivity make it something of a mascot for 2015. It's a must-see for those who haven't yet.

What we said then: "Trainwreck gives a voice to young women who choose to wield their sexuality like a weapon and refuse to prescribe to the idea that pleasure belongs to men. Amy is like a missing piece in the world of female comedies come to finally finish the puzzle. In the movie, as with her comedy, [Amy] Schumer subverts our expectations and opens the door for a powerful new type of raunchy comedy for women."

What we say now: Schumer's 2015 will go down in the record books. Just think of all she achieved: hit film, Emmy Award for her hit TV show and her first HBO stand-up special. Schumer ruled this year in entertainment, and watching Trainwreck is the perfect way to celebrate.

What we said then: "One could argue Amy focuses too much on her addiction, but even that acts as a reflection of the audience. Postmortem, the focus is on Winehouse's music — a brilliant artist lost too soon. She was indeed that artist, but during her life, the public was ravenous for gritty personal details. It all comes together in Amy, which charges that we are partly culpable for her loss. We are to blame."

What we say now: This documentary sticks in the mind largely because of the guilt. Seeing her career laid out, stitched together through archival footage by director Asif Kapadia, paints a tragic picture. This may be 2015's biggest heartbreaker.

What we said then: "Ex Machina is a tiny movie. Its cast is small, the setting is limited to one house for the bulk of the action and the budget is modest for a science fiction project. But its ideas are huge, largely because it takes its central conceit so seriously. What would actually happen if AI were to be a reality?"

What we say now: For such a tiny film, Ex Machina did pretty well for itself. It remains one of the more challenging, mystifying movies of the year. This one's a thinker — watch it if you've got a family or friend group that loves to discuss the film after it's done.

What we said then: "Rebecca Ferguson is the star of Mission: Impossible — Rogue Nation. ... The fresh-faced Swedish actress, who looks a bit like Katharine Hepburn by way of Carey Mulligan, plays Ilsa Faust. She's a double-crossing agent — well, by the end, more like a quintuple-crossing agent — with motives as slick as her fighting style. She's a rogue nation of her own, in it for herself. But her greatest heist isn't in the plot of the movie, it's stealing the movie away from [Tom] Cruise and his cohort of bros with aplomb."

What we say now: Rogue Nation is one of the year's best bits of popcorn entertainment, but Ferguson sticks most vividly in the mind. She has a hefty slate ahead, and it's well-deserved: She's a star.

What we said then: "What's shocking about Spy is that at long last, after movies like Identity Thief, the well-meaning but misguided Tammy and even The Heat, the film's goal is to laugh with McCarthy, not at her. It allows her to be glamorous, skilled and flawed all the same time. Susan is the role — and Spy is the movie — McCarthy deserves."

What we say now: Spy did well for itself, but it got a bit overshadowed in the buzz department by Trainwreck despite making the same amount of money. That's a shame, because Spy is probably the better movie: sharp, surprising and hilarious. It holds up beautifully. If ending the year on a laugh is what the doctor ordered, Spy is just the cure.