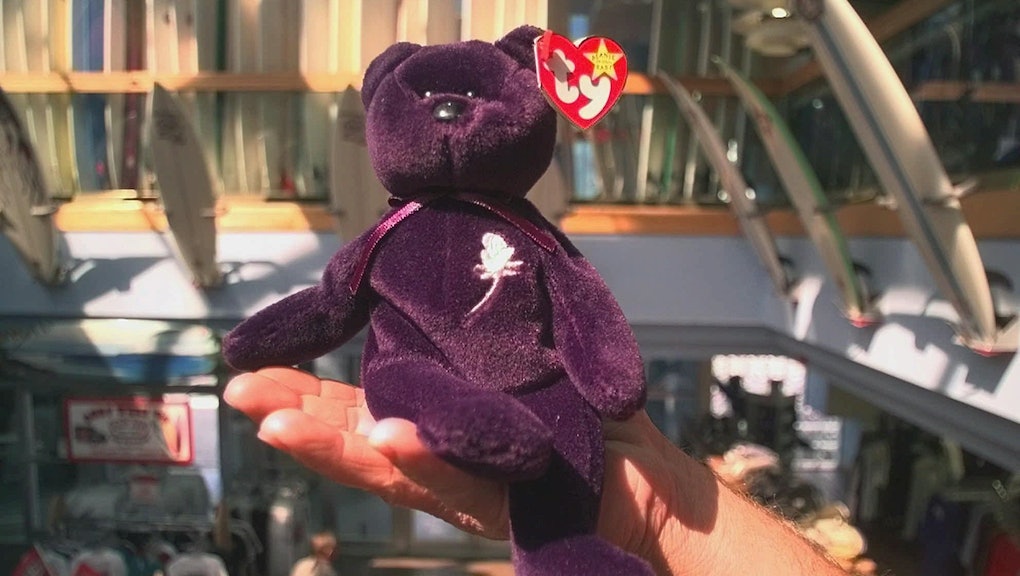 Beanie Babies Used to Help Me Use My Imagination. Now They Hold Kids' iPhones

Every weekend when my brother and I were kids, we'd schlep our 100-some Beanie Babies down to the basement and pretend they were going to school. We'd line them up in rows on the floor, classroom-style, and teach them writing and math. We'd make drawings and sign them with the Beanie Babies' names, as if they'd gone to art class. We called it Beanie School.

Eventually, my cats peed inside the boxes where we kept our Beanies and we had to throw them away — perhaps my most profound coming-of-age moment. But until then, my Beanie Babies helped stimulate my imagination. They inspired me to be creative. They fostered quality time between my brother and me. So many people in their 20s have similar memories of the toys that shaped our childhood.

In news that's sure to crush the hearts of millennials far and wide, Ty, the company behind Beanie Babies, has released a new line of small, plush animals called Peek-a-Boos, whose sole purpose is holding up kids' smartphones. They're not meant to be played with or talked to, or taken to Beanie School — only to sit, smiles stitched to their huge, wide-eyed faces, quietly absorbing the painful jabs of a 4-year-old playing Candy Crush.

"Peek-a-Boos — they hold your phone!" the toys' slogan boasts.

The utter techlessness of Ty's products forced me to use my own inventiveness to have fun. Now, what do brother and sisters with Ty products do? They sit in the car watching iPhone videos of cartoon bees.

And look at this poor dog, desperate for the love and affection of his humans. The kids aren't playing with him — probably because his head isn't shaped like an iPhone stand.

On the plus side, the Peek-a-Boos ad shows a kid using his Peek-a-Boo to hold his phone while he does math homework, so perhaps a fuzzy smartphone stand could help kids get more excited about learning. It shows other kids using their Peek-a-Boos to hold a phone while it plays dance music — a good source of exercise.

Peek-a-Boos might be aimed at Generation Z (or whatever the hell comes after), but they're also, in a way, a symbol for us — the millennials whose childhood joys are gone, replaced by round-the-clock work emails, online-dating woes and halfhearted texts about "getting drinks sometime."

The Beanie bubble started to burst around 1999, and the toys as we knew them disappeared from the cultural landscape as we grew up. Ty, however, has hung on, clinging to relevance. The company has released Beanie Babies spinoffs in every shape and form, from key chains to entire virtual worlds.

Look at those Peek-a-Boos' big, shiny, baleful eyes, peering over the edge of the iPhone. You can almost hear them whispering, softly, "Will you play with me now?"

Peek-a-Boos are the ghosts of millennials' childhoods. Let us fear not that 59% of kids use social media by the time they're 10 years old, but that we, millennials, have left our Beanie School days behind.